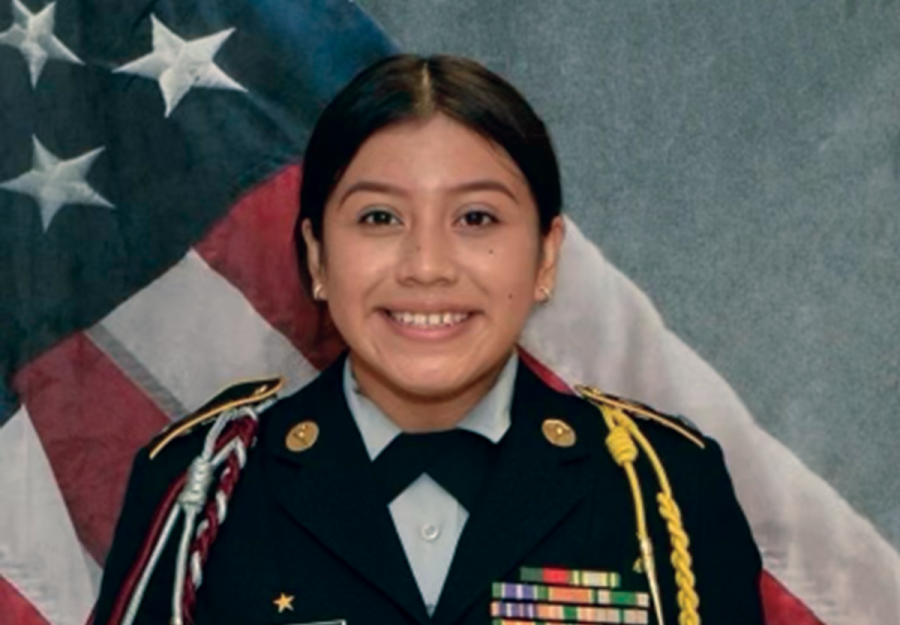 AT ATTENTION: Perla Rodrigues, pictured in her JROTC uniform, plans to enlist in the U.S. Marines.

If you had asked senior Perla Rodrigues what her post-grad plans were two years ago, joining the armed forces would have never crossed her mind. Flash forward to the end of her senior year, and Rodrigues will be enlisting to the U.S. Marines in the fall.

“??During quarantine, a lot of things changed,” Rodrigues said. “I kind of told myself to get out of my comfort zone, do something new. I talked to a Marine recruiter, and I went and I trained for them. It was not more of a physical thing, but it’s more of a mental thing … When a lot of people think of the military, they think ‘Oh, you’re training hard stuff,’ but it’s more hands on, meeting new people, new faces, getting along with people — it’s teaching them, but you’re also learning.”

Rodrigues started in the Junior Leadership Corps at Inman Middle School. This pathway led her to Midtown’s Junior Reserve Officer Training Corps (JROTC) program. Rodrigues credits JROTC with many of the leadership and skills she has gained.

“My biggest achievement is when I first started ROTC, and I didn’t really know anything, and I felt like I was an outsider,” Rodrigues said. “I thought that I wasn’t gonna have a big part in the program, but looking at senior year, I know how far I’ve come.”

Rodrigues’ plan to join the military was not a clear-cut path. She credited the role of trying new opportunities in her decision-making process, pre and post Midtown.

“I know definitely the first two years of high school, I was planning everything out, and then I just felt like that wasn’t really working in my favor,” Rodrigues said. “So, I was like, ‘Oh, let me try something different,’ and I feel like that’s so much better. I don’t know what to expect, but I’m learning as I go through it.”