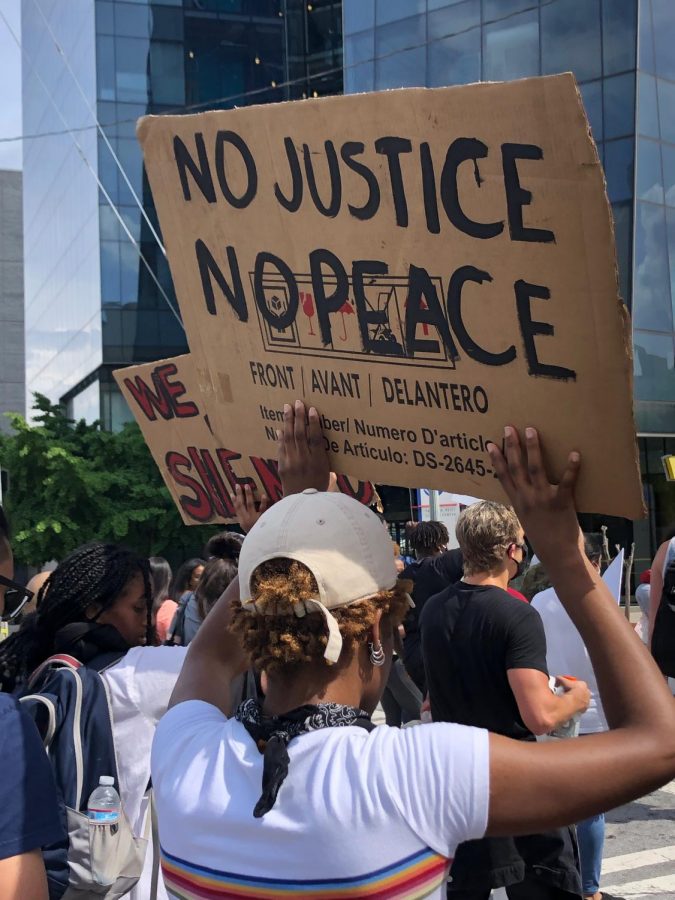 A participant of the March 29 protest against police brutality holds a sign saying “No Justice, No Peace.”

Self-proclaimed pacifist tired of ‘innocent people of color being murdered’

It’s crazy to think that it’s taken so many years for people to finally reach the limits of what they can handle when it comes to police brutality. Every year, since I was born, there have been countless incidents, recorded and not recorded, of innocent people of color being murdered without any reasonable cause. What is happening now, the outrage that Americans are now expressing due to George Floyd’s murder, is quite terrifying to witness but also strangely comforting.

I used to always wonder what it would look like for Americans to finally come together and say that enough was enough. I wondered what it would look like for minorities to band together and help each other in times of need. I wondered what it would look like for everyone to put their differences aside for one minute and focus on the true abomination: the widespread and blatant racism the American system has perfected. And now, here it is. People all over the country are coming together to protest and demand justice. It’s awful to witness with your own eyes peaceful protesters getting shot down with their hands up. It’s awful to witness authorities filling the streets and using military tactics to shut up the American voice, a voice that is only asking for peace and justice.

I genuinely never would have thought I’d ever witness something this powerful and impactful. I’ve heard people comment on the rioting and looting some people have resorted to in the past couple of days in the name of this movement. I consider myself to be a peaceful person, and I am a self-proclaimed pacifist. However, how can you blame these people for resorting to whatever means necessary? The only way some feel they can be heard is through so-called ‘violence’. These people have tried the peaceful mean, and where has that gotten them? Tear gas? Bullets? Brutality from the people who are there to supposedly protect the people? These protesters are now doing whatever it takes to be taken seriously. Whether that means rioting or not, it is how they feel justice is going to be enacted.

I really do hope this movement is not going to die down as so many others have done over the years. As a child, I have cried countless times knowing how unsafe my county is, and knowing that any day I could walk down the street and possibly be killed just because of the way I look. That is not okay, and it has never been okay. So, let the protesting happen. I believe that with the way that Americans have been banding together over the past week, with powerful words and with relentless, yet disciplined means of protesting, serious changes can be made to better this country: changes that should have been made centuries ago. Changes that can still be made now.