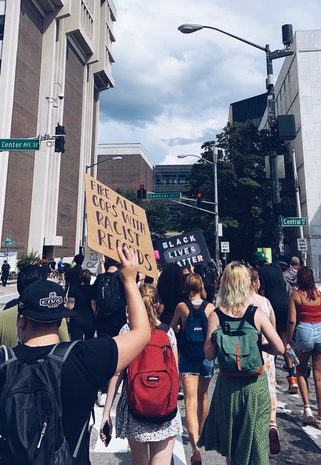 Participants in the Justice For Us protest march through the streets of Atlanta with signs demanding justice for victims of police brutality on May 29.

The majority must be an ally to the minority

On May 25, 2020, Derek Chauvin, a white police officer, knelt on an innocent black man named George Floyd for almost nine minutes, killing him. Chauvin murdered George Floyd. This is not the first time this has happened. Black people are close to three times more likely to be killed by police than white people. Why is that?

We’ve seen this happen before countless times. Ariane McCree was murdered after being shot by two officers in South Carolina. Witnesses said he was “handcuffed, with his hands behind his back, when he was fatally shot.” William Green, an unarmed driver,  was handcuffed and in a police car when an officer fatally shot him in Maryland. Trayvon Martin was unarmed and fatally shot by an officer in Florida. Trayvon was 17 years old. The officer who murdered Trayvon Martin was acquitted at trial after claiming “self defense.” Ahmaud Arbery was shot and killed by two white supremacists for going on a run. Tamir Rice was shot and killed by an officer for playing with a toy gun. He was 12 years old. Akai Gurley and Laquan McDonald were murdered by policemen in 2014. Samuel DuBose, Sandra Bland, Freddie Gray, and Walter L. Scott lost their lives to police brutality in 2015. Terence Crutcher and Philando Castile both met their end at the hands of police officers in 2016. Those are all black people who were murdered due to police brutality. 5 out of 8 of the officers were not convicted. Say their names.

I am tired of seeing black women, men and children being murdered simply because of their skin tone. Being born black in America should not be a death sentence. I thought the police were supposed to protect citizens, not murder them. This is why it is “Black Lives Matter” NOT “All Lives Matter.” If you have five kids and one scrapes their knee, you’re going to give that one  kid a band-aid right? You’re not going to give every kid a band-aid. Being pro-black is not being anti-white. Some might say “police risk their lives everyday for us.” How is killing innocent people “for us”, though? If you’re not protecting all of us, you’re not protecting any of us. Police protect white, straight men. The law enforcement system was built on catching slaves and white supremacy. Chris Rock said, “Whenever the cops gun down an innocent black man…It’s like, ‘Well, it’s not most cops. It’s just a few bad apples.’ But some jobs can’t have bad apples. American Airlines can’t say, ‘Most of our pilots like to land.’ We cannot afford to have any bad cops at all.”

On May 29, I protested among many others for black lives and against police brutality. I marched and listened to very talented and powerful speakers. Atlanta came together that day through love, anger and sadness. That is what makes a city, not buildings. Unity is what makes a city. There was rioting that day; police cars were set on fire. The police maced protestors. Stores were looted. Police started this commotion by grabbing and pepper spraying peaceful protesters. I am neither pro nor anti-riot. I do not agree with violence or the looting of small, local, POC-owned businesses. Looting is different from rioting. But, burning down cities is the only way voices seem to get heard these days. Kneeling for the national anthem is a peaceful protest, but even a peaceful protest faced major backlash nationwide.. Those in power want to silence the people. After centuries of people of color being oppressed, they are angry and tired. Buildings can be rebuilt, George Floyd’s life can’t be. If you are more upset with reactions to injustice than the injustice itself, you are a part of the problem. If we have to set cop cars on fire for justice, then that’s what we’ll do. If you look at the pictures of the fires and rioting, they really are powerful and moving images. This is Atlanta: the people, not the buildings.

To other people of color and minorities, it is our responsibility to stand and be allies to the black community. Aligning ourselves with the oppressor will not bring us closer to equality. Asians, Hispanics, Jewish, Muslims, Native Americans etc., if we succumb to white supremacy, we will just become a pawn in the white man’s game. Minorities have been put through too much to let hate win. This is America: raping and slaughtering Native Americans, slavery, Jim Crow Laws, Asian concentration camps, immigrants in cages at the border, synagogue bombings, attacks against Muslims, police brutality and so much more.. Over centuries, racism in this country has just shifted from one form to another. Let’s take action! Let’s protest! Let’s sign petitions! Let’s volunteer! Let’s donate! Let’s vote! Let’s take a stand! We as minorities and people of color need to be allies to the black community right now more than ever. You can tell us to “go back to our own country,” but this is our country. This country was built off of the people of color. Land of the free, right?

To white people, it is your responsibility to be an ally to the black community. Do everything I listed before along with more. Do not choose to ignore something because it makes you “uncomfortable” or because it doesn’t “involve” you. It does involve you. We are all human beings made from the same energy and matter. You as a white person can help end this vicious cycle of racism. If you’re not already, get educated and educate others. Use your voice and elevated platform to speak on this. Staying silent is siding with the oppressor. By staying silent, you are motivating hate to continue. Be passionate. Don’t be afraid to have opinions. Speak out. Don’t be afraid to stand up. There is no such thing as “being too loud” when it comes to people’s lives. As Angela Davis said, “In a racist society it is not enough to be non-racist. We must be anti-racist.” Change requires all of us.

I am not black, but I see you.

I am not black, but I hear you.

I am not black, but I mourn with you.

I am not black, but I respect you.

I am not black, but I am going to continue to fight until black lives matter in America.