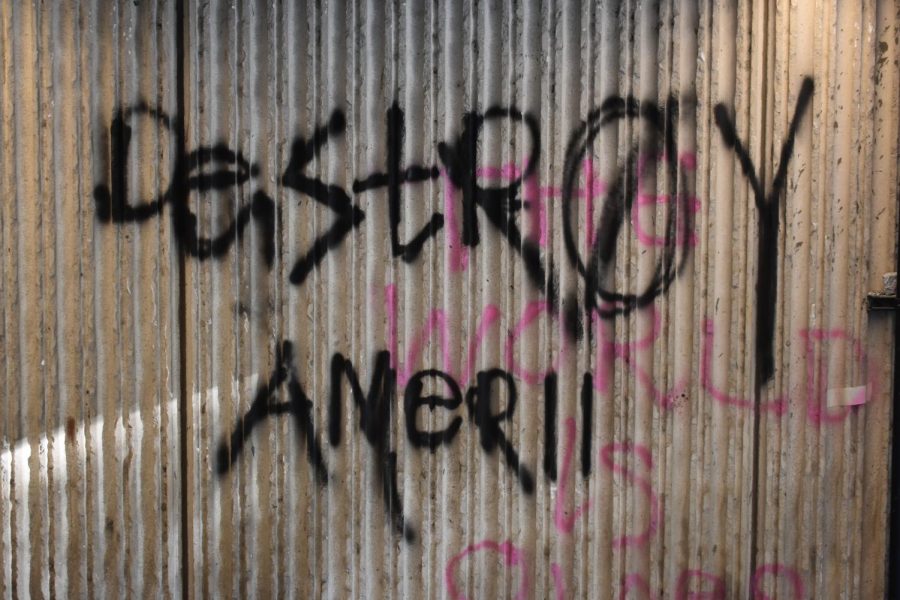 Graffiti is spray-painted on a wall of the Omni Hotel.

A Twitter post by Earl D. Hamilton really spoke to me about the events this weekend. He said, “I just wanna say that it’s okay to be anti rioting, or pro rioting. You’re not racist for believing that justice is obtainable through peace. You’re also not reckless for believing that violence has to be used to make change. Both voices are valid and heard by me.”

Recently, three unarmed African Americans lost their lives due to unlawful violence and negligence from the institution created to “protect and serve” our communities. This week, George Floyd was arrested for allegedly trying to pay with a counterfeit $20 bill, and despite evidence that Floyd never resisted arrest, Derek Chauvin, a white police officer, knelt on Floyd’s neck for 8 minutes and 46 seconds. Floyd repeatedly cried out “I can’t breathe” in a tragic moment captured by video. Sadly, his pleas fell on deaf ears, and he later died in the hospital.

These recent events are absolutely inexcusable and highlight the racial bias that permeates law enforcement across the country. People’s frustration and anger at the police are completely justified; police killings of unarmed African Americans are reminiscent of lynchings in the 19th and 20th centuries, and communities of color are understandably disgusted by the continued lack of police accountability and institutional change. As a white individual, I can’t begin to understand what it’s like to be black in America, but I understand the reasoning and logic behind the riots.

Although the anger felt by individuals engaged in looting is certainly understandable, looting and rioting in our city streets most likely will not change the systemic problems in law enforcement or the American legal system as a whole.

Oppression was by design, so liberation, therefore, must also be the product of thoughtful  strategies. Riots may lead to short-term satisfaction, but that energy should be channeled into different means of resistance, like organizing and voting, to effectively break down systems plagued by structural racism.

Simply put, these actions can hurt communities of color. Across the nation, black and brown business owners were harmed when their businesses were broken into. Additionally, looting helps feed into false narratives and stereotypes about people of color: that they are angry, lawless ‘THUGS,’ as President Donald Trump said this week. These narratives could lead to less public sympathy for grieving communities. Finally, looting and rioting could lead to budget austerity that affects valuable programs. If businesses go under due to the damage and inventory loss, the revenue collected from sales tax and property tax, a significant source of the city government’s budget, could decline. This could result in the city either cutting funding for valuable programs, like those that address affordable housing, or raising other taxes. Neither is a good outcome.

Looting and rioting could also undermine the efficacy of movements that call for institutional change. We live in a democratic society, but we must overcome systemic barriers against people of color. Public opinion channeled into civic engagement can affect the policies put forth by our government. When people come together and are passionate about an issue, we can pressure politicians into immediate action, and if we are still not satisfied, we can vote them out and elect individuals who truly represent the communities they serve. When people, glued to their television screens, see images of burning cars and broken glass, the result of actions committed by a small group of disruptors, those images overpower the much larger group of peaceful protesters exercising their constitutional rights for a just cause. The narrative of the protest becomes violent, which could jeopardize some public support for the movement.

Although nonviolence may seem ineffective and unsatisfying for a community tired of oppression, tired of gradual change, tired of being told to just wait, nonviolence is still an effective strategy to pursue. Which image is more likely to stir up anti-police sentiments: an image of a peaceful John Lewis getting his head bashed in by an Alabama state trooper during the March on Selma during the Civil Rights Movement or a video of people setting fire to a cop car and dancing atop the wreckage? Nonviolence, as proven by the successes of Dr. Martin Luther King Jr., is how movements grow public support for just causes, which translates into comprehensive legislation. Widespread looting and rioting is antithetical to that necessary goal.

Note: Griffin Richie is the brother of the Southerner editor Dana Richie, who contributed to this article.