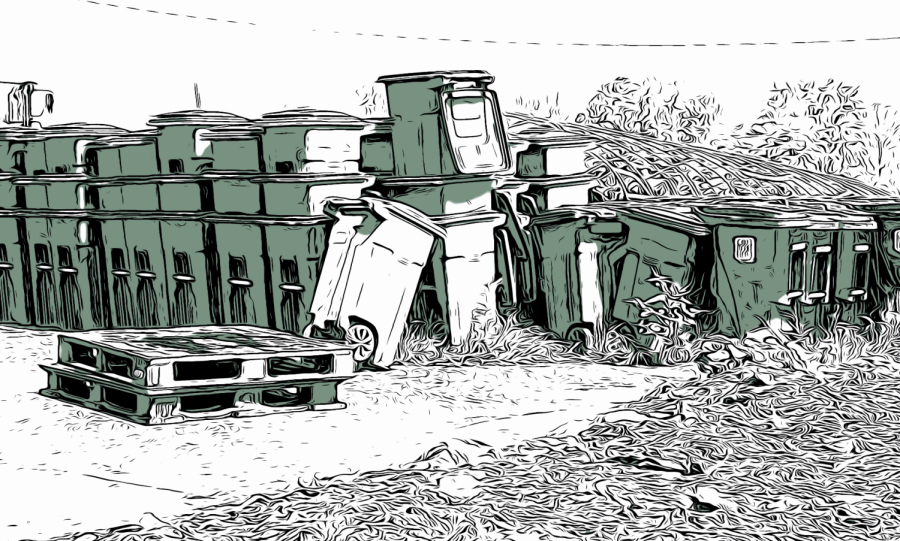 Private company CompostNow provides a weekly composting pickup service in which customers place compost outside their houses to be taken to the CompostNow facility.

While blue recycling bins stand in almost every classroom, evidence of their usefulness remains evasive. A large amount of paper and other recyclables leave campus in trash cans along with students’ food scraps, plastic bags, and dried-up pens, heading straight for the landfill.

In the evenings after school, contracted custodial crews collecting trash often throw materials from classroom recycling bins into the same receptacle as regular trash.
“They dump everything in the same trash can,” said Lawson Yale, environmental science teacher. “I watch it happen.”

School business manager Byron Barnes said he was unaware of the practice, but that he thinks it’s “very possible.”

“Just like we find trash all on the ground out here [in the courtyard], I’m sure that people probably are just throwing things in that wouldn’t necessarily be considered recyclables,” Barnes said.

Waste in recycling bins isn’t always recyclable. In many classrooms, the only trash bins available are recycling bins. Thus, leaving students with no choice but to ignore the bins’ original purpose and toss orange peels or snack wrappers in with the paper.

“I definitely don’t think we [recycle], because the recycling bins they do have, they’re filled with trash,” freshman Carson Lott said.
Bastion Floerchinger, an exchange student from Germany, noticed a lack of recycling bins in the courtyard where students eat lunch.

“The recycling in [Grady], I don’t really see it, but I only see the garbage, and I think everyone throws it in whatever he wants,” Floerchinger said.

Some recycling does reach a recycling-designated dumpster in the back of the school, according to Barnes. There are larger recycling bins in select locations in the school, including in the media center and interactive lab, and the day maintenance staff places that waste in the recycling dumpster. Atlanta Public Schools’ has a recycling program that collects from that dumpster.

But APS’s program doesn’t make up for lost recycling efforts within classrooms.

According to Pierre Davis, AP Environmental Science teacher and Earth Club sponsor, it is up to schools to make sure recyclables reach the right destination. Two years ago, Earth Club tried to take on that responsibility.

“We started trying to go class-to-class and collect recycling from each teacher, take it out, but that was a very, very big job, and we kind of underestimated it,” Davis said.

A lack of student involvement slowed the club’s efforts to a halt, but senior Emily Brown, Earth Club president, wants to pick up the task again.

“Recycling has been a long battle at Grady for many reasons, including people simply not caring and no one taking the time to sort through it,” Brown said. “We plan to buckle down this year, and the club numbers are strong, so maybe recycling will become more successful.”

APS, in an attempt to manage waste and increase sustainability, replaced styrofoam cafeteria lunch trays this year with plates made of compostable material. However, as the school year began, the lunch trays may have turned ecologically friendly, but their methods of disposal remained wasteful.

According to Herb Joseph, APS facilities manager, the district currently does not have a contractor to compost the trays, and as a result, students throw them away with their regular trash.