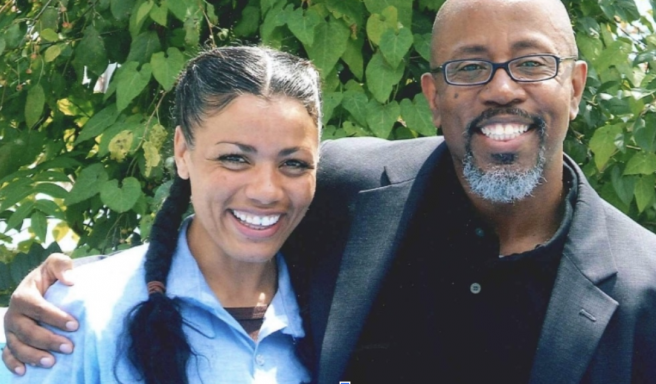 Tyra Patterson, left, with her attorney David Singleton, during her 23-year incarceration in Ohio for a murder she did not commit. Patterson was released on Christmas Day in 2017. (Photo provided by Tyra Patterson)

Tyra Patterson, left, with her attorney David Singleton, during her 23-year incarceration in Ohio for a murder she did not commit. Patterson was released on Christmas Day in 2017.

Tyra Patterson was released from prison on Christmas Day 2017 after 23 years behind bars.

In 1994, when Patterson, who is now an inspirational speaker for groups, including teenagers, was 19 years old, she was charged with robbery and the murder of 15-year old Michelle Lai.

Patterson was innocent, but her attorneys failed to prove that. The evidence that would have proven her innocence was not mentioned in the trial. Patterson made a 911 call once she heard the gunshots that killed Lai. If the call was entered into evidence by her attorneys, she would have been found innocent. Six of the jury members in Patterson’s trial even said they would have acquitted, if they heard the call.

“Six of [the jurors], when they heard the 911 call, were like, ‘Oh my goodness. We never would’ve convicted her had we heard that at trial,”’ said David Singleton, who became Tyra’s attorney and close friend.

On the night of her arrest, the police threatened her, forcing her to make a false confession. Using that confession, the state of Ohio prosecuted Patterson, and she was convicted. Patterson’s sentence was 43 years to life in maximum security prison.

Despite the injustice, Patterson has accomplished more in one year since her release than many have in a lifetime. She is a paralegal and the Community Outreach Strategy Specialist for the Ohio Justice & Policy Center. She has joined the Antonelli College’s Professional Advisory Committee, and was honored by the City of Cincinnati for improving the city. She is project manager of a social justice mural, and she has initiated a program called “Something Warm” to help give back to the homeless.

Gideon’s Promise trains public defenders who work in harsh systems to be client-centered advocators. Patterson shared her story, and she explained the importance of caring and fighting for clients because if she was given a public defender who fought hard for her from the start, she would not have spent 23 years in prison.

Despite imprisonment for a crime she did not commit, Patterson took the opportunity to improve herself. She went into prison with only an elementary school education and didn’t know how to read and write. She left prison with the ability to not only read and write, but she also became a certified tutor, a licensed engineer, and a certified paralegal. She completed over 300 educational programs.

“I just self-taught,” said Patterson. “I made an education out of prison.” 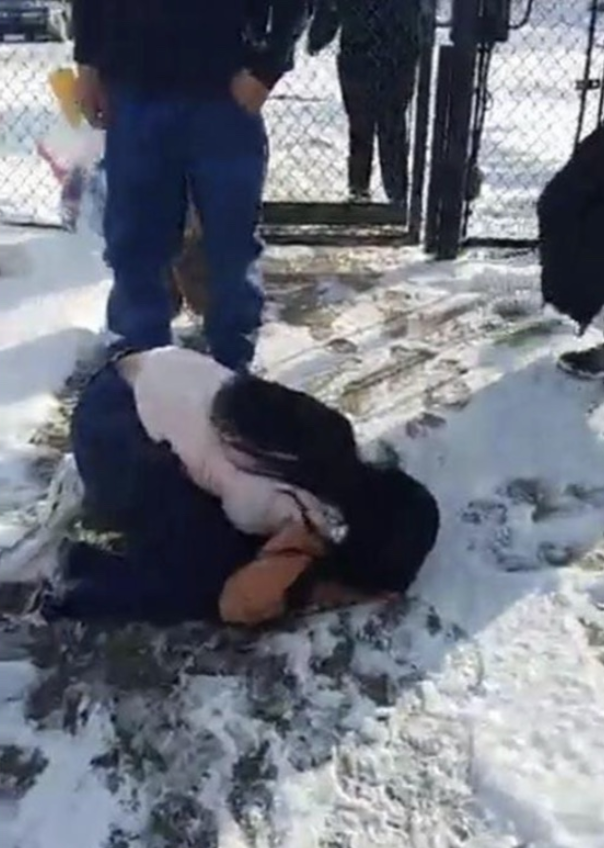 Tyra Patterson kisses the snow-covered pavement upon her released from a 23-year prison term on Christmas Day in 2017.

“It wasn’t until 2012 that I finally said, ‘Okay, let me go meet Tyra,”’ said Singleton. “In the 15 minutes that we had, she told me that she was innocent, but the thing that really grabbed me was the spirit that she has. I saw her humanity. I saw this amazing resilience and kindness. She just had this aura that just cried out for me to do everything I could to help her.”

Singleton agreed to look into her case and do everything in his power to help get her out of prison. While he realized Patterson did not belong in prison, he also recognized that getting her out would not be so easy. Patterson and Singleton decided to gather evidence in order to file for clemency since there was no new evidence to retry her case in court.

“We decide to ask for a pardon,” said Singleton. “For nine months, we were putting together a clemency campaign for her.”

Singleton and the OJPC gathered lie detector tests from co-defendants, evidence that Patterson’s counsel failed to bring out in trial, and hired a false confession expert to show the parole board and the governor that Patterson deserved to be released.

“It was harder to fight to get out of prison than to go inside the institution,” said Patterson. “I was denied a hearing, and when that happened, David built a coalition around me.”

The denial of a hearing for clemency did not stop Patterson and Singleton from fighting for her freedom. In December of 2013, Singleton and Patterson met with the false confession expert and came up with another method to free Patterson.

“We decided at that point, that one of the best strategies we could have was to bring people from Governor Kasich’s party, conservative Republicans, in to meet Tyra and see her humanity,” said Singleton. “People needed to see that same spirit that grabbed me when I first met her. It wasn’t enough for us to just [talk] about her case.”

After about a year of gathering powerful politicians to meet Patterson, the governor’s office convinced the parole board to give her a clemency hearing. In the middle of 2015, the parole board denied Patterson’s request.

“It was a complete beatdown,” said Singleton. “The board was angry at us because we basically went around them and got these important people to talk to the governor’s office.”

In January of 2016, The Guardian, a daily newspaper in London, England, did a three-part series on Patterson’s story, which brought national attention to her fight for freedom. Then a few months after the series was released, Singleton met with Holly Lai, Michelle Lai’s sister, on Michelle’s birthday at her grave site.

“She said, ‘The reason I’m here is because Tyra is innocent,’” said Singleton.

Holly wrote a letter to the governor proclaiming Patterson’s innocence. The governor used his power to push the parole board to give Patterson a hearing. On Oct. 24, 2017, Patterson was granted clemency.

“When I found out I would be released, I felt vindicated. I felt deserving,” said Patterson. “I felt instant freedom. I also felt bittersweet because when I was in prison — those women, I was with them for 23 years. They became my family, and I was leaving them behind.”

After over two decades of being locked away, on Dec. 25, 2017, Patterson walked as a free woman for the first time in 23 years. In the below-freezing weather, Patterson walked out of the prison with no coat, fell to the ground, and thanked God for her freedom.

“I knew it was real, but it was almost like it was a dream,” said Singleton. “I can’t even really describe it. I don’t think I’ve fully processed that moment.”

Less than a month after her release, Patterson started working as a paralegal for OJPC. In less than two months, she was promoted to Community Outreach Strategy Specialist for the organization.

“I do litigation work inside prisons,” said Patterson. “I make sure prisoners’ rights are being met.”

Tyra not only works with the OJPC to fight for the rights of prisoners, but she is also working to build a program that helps with the re-entry back into the community of formerly incarcerated people.

“There is a need in our community to have more resources for returning citizen,” said Patterson. “I take full advantage of opportunities to build a bridge over the gap.”

Tyra Patterson’s story is not over yet. Despite her struggles for freedom and justice, Patterson continues to work to humanize those who are incarcerated, and she has devoted her life helping reform a criminal justice system that can lock away an innocent woman for 23 years.

“People need to know that we are not just people who came from prison,” said Patterson “We have great talents and deserve equal opportunities.” 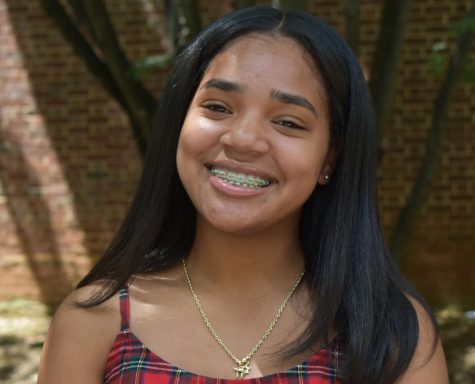 This is Aaliyah's first year writing for the Southerner. When she isn't writing, she is either running hurdles on the track or practicing her closing arguments... 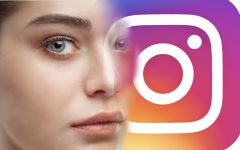 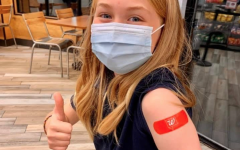 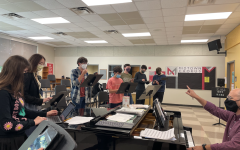 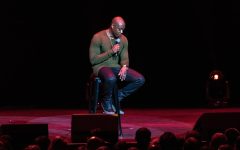 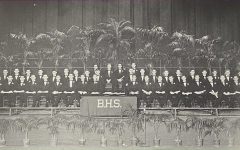 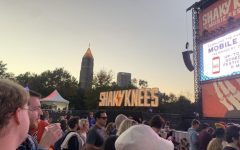 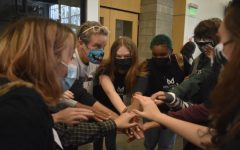 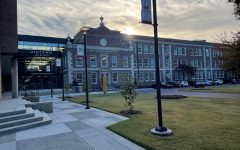 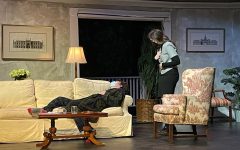