the Southerner Online • May 26, 2022 • https://thesoutherneronline.com/88755/lifestyle/ae/junior-finds-passion-in-arts-fashion/ 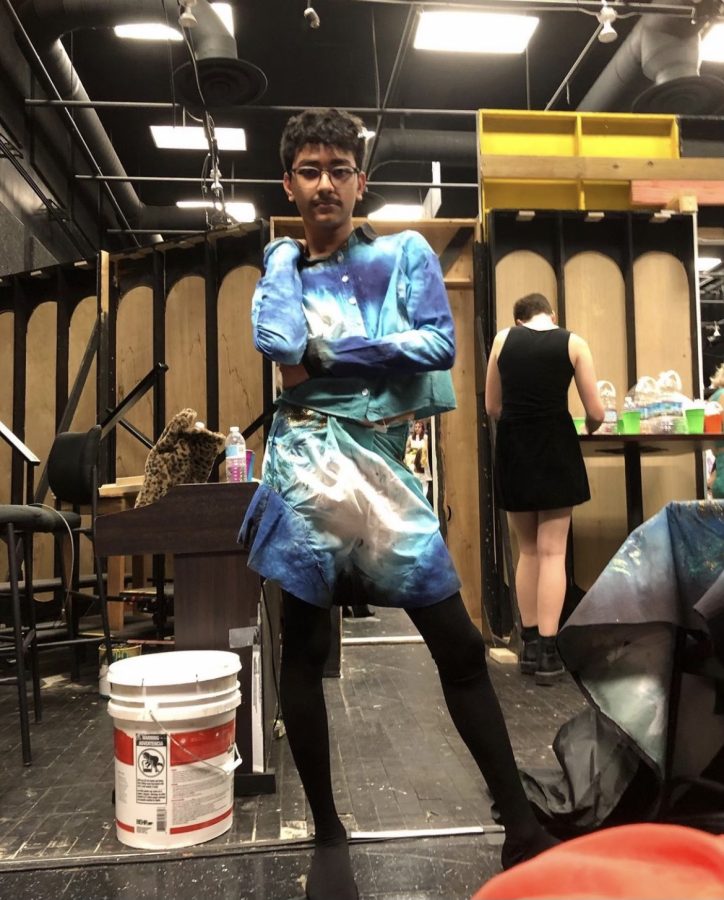 A year ago, junior Dipesh Aggarwal had no idea he would be moving 9,000 miles away from his home in Bangalore, India to Atlanta. Within eight months, Aggarwal has become a leading student in Midtown’s fashion and art programs.

“As soon as I came here in September, I was really excited about the Fashion Club because in my old school, we didn’t have anything like that,” Aggarwal said.

Aggarwal’s passion for fashion developed when he was young and has since prospered.

“When I was small, like, first or second grade, I used to tie my blanket around my waist,” Aggarwal said. “Now, I like wearing skirts and stuff, and I want to make my own clothes.”

Since September, Aggarwal has put endless effort into his fashion pieces in preparation for the fashion show, which was held April 30.

“The Fashion Club is bi-monthly on Wednesdays; so, because it doesn’t happen often, I have to go in during lunch to complete my sewing and stuff,” Aggarwal said.

Aggarwal participated in the 2022 fashion show and says that his friends and teachers have encouraged him in his fashion work.

“It was great,” Aggarwal said. “People in the back room were very supportive of my clothes and were saying that they looked really good.”

“The fact he opened the show is a huge testament in my belief for him,” Williams said. “Not only did he make his outfit for a fashion club, but he modeled his outfit, as well. His passion for fashion and design is unparalleled. I think he’s going to go far whatever he chooses to do with it.”

Freshman Piper Boatright is in the Fashion and Art Club with Aggarwal and says that she has noticed that he has improved significantly since the beginning of the year.

“It’s absolutely incredible,” Boatright said. “He didn’t know how to sew at the beginning of the year, and then he just like, dyes all of his own clothes, which is absolutely amazing.”

Aggarwal says his parents have grown to be very encouraging of his art and fashion.

“My father has always been supportive, and slowly, my mother has started understanding me;now, she’s kind of fine with it,” Aggarwal said. “At the fashion show, they were both very supportive.”

Aggarwal plans to go to fashion school after he graduates. However, Aggarwal says his parents originally wanted him to go into computer science because of the higher wages.

“My mother’s only condition is that I have to get into the top 10 colleges of fashion because fashion earning is low; so, going to top colleges will get higher earnings,” Aggarwal said.

Aggarwal hopes to go to a fashion school in New York City, specifically the Fashion Institute of Technology or Pratt Institute. As admissions for fashion schools are fairly competitive, Aggarwal says he feels a lot of pressure to get in.

“I think I need the pressure to do it; It’s good pressure,” Aggarwal said.

Aggarwal’s mother, Swati Aggarwal, is optimistic for her son’s future.

“He is trying his best to get into a top fashion school;so, we’ll see if he gets in or not,” Swati Aggarwal said. “I hope that he will get into a good fashion school so that he can pursue whatever he wants to do when he grows up.”

In addition to fashion, Aggarwal developed a passion for art at an early age.

“My mother used to say that when I was one year old, I used to just scribble drawings, and it became very special abstract art,” Aggarwal said.

Since his early days of abstract art, Aggarwal has enriched his art with intricate details. Aggarwal enjoys doing art from the form of watercolor to drawing with chalk.

When Aggarwal learned about the Midtown Art Club, he was beyond eager to join. He participated in the Art Throwdown competition shortly after joining.

“In Piedmont Park during the Dogwood Festival (April 8-10), we had to do something interactive, something fun on the sidewalks with chalk for the competition. I got second place,” Aggarwal said.

“I got a job at the High Museum, and I’ll be starting in summer. I will be planning events and then throughout the year, we’ll be implementing those plans,” Aggarwal said. “I am also in the digital design class.”

Aggarwal imagines himself going back to India later in life to pursue a career in art.

“After college, I want to go to rural places in India and discover traditional Indian art forms over there,” Aggarwal said. “Discovery channels show documentation of people going and exploring art, and it inspired me.”

To graduate, Aggarwal had to take a full year of only core classes, which restricted his involvement in art and fashion at Midtown. Despite this, Aggarwal managed to dedicate his time to his passions. Art teacherJohn Brandhorst admires Aggarwal’s commitment to art.

“He’s got a lot of potential,” Brandhorst said. “He’s worked very, very hard. He’s got lots of different ideas to go in many different directions, and that’s the kind of diversity of imagination that I look for. He’s able to develop complex surfaces and really interesting ideas that go beyond the simple, memorable subject matter. I look forward to seeing what he does next year.”

For Brandhorst, Aggarwal’s ability to adjust to Midtown, along with being involved in Midtown’s extracurriculars, is astonishing.

“He’s kind of a triple threat, you know, him coming to America, finding a school, and immersing himself so deeply in the possibilities is a really great testament to his bravery, his tenacity, his openness to what comes next,” Brandhorst said.