the Southerner Online • May 26, 2022 • https://thesoutherneronline.com/88752/lifestyle/freshman-johnson-finds-success-in-business-camp-zimmer/ 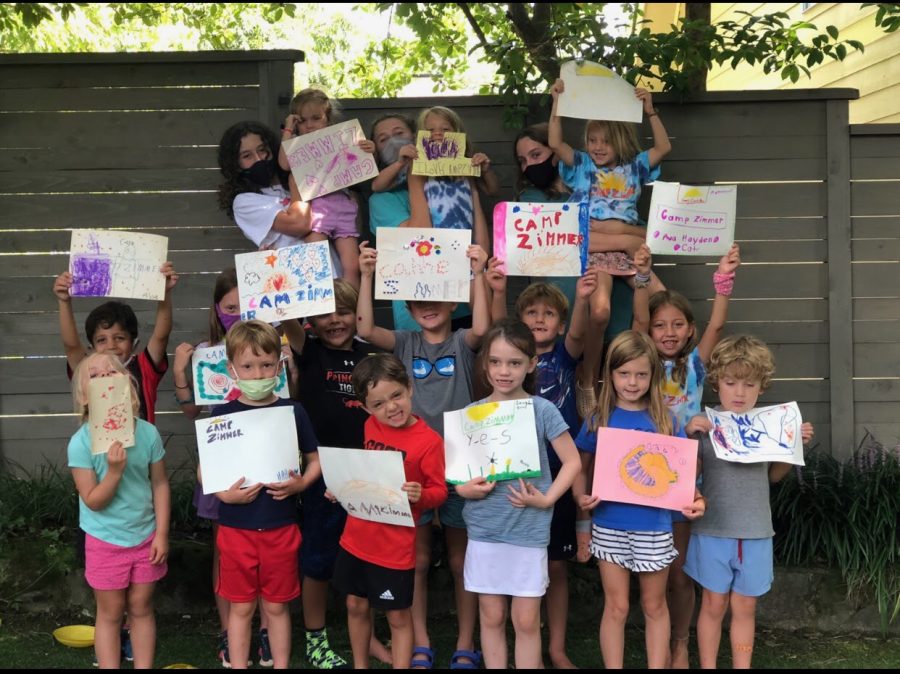 Campers and counselors pose for a final picture before the end of camp.

Freshman Ava Johnson has made thousands of dollars by creating a backyard camp called “Camp Zimmer,” counseling kids during the summer and over breaks throughout the year.

Johnson was influenced by her brother, who created a Christmas tree business, and wanted to do something similar.

“I was inspired to create this camp because I wanted something unique to add to my resume,” Johnson said. “The idea to start a business was inspired by the success my brother had selling Christmas trees in high school.”

Struggling to find a real job as a 14 year old, Johnson had the idea to start a camp.

“I wanted to find a way to make money and realized how much I make from babysitting,” Johnson said. “I thought that by starting a camp, I could make the hours flexible for my schedule while also increasing what I would make normally from babysitting. I didn’t think I was actually going to go through with the idea, but one day Cate and I got the motivation to clean the garage and the business progressed from there.”

Johnson’s mother, Christy Johnson, was hesitant to the idea.

“I didn’t think it was a good idea because I thought that working with that many kids would be really hard to manage for someone her age,” Christy Johnson said.

Johnson faced problems early on, including finding a location and clients.

“There was tons of preparation,” Johnson said. “At first, I didn’t even have a place to hold the camp. I asked my friend Cate [Barton] if she wanted to help me since her garage was perfect. We had to completely clean it out and started to babysit the kids in the neighborhood to see if their parents would be interested in attending the last-minute camp.”

Johnson said she was thrilled when the first week of her camp made a large sum of money.

“At the beginning, my customers came from people seeing the flyers,” Johnson said. “I was so excited when I realized that I had some campers coming the first week. I was in shock. I was making a lot of money in such a short amount of time.”

This summer, revenue hasgrown, and Camp Zimmer is expected to make approximately four times what it did the year prior.

“It has become much more organized, and I am learning a lot more about how to market,” Johnson said. “I also just started making a website to make it easier for parents to get information regarding the camp and to make signing up more straightforward.”

Taylor Poncz, mother of three campers, said she appreciates the effort and commitment.

“It’s so convenient,” Poncz said. “They do a really good job keeping the kids active and engaged. Also, it’s affordable. The kids love going, and they want to keep going.”

As more kids have started to attend the camp, Johnson has started to hire her friends as employees.

“A lot of my friends were very interested in what I was doing;so, when there are a lot of kids in one day, I hire them to help me out,” Johnson said.

Julia Barton, who works for Johnson, said she was excited to work at Camp Zimmer since she was too young to get a traditional job.

“I decided to work at Camp Zimmer because I wanted to support my sister and her friend’s business,” Barton said. “They were succeeding and growing, and I felt very drawn to the idea. I wanted to help out with the kids and make the Camp Zimmer experience achieve its full potential.”

Barton has loved the guidance Johnson has given her.

“Ava is the best boss you could ask for,” Barton said. “She is so nice and funny, and just amazing to be around. She really lights up the mood of the camp and makes the experience so awesome. Ava is great with kids and knows how to make them happy. She is so artistic and is just a huge inspiration to me.”

Campers, including Jad Duwayri, also look up to Johnson.

“Ava is really kind and helps me with my arts and crafts,” Duwayri said. “The counselors are my favorite part.”

Despite Christy Johnson’s skepticism of the idea, the business has grown on her.

“I’m so glad that she did it, and I love that she has created a successful business,” Christy Johnson said. “I am super impressed with what she has done. When she told me how much she was making, it blew me away. She has completely proved me wrong and has made something super successful that I am very proud of.”