the Southerner Online • May 25, 2022 • https://thesoutherneronline.com/88749/lifestyle/stories-of-asian-americans-exemplified-in-midtown-community/ 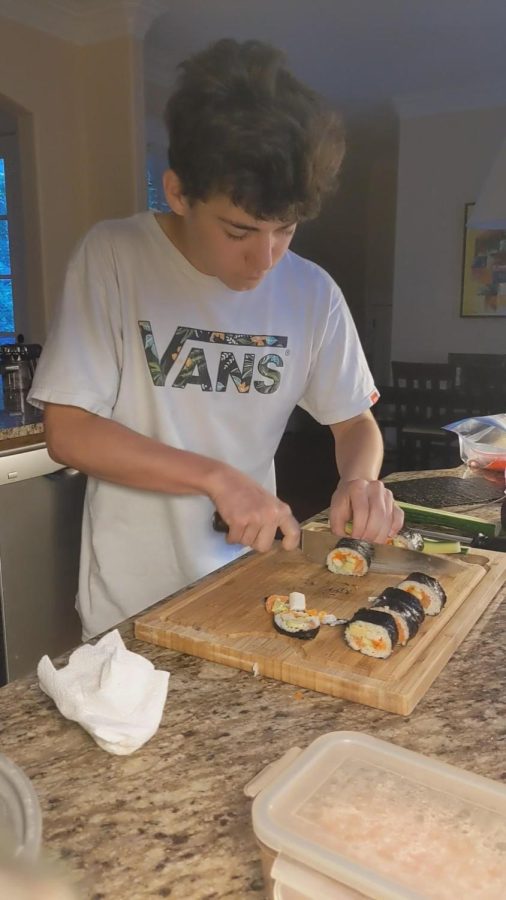 Sophomore Sawyer Miyake prepares sushi for the upcoming lunch period. Miyake, whose family is originally from Japan and lived in Hawaii before it was claimed by the United States, enjoys connecting to his heritage through food.

During the month of May, Asian Pacific Heritage Month is celebrated throughout the United States. Officially designated in 1992, the month honors the accomplishments and culture of Asian Americans and Pacific Islanders.

Junior Sophia Wang, a student of Chinese descent, thinks the celebration of a unique Asian culture is a sign of respect.

“Celebrating Asian Americans is important because, oftentimes, immigrants get assimilated into American culture rather than remembering their own culture,” Wang said. “Celebrating [their culture] helps us remember to honor our culture and our ancestors.”

Sophomore Sawyer Miyake, whose family is originally from Japan and lived in Hawaii before it was claimed by the United States, recognizes the significance of the month in honoring the contributions Asians have made to the U.S.

“I think [Asian Pacific Heritage Month] is important just because there’s been a lot of American history that has been influenced by Asian history,” Miyake said. “I feel like it’s nice to appreciate that.”

Sophomore Andrew Nguyen has Vietnamese roots and recognizes the month of May as a celebration for Asian Americans.

“I’m pretty sure we chose May [as Asian Pacific Heritage Month] because it was [when] the first couple of people of Asian descent came to the U.S.,” Nguyen said. “And then on top of that, [Asian Pacific Heritage Month] represents our history and that of all the people in Asia. The fact that we can get representation and the fact that we can raise cultural awareness is really good.”

Nguyen also notes that his pride in being Vietnamese, and Asian in general, lies in the close relationship he shares with his family members. Freshman Neelam Parsons, who is of Indian descent, builds upon the focus on family in Asian culture.

“I’m proud of being Indian because I know that I have a huge family that will always back me up,” Parsons said.

Relating to family in Asian culture once again, Miyake’s grandfather, who is ethnically Japanese but born in Hawaii, wrote a book about his journey across the continental United States.

Stories from older family members are an apparent connection between generations of Asian-American families. Nguyen’s grandfather shared his experience with a specific situation during the Vietnam War.

“My grandfather fought on the side of the U.S. in the Vietnam War,” Nguyen said. “Because of it, he was imprisoned for a really long time in Vietnam. They were like, ‘why would you work with the Americans?’”

Sophomore Arshia Larestani moved to the United States directly from Iran at age 7 and has had his life split between the two countries.

“My parents both saw the state that Iran was currently in and neither of them wanted me and my sister to grow up in the same situations that they did,” Larestani said. “They did really all they could to move to America because they didn’t want us growing up in a dictatorship country with hardly any freedoms.”

Larestani has liked his time in the United States thus far, other than his family’s struggles to receive legal documents from the government.

“There are quite a few legal documents we are missing, including green cards, work permits mainly for me and my sister, and court callings to go get our green cards,” Larestani said. “The reasons we aren’t getting them are the pandemic and the fact that we are immigrants, so of course, there’s not going to be anyone rushing to get our documents.”

“I’m proud of being Asian American because I am a first-generation American, meaning my mom immigrated here from China by herself,” Wang said. “I’m so proud of everything my mom has done to make our lives here better.”

Senior Futa Kakinuma will be attending Georgia Tech next school year, and his family is originally from Japan. He thinks that the low representation of Asians speaks volumes about the current social climate.

“I do feel like there’s a lack of representation for Asian people in general, and also feel like everyone should be celebrated,” Kakinuma said.

Asian representation in the United States is a debate among Asian-Americans. Larestani thinks that Asians are relatively influential in American society, but the welcoming of Asians and, specifically, Iranians, into the United States needs to improve in the future.

“People should grow to be more tolerant towards [Asian Americans],” Larestani said. “All it takes is just to know more about the world. There are some events such as the Iran Hostage Crisis that have caused most average Americans here to grow very hateful for no reason toward every Persian citizen. However, my overall theory is that the acceptance of Persians should improve, just not as fast as people expect.”