the Southerner Online • May 24, 2022 • https://thesoutherneronline.com/88739/lifestyle/ae/historic-nostalgic-plaza-theatre-plans-for-future/ 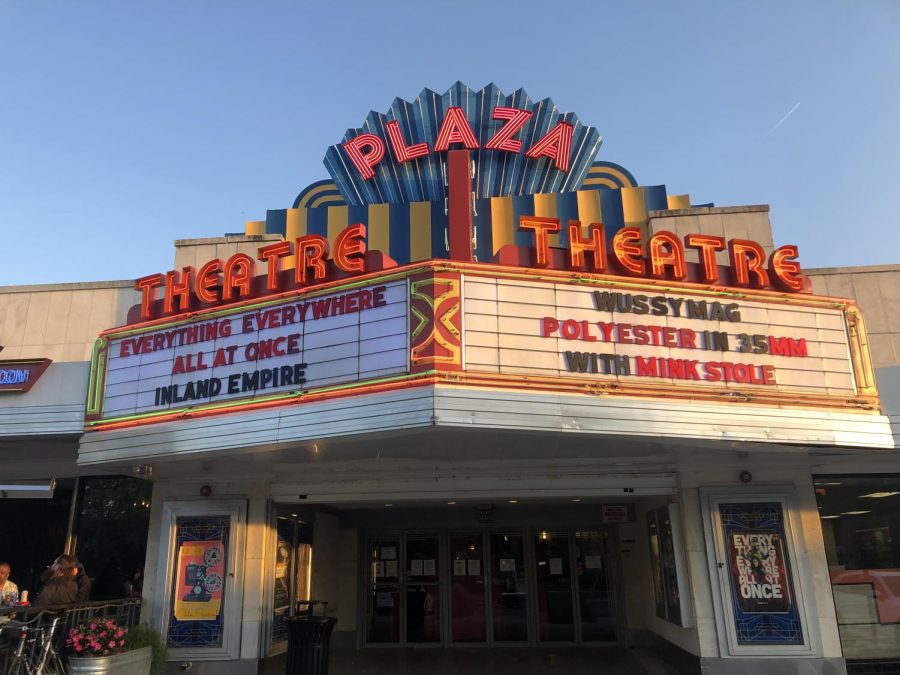 The Plaza Theatre, located in the heart of Poncey-Highland, is the only independently-owned theater inside the Perimeter. The building maintains a vintage feel while still adapting to modern changes.

Located in the Briarcliff Plaza Shopping Center, the Plaza Theatre remains the only independently-owned movie theater inside the Perimeter.

As the longest operating theater of its kind, the city has recently deemed the Plaza a historical sight. The Plaza remains a classic way to look back in history, while appealing to movie-watchers today.

The Plaza first opened in 1939 as one of several local movie theaters in the area. The building only hosted 600 seats and debuted classic films such as “Gone with the Wind” and “Singing in the Rain.” The shopping center was an area filled with entertainment, such as Blick’s Bowling Alley and the Majestic Diner, which remains to this day.

“The Plaza opened during the biggest year of cinema,” owner Chris Escobar said. “This was pre-television; so, people were going to the movies three to five times a week, and the Plaza served as a comfortable, vintage, convenient and unique neighborhood theater.”

As the number of independently operated theaters began to diminish in the late 1970s, the Plaza remained in service. Every year since the Plaza’s opening, the theater has found more success than the last despite the rising number of competitors, such as AMC and Regal Theaters.

“During the 60s and 70s, more people were moving out to the suburbs, which caused a problem for us. What made it possible for the plaza to defeat the odds was when we started showing arthouse programming, meaning foreign films, independent films, classic films and local films,” Escobar said. “We started doing better and better every year.”

However, several challenges have arisen for the Plaza — most recently the pandemic and subsequent lack of customers.

“Twenty twenty was on track to be the biggest year that Plaza had seen in decades until the Pandemic,” Escobar said. “I think movie theaters were unfairly hurt; more people were willing to go to a bar or restaurant. People came out to support us through donating to fundraisers and buying merchandise, which showed us we could make it through anything.”

Another obstacle faced by the Plaza and movie theaters across the country is the increased popularity of at-home streaming. While many prefer the movie-watching experience, it can be easier and cheaper to watch from home.

“I am always up to see a movie in theaters, but sometimes, it can be either really expensive or inconvenient,” junior Elizabeth Martin said. “I drive past the Plaza a lot and have been meaning to check it out — it just makes it hard when I have a laptop at home.”

While there may be certain benefits to using platforms such as Disney Plus and Netflix to watch movies from home, the Plaza creates a memorable experience and a unique atmosphere.

“I have been going to the Plaza since I was really young, and it’s just been a go-to for my family,” junior Cecilia Rice said. “We love the atmosphere and the cool architecture, plus the prices are really cheap and reasonable. It feels nice to be supporting a small business.”

Rice encourages others to support locally-owned shops and businesses because of their impact on the community.

“I know the Plaza is important to people;so, when I heard that it was almost closing, it was so sad because of how low the prices are already,” Rice said. “It makes me feel good to know that I am helping a small business and supporting such a cool place, as opposed to Phipps or AMC.”

In addition to reduced prices, the Plaza offers specialized events where classic films are displayed and catered to a sense of nostalgia and viewers who wish to appreciate the “best films of all time.”

“Some of our biggest movies like ‘Rocky Horror’ or ‘Clueless’ can be easily watched at home. For us, it’s more than just the movie, it’s about the experience,” Escobar said. “There is no better way to watch classic films or new ones than leaving your house with your friends, family or neighbors and coming to see films the way they were meant to be seen.”

With a nearly $4 million renovation underway, Escobar hopes to restore the space while maintaining its historical charm.

“The plan is to include two 50-seat screening rooms where the balcony is located, bring back an old-school ticket booth, install an art-deco inspired concession stand and bar and create a more extensive backstage dressing room,” Escobar said. “We want to maintain the feel of the 1930s.”

While changes are being brought to the interior of the Plaza, Escobar hopes to draw in new customers and maintain the look and feel of a movie theater from the 1930s.

“Change can be expensive, but it is definitely needed,” Escobar said. “People feel like they are walking back in time when they walk through the front doors;so, I want to keep it that way.”