the Southerner Online • May 10, 2022 • https://thesoutherneronline.com/88664/sports/new-head-coach-tackles-football-woes/ 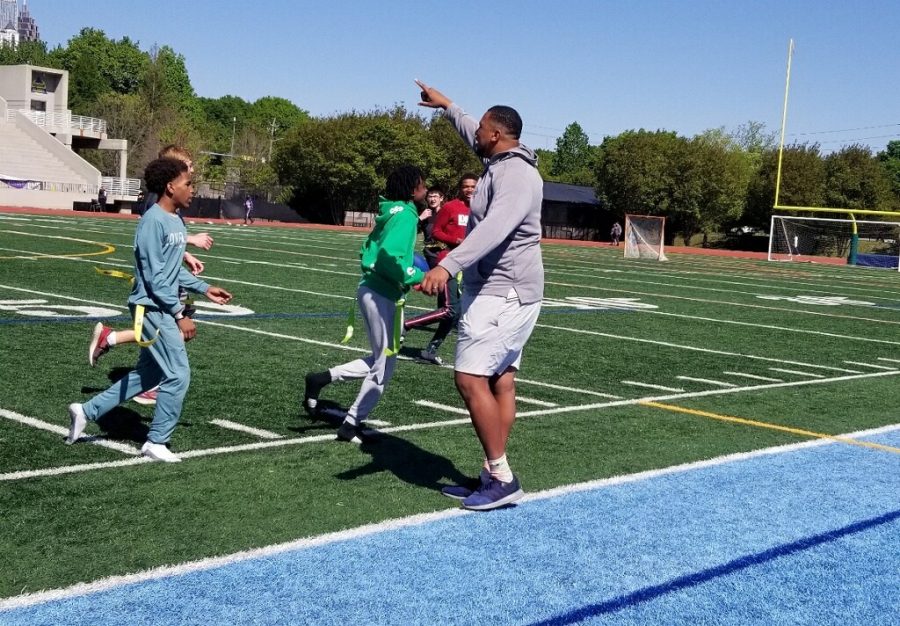 Darrell Howard has been named the new head football coach, replacing Kevin Clark. Howard comes to Midtown from Hampton High School, where he was an assistant coach for four seasons.

At Hampton, Howard was named Coach of the Year twice and helped the Hornets to their first-ever playoff run and first-ever record above .500. He served as a co-offensive coordinator, working to make play calls on the offensive side of the ball.

Before his time at Hampton, Howard was an assistant coach at Creekside and North Springs. Howard played college football as well, playing at Middle Tennessee State University and Albany State University, where he got his degree in education in 2010.

At Midtown, Howard is preparing for the upcoming season. The 2021 varsity season was cancelled after a 67-0 first game loss at Fayette County.

“We have already started practice,” Howard said. “I came March 31st and met with the team because it is important for me to start right after spring break. You know, we are behind the eight ball. This morning [April 13] we had our first of what I call ‘Midtown Madness practice.’ That goes from 5:30 am to 7:15 am. We’ve had a great turnout number.”

“We looked at a lot of different candidates; obviously, we wanted to find the best candidate possible, but we were definitely looking for someone who had a lot of energy, a lot of passion, and understood what it takes to build our program from where it is now,” Johnson said. “I think that coach Howard’s biggest strengths are that he is really energetic, has a great personality, and has shown the ability to connect with a lot of different people that are going to be involved with the program. I think that students will relate to him really well, and he is hungry to turn around Midtown football, and that’s what we are working on.”

Junior tight end Liam Doherty seconds Johnson’s assessment of the new coach. Doherty said he noticed a change in coaching style  when Howard started, and he thinks this change can be beneficial to the team.

“I’ve really liked the new coach,” Doherty said. “He isn’t excessively punishing us for our mistakes and doesn’t just wait for us to mess up; instead, he tries to relate more to us and is just a positive person all around. It’s brought a lot more energy to the program.”

During the preseason, Howard aims to get students engaged with the program and to fill the remaining empty slots on his coaching roster.

“The biggest goal is to get the kids involved,” Howard said. “We have a community outreach event coming up called ‘Midtown Madness’ that I am working on with Athletic Director Patrick Johnson and Principal Betsy Bockman. Hopefully, we can pull kids from the middle school and kids from the community in.”

“I understand that some processes are going to be slow, and we have to do some things that the kids are interested in,” Howard said. “It’s the 21st century, the modern day, so a lot of the football that I have learned is outdated; so, I am coming in with a new mindset, not being stubborn. I am taking suggestions from younger coaches, and just seeing what the kids are good at and honing in on those skills first.”

In addition to Howard’s goals to make the football program enjoyable, competition and capitalizing on the pipeline of students from Howard Middle School is also very important to him.

“My biggest goal for the program this season is to be competitive,” Howard said. “I feel like if we can go .500 and make some noise, we will have some kids come back and be interested in the program. Another big goal is to capture all those middle school kids from Howard, to make sure that they come to Midtown and know that they have a coach that cares about them.”

Johnson said the first priority is to fill the roster.

“Obviously being able to put together a big enough roster to make sure that we can continue the whole season is number one, and I feel confident that we will be able to do that,” Johnson said. “Past that, it is building off the success of some of our younger guys last year, continuing to develop our players to get better, and to continue to try and compete in every game we have on the schedule.”

With no playoff possibility due to the non-region schedule, the Knights aim to use next year as an assessment of the team and to give individual players time to improve.

“It is really a self-evaluation,” said Howard. “It’s a way for me to evaluate where we stand. Going back, choosing to be in the region next year or not, I just think it gives us a chance to build the numbers while we wait to get bigger, faster and stronger. Those are the things we need to do before we get into the region.”

The addition of Howard to the program has made Doherty more confident in his team.

“Last year wasn’t great, especially towards the end of the year,” Doherty said. “I expect this year to be different because we’ll be playing better matched teams and our coaches have a positive outlook on things.”

Howard credits Midtown’s rich past as one of the reasons why he took the head football coaching job. He believes starting anew lets the upcoming team play without expectations and to morph the team and season into what the players and coaches want.

“If you don’t know about Grady, Grady is one of the oldest APS schools in the system, it was birthed in the late 1800s,” Howard said. “I mean look at the campus; we have a collegiate type of campus, and I think we have everything in our favor. We just need to believe we can come here and succeed. And old-school Grady, moving into Midtown now, it is a blank canvas;we can paint this any color we want; we just have to make our mind up about ‘Who are we?’ and show the world.”