the Southerner Online • May 20, 2022 • https://thesoutherneronline.com/88658/sports/senior-schroeder-places-second-and-thrid-at-state-to-end-career/ 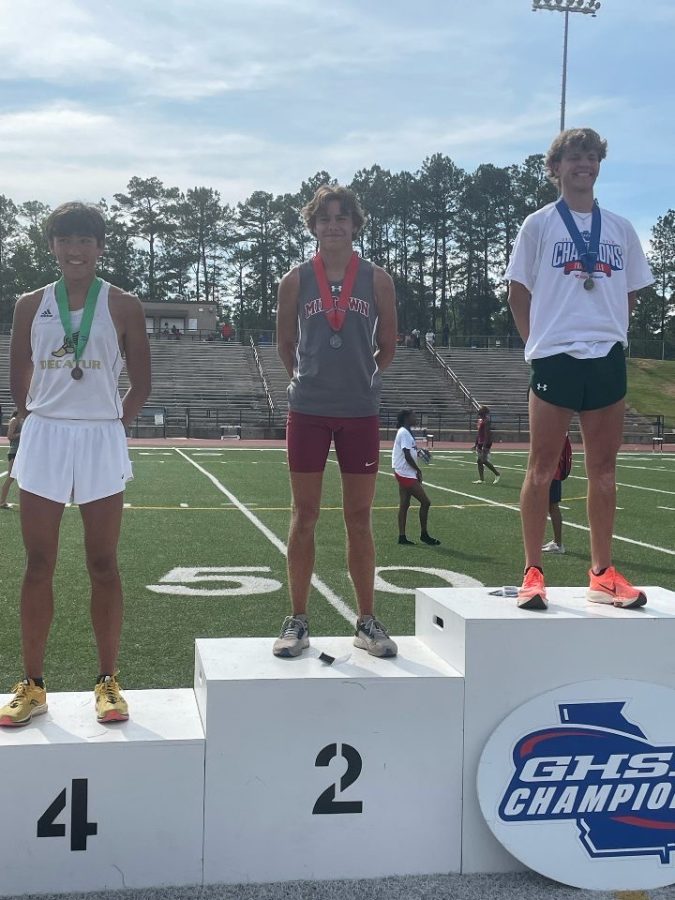 Senior Everett Schroeder stands on the podium at the State meet.

In 2004, groundbreaking research published in an issue of the journal Nature by University of Utah biologist Dennis Bramble and Harvard University anthropologist Daniel Lieberman argued that humans evolved to run. That same year, senior Everett Schroeder was born.

“Running has kind of just been what I’ve been better at sports-wise,” Schroeder said. “Growing up, I’d do the neighborhood 5k’s, and I was always alright at them; so, when I got to middle school, when there was an actual team for it with cross country, I just joined that.”

Since running the Inman Park 5k in elementary school, Schroeder’s ran competitively every year of his life, and for a school cross country and track team every year since sixth grade.

Despite his success in high school —which included being named Region Runner of the Year after sweeping the 800, 1600, 3200 and 4×800 in the Region 6-AAAAA Championships — running has not always been serious for Schroeder.

“In middle school, we just fooled around a bunch,” Schroeder said. “At cross country, we would  hide in the bushes as we were running around the school. In track, there wasn’t an actual distance coach, so we just walked around at school and had practice.”

It wasn’t until high school until Schroeder became more committed.

“I actually started to take it seriously,” Schoeder said. ”People in general were just more committed, and also coaching wise, coaches knew what they were doing, moreso. Each year I’ve gotten more committed to it. Freshman and sophomore year, I didn’t run over the summer or in the winter. I just kind of showed up to practice. But then junior and senior year, I started doing that and that’s when I started getting a lot better.”

When Schroeder got to high school, his potential was recognized immediately by former cross country coach and athletic director John Lambert, who also taught Schroeder in elementary school.

“He was exceptional and ahead of his class,” Lambert said. “He always had more endurance and more stamina than the runners his age. Even in elementary school, when we were doing the Pacer Test, he would always beat everybody else.”

Schroeder, who will be attending Duke University,  said that a key motivator during the last few years was the possibility of running at the collegiate level.

“Mostly, I thought of running in college as like a crutch kind of to just get into a better college, and I was trying to do that over the summer last year,” Schroeder said.

Things, however, did not go according to plan.

“Cross country was not the best season, and I got hurt,” Schroeder said. “Then I was just like coming off an injury. I wasn’t in great shape. I tried doing stuff to stay in shape. I was sort of like swimming and stuff, but it just wasn’t the same. So, I wasn’t like hitting fast times. And that was really the last season to have times to really talk to coaches; so, I was like, ‘Oh well,’ but then I ended up getting into a school (Duke) that I was happy with anyways.”

For coach Tony O’Kelley, who started coaching boys distance runners this year after coaching three years at Maynard Jackson, and cross country at Emory at Oxford, the two-year unit of Emory University, Schroeder’s determination is what stood out.

“As a runner, he’s gutsy,” O’Kelley said. “He has heart. He has something that as a coach you can’t teach athletes. Our goal as coaches is to get them as strong as possible and as quick as possible and help them mentally. [Schroeder] is what we consider a gutsy athlete — he has the heart when he competes; he competes at one gear, and that gear is the high gear.”

O’Kelley said the impact Shcroeder has on the team during competition and in practice is invaluable.

Schroeder’s biggest key when it comes to running at a high level is to be strong mentally.

“You have to hold yourself accountable because it’s a much more individual sport than other ones,” Schroeder says. “In others, if you lose, you could say to yourself that it was your other teammates’ fault. In track, if you do well, you see [the results], and if you don’t do well, then it’s obviously your fault, and because of that, for me, it makes it easier to push through because you want to win more.”

“I told [all my runners], the sky’s the limit,” O’Kelley said prior to the state meet. “The goal has always been that we’re going to put in work, and if you put in the work, the results will show. So, if you come to practice and you give it 100% at practice, eventually it’s going to pay off, and in the meets it has been. He came in this season and put in the work, and he destroyed his personal record.”

For Lambert, Schroeder’s success this year and his expectations for the state meet were not out of the blue.

“I expected that,” Lambert said. “I expected him to be going to state and place high in state. He, as an eighth grader, used to come up here and train with us. He’s always worked. He always had a good work ethic.”

In the end, Schroeder emphasized the importance of running and the impact running has had on him as a person.

“I definitely feel it’s helped me with my character with hard work,” Schroeder said. “And also just learning the values of what you put in, with the individual aspect of it you see the product of your work.”