the Southerner Online • May 20, 2022 • https://thesoutherneronline.com/88652/sports/girls-track-takes-six-runners-to-state/ 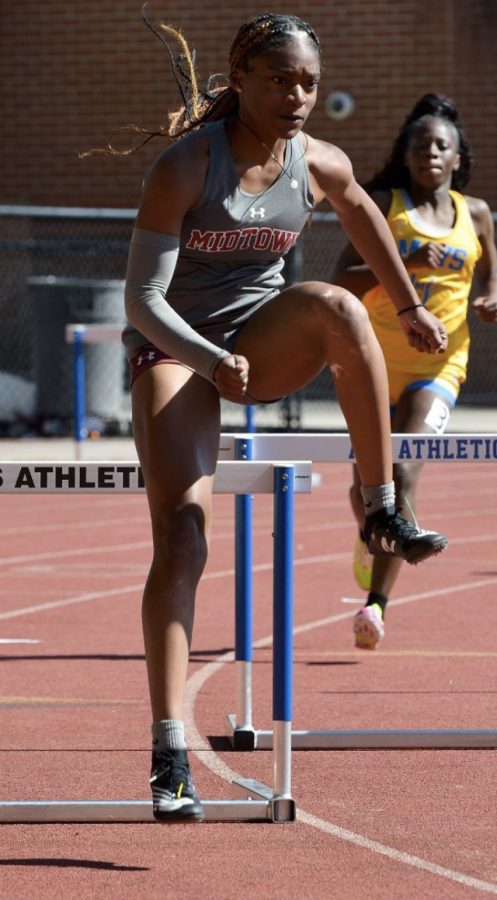 Freshman Danayja Harper competes in the Atlanta Track Classic. Harper finished second in the 300 meter hurdles in 43.10 at state and is third in the country for freshamn in this event.

The Knights girls track team competed in the State Championship meet May 12-14.

On the first day of state, Lisbon placed 15th in the high jump and Edwards placed 7th in the triple jump.

Edwards was proud to stand on the podium.

“I have loved seeing my progress,” Edwards said. “In the beginning of the season, I put a lot of pressure on myself, and I think it got to me and affected my performance. When it got towards the end of the season, that’s when I really started pushing it, and I’m proud that I was able to stand on the podium for triple jump this year because last year I didn’t do as well.”

The 4×200 relay narrowly missed the finals, placing 11th in the prelims with a time of 1:44.63, 0.15 seconds away from advancing. Not qualifying for finals in the 4×200 came as a disappointment, but the time was a new school record.

“We didn’t run a bad time,” Edwards said. “We missed the finals by like 0.1. We weren’t mad because we broke the school record three times. I am still proud of the team and breaking the school record is more of an accomplishment.”

“You work hard all season, and especially when you see how well the team is progressing, you set the bar pretty high,” Washington said. “When that doesn’t happen, it is sort of a disappointment, but more than anything else, 5A is a very competitive classification; so, I am very proud of them for not only going out and giving their best but also for their mindset afterwards to say we’re disappointed but not defeated.”

On the third day of state, Harper finished second in the 300 hurdles in 43.10. The time was a PR for Harper and is the 6th in the state. She’s ranked third in the country among freshmen.

“It felt like everything that I had done that led up to that moment was paying off and that all of the hard practices, the tears, basically the behind the scenes that nobody sees was really paying off,” Harper said. “It felt like I was exactly where I was supposed to be in that moment and that I deserved it.”

Although Harper was aiming for first place, she was proud of herself. She hopes to finish first at state next year, but also has other goals.

“Being first in the state is a really big accomplishment, but it is really about improving myself and breaking more records and just improving my track portfolio,” Harper said. “One of my biggest goals is to break the national record for the 300 hurdles for high school.”

The girls national record in the event is 38.90, set by Sydney McLaughlin, the Olympic champion and 400-meter hurdles world record holder.

Despite several girls qualifying for state, the team faced setbacks in the distance races. No distance runners qualified for state. The absence of junior Jamie Marlowe due to an injury was one reason why.

“A setback was definitely Jamie not being able to run with us,” junior Emilia Weinrobe said. “She was the core of our distance team, the top one, and not having her running with us definitely took a toll on the team.”

Washington agrees, but said he stressed the importance of continuing on to the team and running for the teammates who couldn’t.

“Track is a sport that almost invites injuries in terms of how often we’re running,” Washington said. “It causes a lot of wear and tear to the body; so, towards the end of the season, we experienced quite a few injuries, primarily Jamie Marlowe. Jamie was scheduled to run in the 4×800 meter relay, the 1600 meter run and the 3200 meter run at region, and unfortunately she couldn’t. We’re a team, and although one person may go down, that doesn’t mean that we stop.”

Weinrobe was disappointed in not qualifying for state, but optimistic for next year.

“I was a little stunned we didn’t make it to state,” Weinrobe said. “We made it last year, and it was an incredible feeling, but this year when we didn’t make it, it just kind of shocked our team, and we were very disappointed in ourselves, but we are looking forward to working even harder to make it next year.”

The Knights set several records this year. Harper attributes the team’s success to improving mentally, a theme that Washington had for the season.

“My favorite thing about track this year has been elevating myself mentally because last year I had a lot of setbacks, and it wasn’t because of the physical part, rather the mental,” Harper said. “This year has taught me to believe in myself more and keep a positive mindset no matter what happens, which has helped me a lot.”

One of Weinrobe’s favorite aspects of track is the atmosphere that surrounds the team.

“The bonds I form with my teammates are unforgettable,” Weinrobe said. “All of them are so sweet, so kind and so encouraging. The best bonds I have formed this year are with the distance team just because I train with them every day, and those girls are like my sisters.”

Harper agrees that the environment at practices and meets is very positive.

“It has been carefree,” Harper said. “There’s not too much pressure and everyone has been very supportive. We have been uplifting each other all season, and it has definitely improved our times because we’ve been more relaxed.”

Edwards was proud of her final season, and although she initially felt ready to leave, the emotions hit her at state.

“After I did my final triple jump, I literally burst into tears,” Edwards said. “I was so sad because it really hit me that it was my last year doing it. It’s mixed emotions. I’m happy I persevered, but I’m sad that it is coming to an end.”

Although the team will lose several distance runners and Edwards next year, Washington is optimistic about next season.

“I’m very excited for next season,” Washington said. “We really had some amazing new pieces join the team this year, and they are freshmen and they made significant contributions to the team. We have a really good young team, and I can’t wait to see how they develop as people and as athletes.”

Harper said she had a great experience at state and is excited to hopefully experience it again next year.

“[State] was probably one of the best track meets that I’ve been to,” Harper said. “I’ve gone to big meets before state, but we had a great experience. Our coaches took care of us. I was in a room with my teammates, and it was nothing but good vibes. Everybody was pretty sentimental about the fact that it would be the last track meet, but we made the best of it. It just felt like that’s exactly where I needed to be in that moment. Even competing, I wasn’t nervous or scared. I made a lot of memories that I won’t ever forget.”