the Southerner Online • May 20, 2022 • https://thesoutherneronline.com/88649/sports/juniors-commit-to-college-for-athletics/

Juniors commit to college for athletics 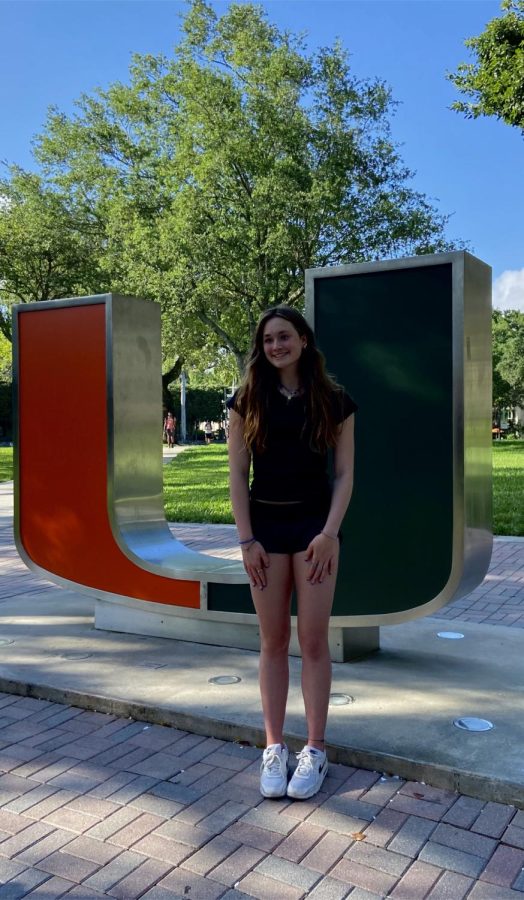 Jory Richardson smiles infront of the U at the University of Miami during her official visit.

When current seniors are deciding where they are going to college, posting their decisions on instagram, and picking their future college roommates, three junior student athletes already know where they will be attending college in two years.

University of Georgia women’s soccer commit, Hayley Chamberlain, University of Notre Dame fencing commit, Rodrigo Fernandez, and University of Miami swimming commit, Jory Richardson, are all current student athletes at Midtown. This year, these athletes have verbally committed to attend and participate in those Division I athletic programs when they start college in 2023.

Richardson began swimming as a second sport to soccer to keep busy during the summer.

“I started off doing summer league for my sport, and then realized I really liked it, and I ended up dropping soccer for it in sixth grade,” Richardson said. “My coaches always told me I had a lot of potential; so, I just had to work super hard and all of my training paid off.”

Going into her junior year, Richardson began receiving interest from colleges. From the beginning, going to college in Florida was the goal, making Miami one of her top choices.

“For me, it [the recruiting process] was kinda different because my coach is one of the assistant coaches at Georgia Tech,” Richardson said. “The school I was looking at is also in the ACC; so, it worked out really nice for me. Because my coach was really close with the head coach of Miami, it was easier for me to talk to them and get to know them better. I went on an official visit in late April, and then that’s when I knew I really liked it and decided to commit.”

The location and overall energy of the program led to Richardson’s decision.

“I knew I couldn’t go somewhere up north because I hate the cold weather and the coach and their program really just spoke to me,” Richardson said. “I feel like the people on the team matched my energy, and I feel like I really fit in there.”

In addition to the feel of the team, the training style and opportunities available made Miami unique compared to others.

“The training style and the fact that the pool is outside is really cool,” Richardson said.  “I feel like those two things are something I could not get somewhere else. They do different sorts of sets; they have beach workouts, which is very cool, and they also try to mix up the areas where we work out every week so that you are never doing the same things. They also have a really good lifting program.”

Richardson hopes to continue to grow as a swimmer, and she believes Miami gives her the best opportunity to do so.

“I really want to go to the NCAA, which is a really big meet, a national meet, that you compete in in college, and I want to make junior nationals this year,” Richardson said.

Chamberlain began playing soccer at the age 5. As she got older, she knew she wanted to play at the collegiate level.

“As I began to get better, I slowly started to realize I wanted to play with the best players,” Chamberlain said. “The best part about playing at a high level is the competitiveness it brings and the high you get from playing.”

Chamberlain tore her anterior cruciate ligament her freshman year and tore her minusicus her sophomore year. Her injuries put her behind the rest of the players on her team.

“Coming back from my injury was really hard because I hadn’t played in two years, and that was my prime time,” Chamberlain said. “I kind of had to play catch up.”

Despite the challenges Chamberlain faced because of her injuries, she will be playing for the University of Georgia’s womens soccer team in the fall of 2023. The coach and soccer environment at UGA made Chamberlain’s decision easy.

“I loved the coach. I thought he was awesome,” Chamberlain said. “I also knew that Georgia would be a great place for me because of everything I’ve heard about it. I’m excited to be able to play at the highest level and about all the friends I will make on the team.”

Fernandez began fencing at a Nellya Fencers Club summer camp, as he was going into the third grade. He soon began competing competitively.

“I started off participating in a summer camp,” Fernandez said. “Our club is pretty competitive, and you can either choose to go full out or just not, and if you don’t go full out, you are just wasting your time at the club;so, in a way, it forced me to go to a high level.”

“I wasn’t really getting any responses from good fencing colleges until after I won my first big national tournament,” Fernandez said. “After that, I got responses from Ohio State, Boston University, Notre Dame, Johns Hopkins — these colleges started talking to me, so I could start negotiating with them about what I preferred. I toured Notre Dame, and I had already seen Johns Hopkins, which I didn’t really like. I kind of just went with the better fencing team.”

“I wanted to go to Notre Dame because they are one of the best fencing colleges in the country,” Fernandez said. “The location of the college isn’t great, but the coaches are really good, and since they have a good team, you can get better because everyone there is better than you. I didn’t want to go to a college where I was the best one because then I would not be able to improve as much as I will at Notre Dame.”