the Southerner Online • May 17, 2022 • https://thesoutherneronline.com/88607/sports/boys-track-finishes-season-strong-at-state-meet/ 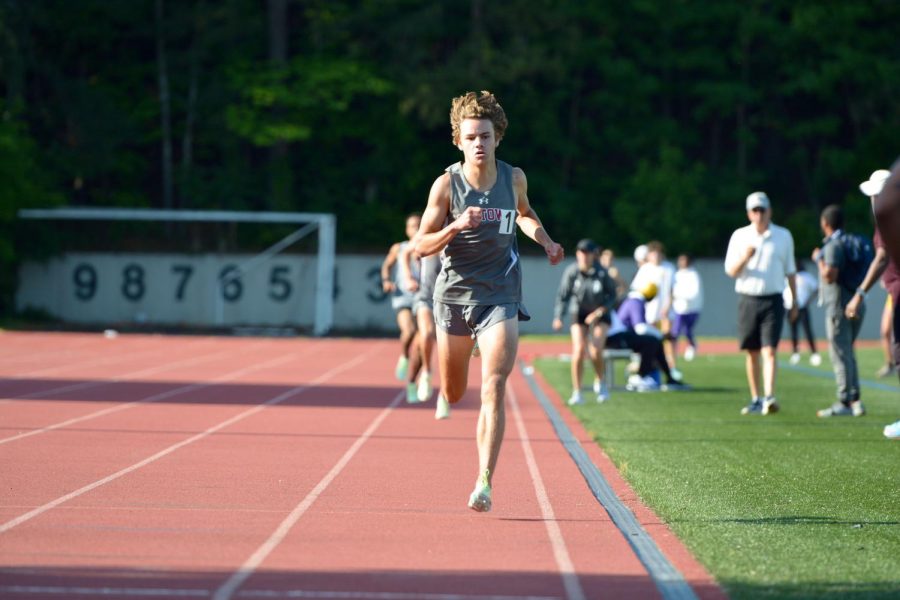 The boys track team had a strong season, placing second at the Region 6-AAAAA meet. The team also had an athlete to place in the top three in two events at the state meet.

“I was extremely proud of them because they had come a long way,” coach Delbert Ellerton said of the team’s region finish. “Even though we didn’t win with points, we had a big win in that track meet because finally, they see what their potential is and what they can accomplish.”

After a 2021 season with fewer than 20 athletes, the boys spent the year trying to rebound.

“We only had 17-18 or so kids for the entire year last year,” Ellerton said. “This is one of those reset types of years where we had to bring back the fact that we’re supposed to be successful.”

“I felt that I didn’t do as good as I could’ve, but I’m glad that I actually came in first,” Taylor said. “I was a little disappointed with my time.”

Junior Kyron Parker who was in the lead in the 300 hurdles, along with his teammate Taylor, was on pace to run a top four time in Class 5A, but fell after landing across the last hurdle. However, he still managed to finish fourth and qualify for the sectional, which is the state qualifying meet.

“I felt defeated because I knew I wouldn’t PR (set a personal record),” Parker said.

Schroder, who was named Region Runner of The Year after accounting for 32.5 points, won region in the 800 in 1:56.76. Junior Devin Tabourn finished second behind Schroeder in 1:57.92.

“I went into region knowing that I was in shape to perform,” Tabourn said. “I decided to go out there and run fast. I was ready to go and perform.”

“I was pretty confident that I could win,” Schroeder said. “I was pretty happy. We have a pretty good region, and we went into it hoping to at least come out of it with a trophy, and we did.”

“We came out of the region meet with the number eight time in all of Class 5A,” Ellerton said of the 4×400. “I’m very pleased with how they performed.”

The 4×400 is always the last event in the track meet, which makes it highly anticipated and an exciting race all around.

“Our last race really was setting the tone for the meet,” Schroeder said. “That was a really exciting race. A lot of us got pumped for it, especially coach Ellerton got really excited for that. Our team started coming together a lot; so, it’s good to see that.”

“I finally broke through and jumped 11, which was a new personal record for me,” Scarano said.

Ellerton anticipated a good state performance and said that the team is back to where it used to be.

“Outside of [the 2017] team, this is probably the strongest team since that team,” Ellerton said. “Even though we finished third last year (in the region), it didn’t feel like one of our teams [with the small participation numbers]. This team out there at that meet felt like one of our teams.”