the Southerner Online • May 12, 2022 • https://thesoutherneronline.com/88552/lifestyle/junior-lieberman-flourishes-in-theater-and-sports/

Junior Lieberman shines on the field and in the spotlight 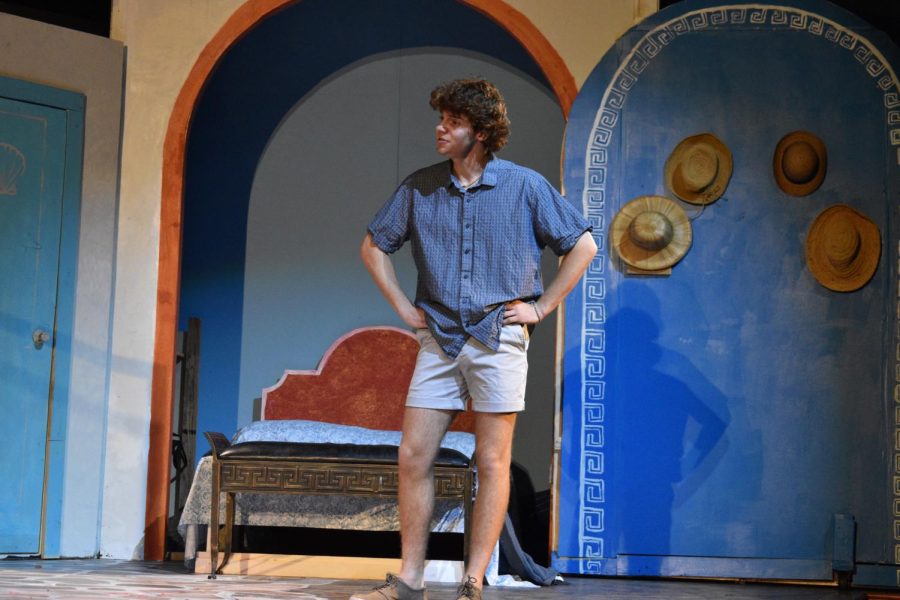 The bright lights of the stage and the red dust of a baseball field are two places that require very different skills. Junior Spencer Lieberman participates in the Midtown Theater Program and is on the Varsity Baseball team. Juggling school, theater, baseball and everything else in between is no easy task, but Lieberman has been successful in balancing it all.

Baseball and Theater are both very time consuming activities. Lieberman has dedicated much of his time to both of these activities while still maintaining good grades, having a vivid social life and working at Brooklyn Bagel and Deli.

“I had to learn how to manage my time and find a balance for everything I had going on,” Lieberman said. “My parents and friends were always there for me, and I feel very lucky that I was able to have so much support.”

One of Lieberman’s fellow actors Brady Stroppel is a senior and has worked closely with Lieberman this year in the theater program. This year, the pair have been in the productions “Sister Act” and “Mamma Mia.”

“Spencer is a really good friend, and he is also an inspiration to be honest,” Stroppel said. “The way that Spencer can juggle school, baseball and theater, which are all really big time commitments, just amazes me and I really look up to him.”

Lieberman first gained interest in the theater program when he was in middle school, and attended many of the productions put on by the Midtown drama department.

“I got interested in theater because I went to the plays that were put on when I was in middle school, and I was really interested in them,” Lieberman said. “I joined the musical theater class my freshman year, and I did tech for one of the fall shows. Now, I’m a junior and I have actually been able to be in the shows.”

Taking on a sport and a lead role in the theater program was no easy task, but Lieberman was determined to do both to the best of his ability.

“There definitely were points where it was overwhelming, especially the week of ‘Mamma Mia,’” Lieberman said. “So that week, and then the week before were two of the most stressful weeks of my life because not only did I have the show, but I had to balance schoolwork, baseball and other various things.”

“Spencer on the field is an incredible teammate and source of energy, Constantinides said. “This season his defensive performance was outstanding and it played a critical part in the teams success.”

Lieberman was tasked this year with large speaking roles, something he had not yet had experience with.

“I kinda became the guy who did the accents in theater,” Lieberman said. “In ‘Sister Act’ I spoke Spanish, and in ‘Mamma Mia’ I was British. The most challenging part of ‘Mamma Mia’ was probably having to speak in a British accent for the whole show.”

Lieberman has also had success with Midtown’s baseball team.

“My baseball team just made the playoffs, and the experience riding the bus back home with my teammates, blasting music and just having a good time, was a nice experience to have, especially since there have been a lot of rough patches this year,” Lieberman said. “With theater, it was great to finish out the year and do Mamma Mia with some of my favorite people.”

Jordan Tarver, Lieberman’s baseball coach, has seen the commitment and hard work that he has put into his multiple extracurricular activities, and believes it adds to Spencer’s personality.

“Spencer brings a level of confidence to the program that most don’t at the varsity level of baseball,” Tarver said. “I think theater definitely has a major role in this, being that he’s having to perform and remember lines in front of many people.”

Lieberman has been playing baseball since the first grade and plays for the Midtown team and a travel team. When Lieberman chose to pursue musicals, his coaches and teammates were all supportive of him.

“My coach was really, really supportive of me and he actually came to see one of the shows, which made me happy,” Lieberman said. “My teammates were always supportive of me. Of course they all had questions and would crack a joke on occasion, but I never really got judgment from them, which was nice.”

Scheduling conflicts arise for Lieberman, but he does his best to stay on top of his schedule, and coordinate everything as well as he can.

“For ‘Mamma Mia’ and baseball, I would figure out what the schedule was the week prior to practices and rehearsals and then I would pick out the days I was going to miss ‘Mamma Mia’ rehearsal or baseball practices and games,” Lieberman said.

Spencer’s coach has seen how well Spencer has been able to handle both responsibilities, and how mature he has been through it all.

“Spencer has done a great job managing both baseball and theater,” Tarver said. “On the days he had shows or rehearsals to shows and knew he’d miss practice, Spencer took the initiative to come out to the field early enough to get baseball practice in and head back to the school to be at the rehearsals.”

Lieberman’s parents have seen him go from a ninth-grader in a theater class to one of the lead roles in the spring play. They believe the primary reason for this is his dedication to the drama program.

“The fact that he tried out for a role in the theater productions, got the roles and worked hard, and then to see him truly in his element on stage has been wonderful,” Liz Lieberman said. “There is so much talent on the stage, we just feel lucky that Spencer gets to surround himself with people who are talented and hardworking, and to see him learn and grow his stage presence has been amazing.”

Lieberman has set an example for many of his friends, who think that Lieberman is the perfect example of someone following their dreams.

“I consider Spencer one of my closest friends, and he is one of the nicest, most genuine, non-judgmental people I have ever met,” Stroppel said. “Spencer has taught me that there is no cap on the passions that you can have, and if you love it, then you should do it.”