the Southerner Online • May 10, 2022 • https://thesoutherneronline.com/88548/news/principals-and-administrators-discuss-cluster-at-state-of-the-cluster-meeting/

Principals and administrators discuss cluster at State of the Cluster meeting 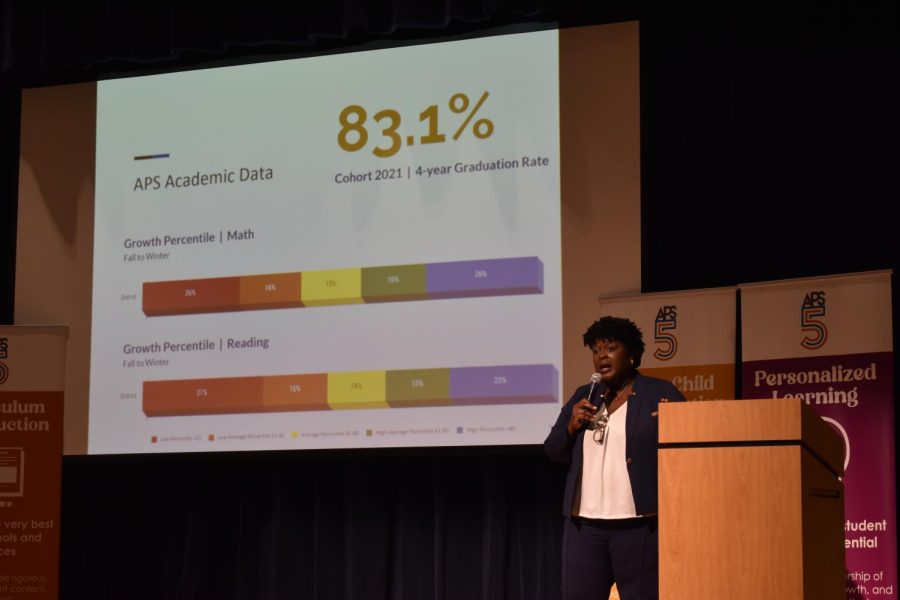 Principals and administrators reveal success at the State of the Cluster meeting.

The Midtown Cluster held its State of the Cluster meeting on April 21 at Howard Middle School. At the meeting, APS and school-level administrators gave the community updates on the schools in the Midtown cluster.

“Our state of the cluster meetings are grounded in the opportunity to highlight our schools and the great things that are happening,” Superintendent Dr. Lisa Herring said

One recurring theme throughout the event was the APS five, which are five measurable methods the district uses to guide progress. The five methods are data, curriculum and instruction, whole child and intervention, personalized learning and signature programming. Signature programming was highlighted specifically in the meeting, due to the cluster’s transition to a new signature theme.

“Prior to becoming a STEM signature program, we were college and career,” Harness said. “The beauty of college and career, [is that] there were a lot of standards similar to STEM. We chose to capitalize on it and to create a pretty amazing STEM website. We documented and were able to provide evidence in every STEM standard which got us to a place where we were very well prepared when we had to present for our STEM certification.”

Another common topic was performance on the MAP screeners that APS gave to students this year.

“Utilizing MAP measures of academic progress for the universal screener to identify how our students have been performing and will continue to give us the opportunity to have a sense of our students’ current performance level and to monitor growth,” Herring said. “We implemented it as a formative assessment three times a year at the beginning of the year, middle of the year and end of the year.”

Mary Lin Elementary reported success in the achievement scores on the test.

“We are currently number one in the district for achievement, and both math and reading,” Mary Lin Principal Sharyn Briscoe said. “Something that we’re really proud of and but what’s more important, well not more important, but equally important to us is that our students grow.”

Springdale Park also highlighted their scores in both growth and achievement on the MAP tests.

“We had some pretty amazing achievement scores; number two overall in the district,” Harness said. “Mary Lin did edge us out but our bread and butter is always about meeting kids where they are. Our growth was number one throughout the district in both areas combined. We were number one in math overall and number two in reading overall.”

Morningside Elementary performed highly in reading but struggled in math.

“We can see we need to do more work in math, we see that our growth scores are not where we want them to be,” Morningside Principal Audrey Sofianos said. “That is the work that we’re digging into.”

“One of the things that we are most proud of is the fact that … Hope Hill is performing neck and neck with all of our sister schools, and that has taken a long time to achieve,” Wheeler said.

Another focus for the cluster was increasing attendance, which was high across the cluster.

“We’ve done so much with by implementing a care team and just making sure that we are looking at all of the students who need to recieve any type of assistance, making sure that they’re not falling through those gaps and… just making sure that our kids are here at school,” Joy Antone, Interim Principal at Howard School, said. “Our daily average attendance was right at 94 [or] 95 percent.”

“We have an incredible support emotional support staff, we have two grad coaches, four counselors, a full-time social worker, a career coach, a 504 coordinator, who’s dealing with 240 504 plans herself, a bilingual community specialist this year, [and] Chris 180, which is our therapy program that’s on-site three days, and we’ll have five days next year,” Dr. Bockman said. Our special thing, though, is we also have a therapy dog this year: Ike. You may have seen pictures of Ike. Ike kind of wanders around the school and really offers a lot of support this year.”

Dr. Herring credited the recent success in the Midtown cluster to the teachers and staff of the schools.

“Our core business is teaching and … our end client falls between the ages of four to nineteen,” Dr. Herring said. “Those of us who have signed up to do this work, I believe, bring a passion and a commitment to get it right for all of our scholars and for the adults who serve them.”