the Southerner Online • May 10, 2022 • https://thesoutherneronline.com/88511/lifestyle/ae/48-hour-film-project-spurs-creativity-entices-students/ 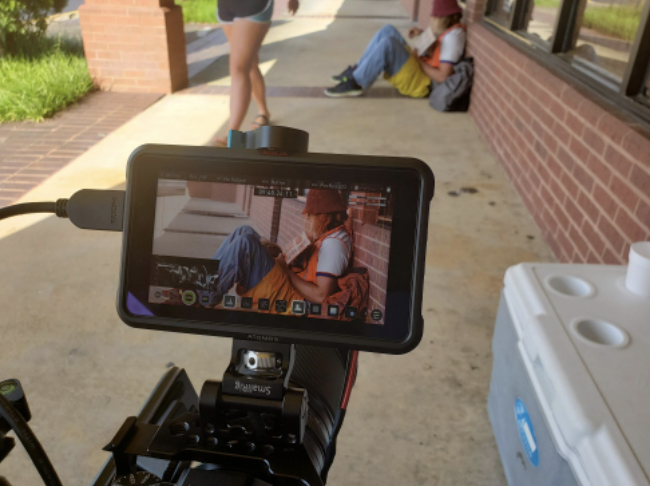 A team films their movie for the 48 hour film project. The films created premiere the weekend of May 14.

Imagine 48 hours: packed full of writing, filming and editing, all to have your movie played on the big screen. The “48 Hour Film Competition” contains little to no sleep, but many high school students are up for the challenge.

21 years ago in Washington, D.C., a man named Mark Rupert and a group of his friends got together and decided to see who could make the best film in 48 hours. They split the competition into five teams, made the films, previewed them at a theater and then judged them themselves to determine a winner. After this, the idea caught on and spread throughout the world.

“One of the teams who participated moved down to Atlanta, so they were like: ‘Hey, let’s try it in Atlanta,’” Producer of Atlanta’s 48 Hour Film Project, Dino Moore, said. “So, they came down and they started. This coming year will be Atlanta’s 20th anniversary.”

Before the 48 hours begin, the teams gather and each select a random genre. This can vary from a silent film to a period piece. In addition, every team must incorporate the same line of dialogue, prop and character.

After the 48 hours begin, the teams rush to come up with an original and enticing idea for a four to seven minute film.

“It’s a frantic weekend of no sleep, but it’s fun,” Moore said. “And you’ll see people from all walks of life, from teenagers with iPhones to professional filmmakers.”

Every year, Moore is looking to encourage high school students to participate.

“The future of filmmaking is 14-15 year olds with iPhones,” Moore said. “This is because they don’t care about the equipment; they care about the stories, and they’re dead focused on sharing stories that only they can tell.”

Freshman Lannea Kimmons is interested in pursuing a career in filmmaking and would love to try out the 48 Hour Film Project.

“It’s such a cool idea,” Kimmons said. “I think it will show what it’s like to work with a big group of people along with working with such a time limit.”

Moore is inspired by young filmmakers’ passion and is looking to mentor them by passing on his knowledge.

“I would love to hook them up with a mentor who could show them how to better make their films more technically sound,” Moore said.

“I looked at the 48 Hour Film Project and thought, ‘This looks really perfect,’” Dreiling said. “It was just one weekend. I asked some students if they were interested, and 2013 was the first year we did it.”

That first year they won the award for best costumes in Atlanta. After this, Dreiling and Midtown students competed five more times.

“It’s always a good experience,” Dreiling said. “It’s really exhausting, but every time we’ve done it, it’s been so much fun,”

This year, the film project will run from May 13 -15. Dreiling is planning on participating with Midtown students who are passionate in filmmaking.

“I’m gonna put it out there and see who wants to do it,” Dreiling said. “I hope a whole bunch of people can, because it’s more fun with as many people as we can get. There will be auditions and signups for whoever wants to do it.”

The 48 Hour Film project is an enriching experience that allows students to improve upon and show their filmmaking skills. Though it may be intimidating to compete against professional filmmakers, it is a perfect opportunity for students to show their creativity.

“It’s funny, you’ll see people with these super huge cinematic cameras and all this lighting and sound equipment,” Moore said, “And you’ll see a team with iPhones beat these other guys with the bigger equipment, because they focus on telling a good story, which is what this whole thing is all about.”