the Southerner Online • May 6, 2022 • https://thesoutherneronline.com/88492/sports/girls-soccer-ends-historic-playoffs-with-loss-to-chamblee/ 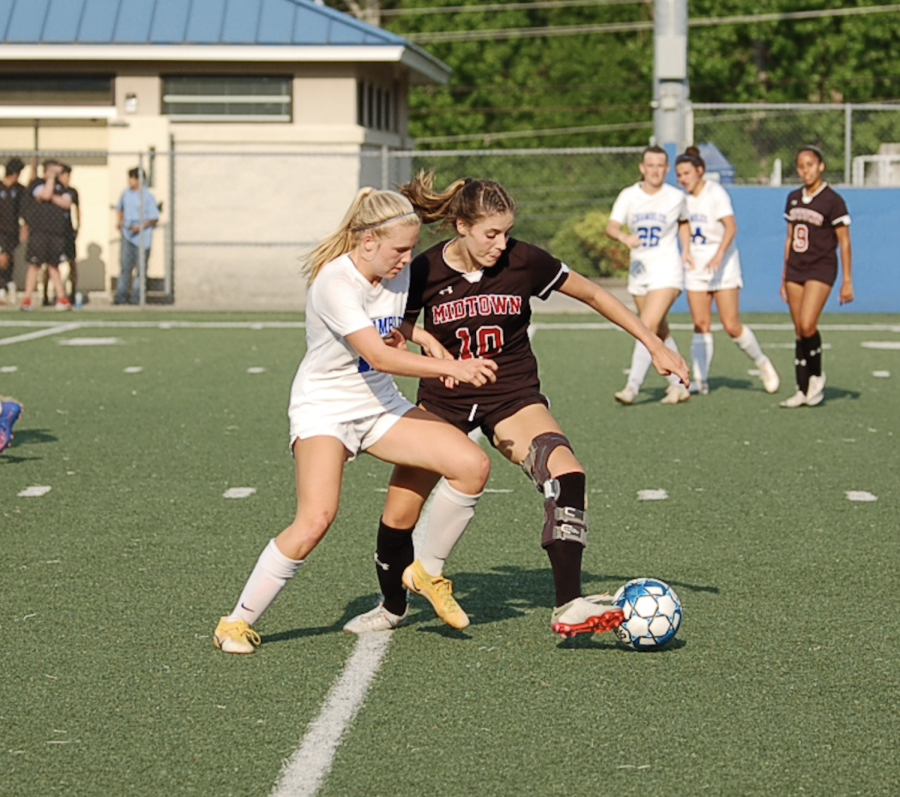 Junior Haley Chamberlain shields the ball from a defender in the state championship game against Chamblee. The Knights had a historic playoff run but fell short of the title with an 8-1 defeat.

The girls soccer team made their first state championship in program history, and rounded out their record breaking season with a runner-up finish. The team lost by a score of 8-1 to Chamblee on May 5.

The team knew Chamblee would be a tough opponent after the Bulldogs beat Blessed Trinity, historically one of the state’s best programs in the final four to advance to play the Knights.

“We knew that they [Chamblee] play at an elite level,” head coach Blair Barksdale said. “The two girls they had up top, both sophomores, they really run stuff. It’s like playing against LeBron [James] and Steph [Curry], you know, you can’t really do much to stop them.”

The forwards for Chamblee put the Knights down early, scoring less than a minute into the game. The Bulldogs rounded out the first ten minutes of the game with three more goals, leaving the Knights stunned. From there, however, the Knights stepped up on defense and kept the score at 4-0 for the remainder of the first half.

A positive attitude was required to keep the energy up to maintain that score, according to sophomore midfielder Carolyn Harty.

“We stayed positive and we had some good play, but we just had some trouble finishing,” Harty said. “In the end I think they had a lot more support in the crowd and they just had three really strong players that kind of took us down.”

The Knights started off strong in the second half with junior striker Shay Bowman scoring their first and only goal in the 65th minute. Despite the Knight’s added momentum, the Bulldogs shot back with their fifth goal less than a minute later. Throughout the rest of the second half the Bulldogs put three more shots in the back of the net, and the Knights only had one shot on goal from junior forward Hayley Chamberlain, which was stopped by Chamblee’s goalie.

The lack of shots paired with the strong offensive presence from Chamblee, including two players with hat tricks, caused the Knights to falter, and ended the game down seven goals, losing 8-1.

“It was a little rough, but I still had fun,” Chamberlain said. “We started off rough but we still played well. We needed to be ready in those first ten minutes and not have been pretty much asleep, but that was a really good team still.”

Bowman, the Knight’s sole scorer, was proud of the effort her team put forth despite the outcome.

“It’s tough to go down four goals in the first 10 minutes,” Bowman said. “That really just kind of put the nail in the coffin to be honest, but I’m proud that everyone picked their heads up and fought to get that goal, and I’m proud we’re here; it’s really awesome to even be here. Regardless of the score, win or lose, we knew it was gonna be a big accomplishment. So we’re just happy to have made it.”

Barksdale was also proud of the effort her athletes displayed and impressed by the leadership her top players showed, Bowman included.

“I think the leaders of our team played at 110 percent, and they really showed leadership during and after the game,” Barksdale said. “They clearly love their school and they love their team. I’m just incredibly proud of us because we got here, and we made history.”