the Southerner Online • May 3, 2022 • https://thesoutherneronline.com/88465/sports/girls-golf-makes-history-advances-to-state/ 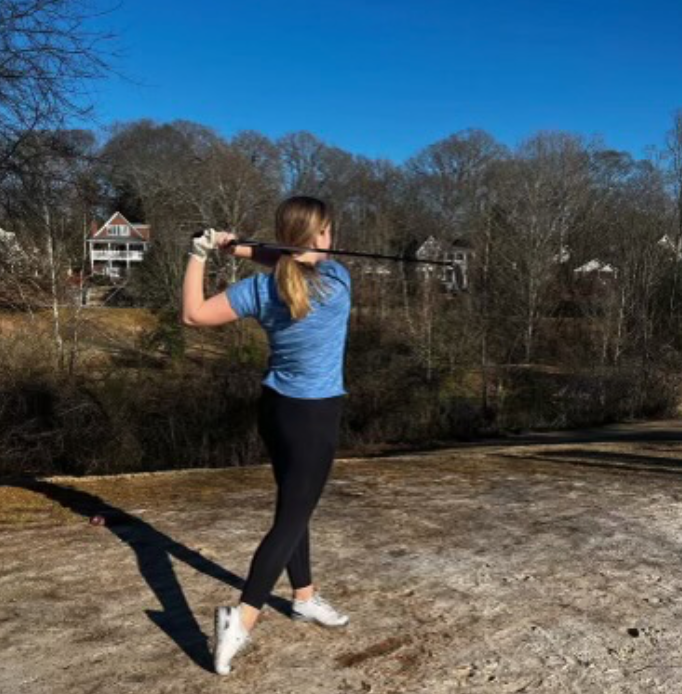 The girls golf team continued their promising season after playing at Fields Ferry Golf Course in Calhoun, Georgia, on April 21 placing second to advance to the state 36-hole tournament on May 16-17.

In 2020, the first girls golf team in Grady history was created, only for their season to be canceled a month later.

“The first year I was at Grady, there were no girls on the team so in 2020, which was the start of the pandemic, we had our first girls team but it got canceled within about a month, so last year was our first full season with a girls team,” coach David Johnson said.

Johnson has been playing golf for over 45 years, and coached at Howard, formally Inman Middle School, for four years before coming to Midtown for his fourth year.

“I’ve seen a lot of the players develop as both players and people so that’s been fun,” Johnson said.

As a long-time golf player, Johnson hopes to be an inspiration for younger players getting involved in the sport.

“I’ve been playing for a long time so obviously I enjoy the game and in my other life I’m a golf course designer,” Johnson said. “I have a lot of ties with the sport and I’ve always enjoyed playing the game and wanted to make it available and inspire young people to play the game.”

Last year, the girls made it to the first round of playoffs, but senior Zephy Schroeder expects to go further this season.

“I think both the boys and the girls teams hope to make it to sectionals again this year and possibly advance further to state,” Schroeder said. “There’s a lot of new freshman talent on both teams which has helped.”

Young talent has been a key to success for the girls this year. Freshman Julia Williams is one of the newest additions to this year’s roster.

“Williams especially is kind of a natural athlete,” Johnson said. “She’s kind of challenging some seniors this year for the top spot on the team so it’s been really pushing some people.”

Williams has an optimistic outlook on her first year playing on a high school varsity team.

“Since I’ve gotten to know the girls on the team, they’ve made practice so much fun,” Williams said. “Whenever I get in my head or frustrated about a shot, they’re always there to cheer me up and make me laugh.”

Because there were no seniors on the team last year, this year’s captains look to be good leaders for the other girls on the team.

“It’s good to have the leadership role because last year there were no seniors, so it’s nice to have senior captains this year to be role models and set the expectations for the rest of the team,” Schroeder said.

Williams acknowledges the help upperclassmen have provided through her first year.

“At first it was a little awkward because most of our varsity team are upperclassmen, but I’ve gotten to know them and they’re amazing people,” Williams said.

Two tournaments in the season were canceled, so the girls started their season off 1-0. In their match against Decatur, the scores of Julia Williams and senior and co-captain Lindsay Ruhl were used.

“I’m really happy that they used my score but it wasn’t just mine,” Williams said. “Lindsay and I play really well together and she contributed just as much as I did to the winning score.”

As the season continues to progress, Midtown has come out with big wins against New Manchester and Villa Rica, as well as one win against Landmark Christain. Although they were defeated by Drew Charter and Landmark in a second game, Williams is excited to see how the rest of the season will play out.

“I’m really excited about this season because this is the first time I’ve ever really been on a team for this sport,” Williams said. “I’m excited to play more tournaments and get closer with the other girls and players on the teams.”

The girls hope to continue to win their games and improve their outcome from last year in playoffs, making their mark on Midtown sports.

“Last year we made it to sectionals which we were happy with, but we expect to place higher, if not advance,” Schroeder said. “The talent has improved and it’s a game that takes a lot of time and practice, so there’s a year worth of improvement.”