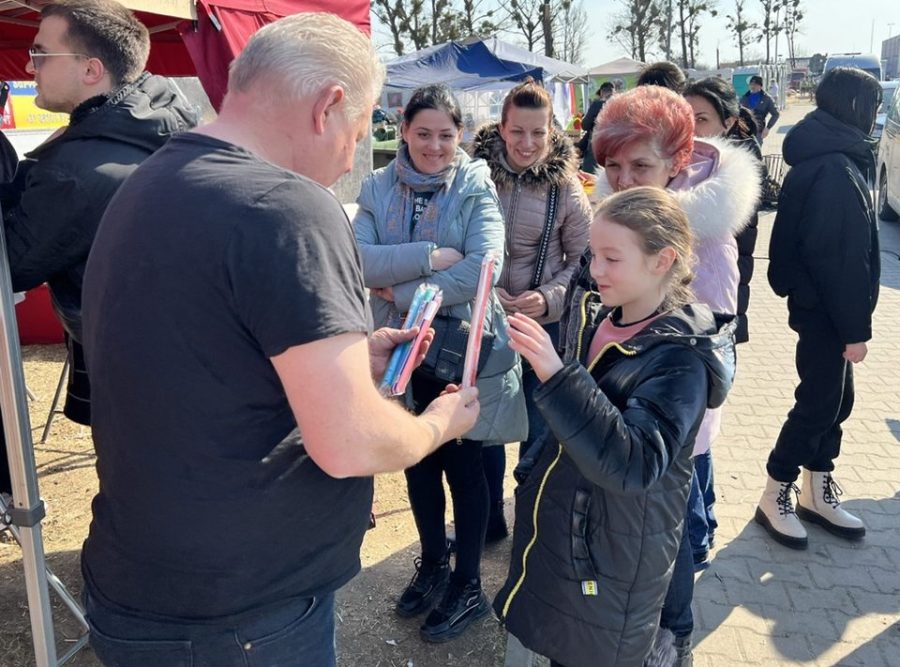 Tom Jachman, a Midtown parent, was stationed as a Fox News photographer in Ukraine, where he took the above image of refugees at a train system.

Tom Jachman is a Midtown parent who was stationed as a photographer for Fox News in Ukraine. Below is a piece he wrote to share what some of what he saw during his assignment in March.

On March 14, I noticed the wide-eyed gaze of the mostly women, senior citizens and children immediately upon arriving near the train platforms. What would you grab if you were in a hurry and could only hand-carry these items for a journey that might not have an end date? Some food, water, documents and a phone. Your kids take their stuffed toys and dogs on leashes. One boy was smiling with a bugged-eyed cat in a backpack while holding a hamster in a cage. Food still brings smiles to their faces. Kids are excited to receive a treat of candy or hot chocolate. People hold each other tightly. Adults smoke outside with coffee and look at maps inside before obtaining a bus or train ticket.

On March 15, we visited the border crossing at Medyka. Happy faces step out of Ukraine and then thoughts of home creep in. When can I go back? Will my home be standing? Is my mom okay? The dogs walking across look jittery and skittish. The World Central Food Kitchen and dozens of other organizations are there with tables lined with bowls of hot soup and drinks, bread, pizza, fresh fruit, candy and sandwiches. Tables are laid out with toiletries and other necessities. There is a strong smell of campfires for warmth. Volunteers push grocery carts filled with belongings. Some Ukrainians are being pushed across the border in wheelchairs. People are lined up to board buses to anywhere. There are smiles and live music and balloons. It’s both serious and festive at the same time.

On March 17, some lucky refugees have family or friends waiting at the crossing. They have tearful reunions and grandma enjoys a sandwich roll while the uncle’s van is loaded with five children. A three-year-old jumps up and down in glee as he plays with a toy car he was given. When I see many refugees lined up to board buses, I think back to all the refugee stories. We will face mass migration. I read this crisis is the largest and quickest movement of people since the Second World War. On March 21, trucks are lined along a border highway in Poland by the hundreds and hundreds waiting to cross into Belarus and some onto Russia. We drive alongside the convoy taking pictures and shooting video for miles and miles. Some of the drivers tell us they are not part of the war, they just want to deliver their potatoes and go home to their families. They also said the Polish government has deliberately slowed cross-border traffic. We saw that what was usually three inspection lanes open there was only one.