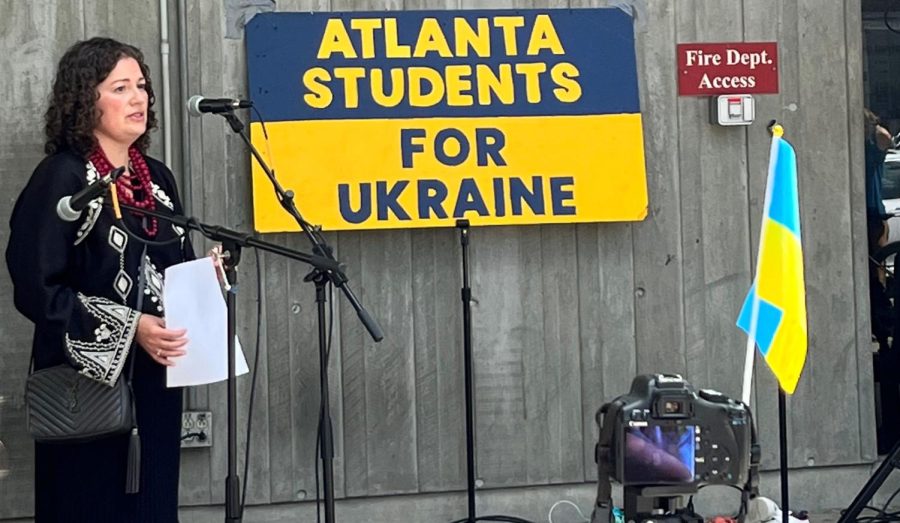 Ania Solovei is from Kyiv and now lives in the U.S. but most of her family still lives in Ukraine. “When the war first started, I watched it live on CNN. I had to call my mom in Kyiv who was peacefully asleep and tell her that the war had started. It was a terrible day.”

Two missiles struck a train station in Kramatorsk, Ukraine killing more than 50 people and wounding many more. Two weeks later, on April 24, a group of Midtown students organized a tribute event at the Midtown MARTA train station to show support and solidarity with the Ukrainian people.

Freshman Sierra Pape and other students who organized under the name “Atlanta Students for Ukraine” collected donations of shoes to display outside the MARTA station to illustrate the number of casualties caused by the attack. “You see children’s shoes as five children lost their lives that day. You see business loafers as men and women were working to evacuate,” Pape said. “Imagine a living body in every one of these pairs of shoes that felt the impact of those devastating missiles. Instantly, lives were lost.”

Benjamin Merva’s family are Slovakian immigrants. Merva heard about the event through a Facebook group he is a member of. He attend the event with a sign he made reading “ATL Stands with Ukraine”.

“I think that Atlanta as a beacon of civil rights should stand up for human rights, should stand up against the atrocities we are seeing and I think the shoe drive being done, and us bringing visibility to this issue is pretty important,” Merva said.

The event began with Olena Kovban playing “Prelude by Myaskov” on the bandura, a traditional Ukrainian folk instrument. Afterward, the Midtown Orchestra Quartet played the State Anthem of Ukraine. Junior Chloe Walker played in the quartet.

“We are just using our talent to show our support,” Walker said. “I want people to understand that just because you are a kid or you are a student doesn’t mean you can’t stand up for what you believe in … but also that regardless of what you are doing, as long as you are supporting the cause, that’s what matters.”

The music was followed by a moment of silence and non-denominational invocation led by Chaplain Olga Westfall of Atlanta Veterans Administration Medical Center.

“It’s a remembering of the victim that were killed during the strike, also remembering the victims of the thousands of Ukrainians who were killed during this war,” Westfall said. “Also there are more people who are wounded, those that are grieving, they are in pain – physical and emotional. It’s a lot. It’s a time of grief and also a time of memory.”

This event was held on April 24 which was Easter Sunday for the many Ukrainians that are part of the Orthodox Church. Atlanta Students for Ukraine had coordinated with various speakers from international organizations, including Razom for Ukraine and CARE International to come and speak at the event. Lena Urmey is from Odessa Ukraine and moved to the United States in 2000. She now works and lives in the United States and is a volunteer for Razom for Ukraine. The rest of her family are still living in Odessa.

“Yesterday, early morning, I started exchanging silly pictures with my friends of dyed eggs and there was an inkling of unspoken hope that people on the other side who also celebrate Easter today will be somehow respectful of one of the greatest holidays that’s about forgiving and being with family,” Urmey said. “Five minutes into that exchange, I found out that my hometown of Odessa was bombed – twice.”

Sophomore class president Vadym Nahornyi, who moved from Ukraine to the U.S. when he was in 6th grade, also spoke at the event.

“Every summer, I would travel to Ukraine to be with my family and friends. I remember my trips … plenty of people, parks that spanned acres, but now it has been turned into a crime scene,” Nahornyi said.

Nahornyi said he talked to a close family friend who described her journey of escaping to Poland. She had only a few hours to pack one suitcase for herself and her three children before traveling along mine-filled roads to the train station in Kyiv where they were able to safely get to Poland. Once in Poland, they faced the reality of the refugee crisis that has manifested. She and her three children all had to sleep on one mat in an athletic complex without adequate clothes or thermal supplies, and she had to stand in three-hour lines if she wanted to receive any food and water for her family. After a week of enduring these conditions, she found a way to get to Italy.

“Natasha’s story is the same as thousands of other Ukrainian families trying to flee to safety from Ukraine,” Nahornyi said.

Nahornyi is running a humanitarian aid drive at Midtown as part of his effort “to make sure experiences like Natasha’s don’t happen.” The drive will be collecting blankets, clothes, hygiene supplies, mats, etc. which will be donated to support the need in Ukraine.

Jonathan Arogeti works as the Humanitarian Communications Coordinator at CARE USA. Arogeti has recently returned from the Polish border where he has been aiding in the refugee crisis there. Arogeti said he met a teacher who not only had the responsibility of her family, but also that of her 35 students, all of which were being displaced. During the past months of conflict, she has been trying to stay in touch with them over Zoom.

“She said her biggest dream is she hopes to return and to have all 35 of her students and her have a big barbeque outside with sausages once the conflict is over,” Arogeti said.

CARE and its partners are currently working to support Ukrainian teachers who have relocated to other countries including Poland and Romania, to connect them with Ukrainian students who are also refugees to provide a sense of normalcy in their education after having to flee to a foreign country.

Councilmember Alex Wan, District 6 representative on the Atlanta City Council, spoke about the significance of the event being organized by youth and the importance of Atlanta standing in solidarity with the people of Ukraine.

“As we gather here today to share this important, but very very somber event, I appreciate the community coming together to express and share our devastation about the atrocities of war,” Wan said. “This is a great showing for our solidarity from all the way here in Atlanta back to the people of Ukraine … I think it just underscores our solidarity with our young people for their activism, for their engagement, and for their awareness of things that are happening around the world.”

Jeff Cramer, the Midtown cross country coach, and his wife, Ann Cramer, helped Atlanta Students Advocating for Ukraine in executing the event after Pape came to them with the idea. He agrees it is important to support the youth in their endeavors to bring attention, and said the committee of students who organized the event is one of the “best-organized group [he’s] ever seen.”

“The word around town is that students are really doing something,” Cramer said.

Freshman Charlotte Keenan organized the event alongside Pape and the rest of the committee from Atlanta Students for Ukraine.

“I was really moved to want to help,” Keenan said. “We used connections that we had with people and people know people so we were able to reach out … All the speakers were so motivational and inspiring … I just [people] get more awareness and more educated now about what’s going on because, obviously, you hear about it, but after seeing the shoes, I think a lot of people are able to see these are real people.”

Linda McClanahan, Keenan’s grandmother, came to the event to show her support for both her granddaughter and Ukraine.

“I am just so incredibly proud of [Charlotte] for being a part of this and bringing awareness, it’s just so important,” McClanahan said. “I hope the visual of these shoes brings home the real tragedy — the loss of people, the loss of lives. It’s agonizing.”

Olga Markova is from Kramatorsk, Ukraine. She moved to the United States in 2014 after war started in her city. She still has friends and relatives living in Ukraine. One friend who helped her mother evacuate was killed in the Kramatorsk train station attack. She heard about the event through a friend and felt they had to be there.

“A week before the explosion, my mom was in the very same train station leaving,” Markova said. “The week after, Roman, he died by helping other people like he helped my mom the week before. It’s very heartbreaking, and it’s hard … It’s not just numbers, it’s not just people, it’s not just the city of Kramatorsk; it’s life for me.”

She said being at the event “in a good way, breaks my heart [beacause] it gives me messages we are not forgotten.

“When you are suffering; you want people to know – you want community. The world to know there is suffering, horrible things, injustice that’s happening right now,” Markova said. “For me, when I see those kids at such a young age already understanding what is evil and they can raise their voices agains that evil, it means a lot, it means there is hope.”

Markova’s daughter, Emily Markov, is from Ukraine and moved to America with her family when she was 3 and a half.

“My cousin and my grandma, they got to go to Poland ,and they have a place to stay, so far,” Markov said. “I’m not sure about all of them because most of my family is there since I used to live there. At least, I’m pretty sure all of them are alive.”

Markov said the event meant a lot to her.

“It means that at least I know that people care,” Markov said. “I feel like I can’t do really anything to help them. It’s really sad. My family is going through war.”