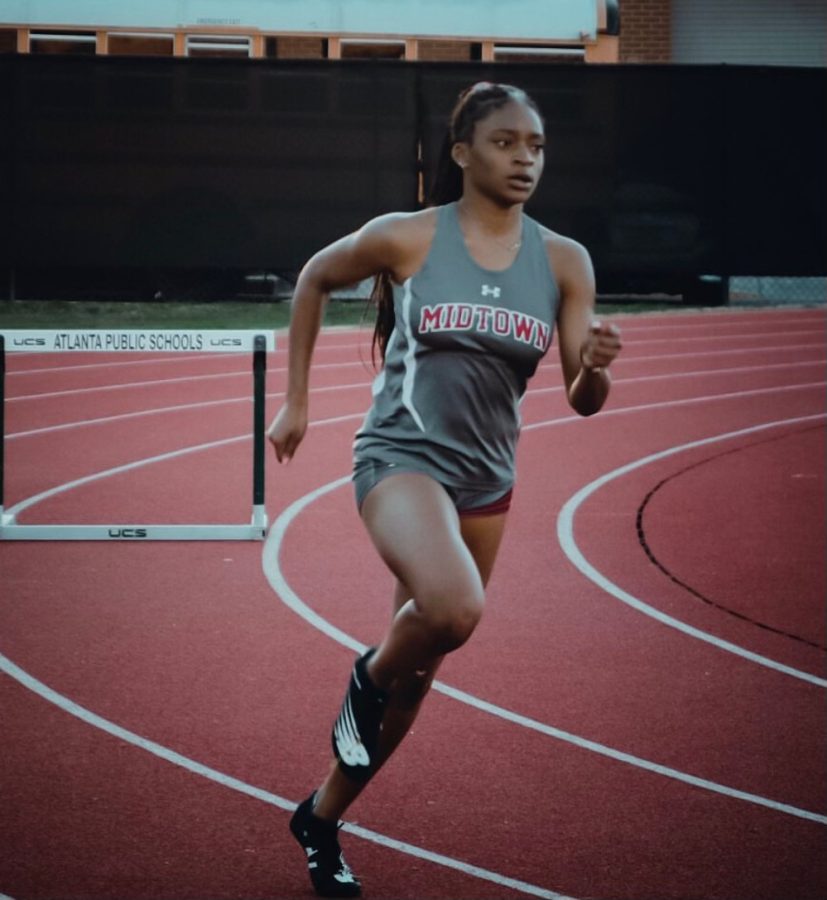 Harper runs the 300m hurdles during a track meet at Midtown.

One leg in front of the other. Body shaking. Heart racing. The finish line creeping closer. 15 years old and 165th in the nation for the 300 meter hurdles.

“She can run anything you put her in,” girls track coach Josh Washington said. “She’s very adaptable and can adjust to any event.”

“It was very unexpected,” Harper said. “It reassured me that I am capable of doing great things…it made me realize how much people believe in me.”

“I’m always competitive,” Harper said. “Everybody in my family is athletic. So, it’s just in me.”

In August, Harper qualified for the 2021 Junior Olympics.

“You compete with the highest runners in the nation,” Harper said. “It’s a week-long meet, and you compete each day.”

Harper’s high school season has been rewarding. She ranked third in Class 5A in the 300 hurdles.

“Everything that I’ve been doing this past year is finally paying off,” Harper said. “It’s reminding me why I sacrificed a lot during the summer and during the school year.”

Harper admits that pressure she faces from coaches and friends is intense, but not as difficult as the pressure she puts on herself.

“I hold myself to a lot of high expectations because I know how capable I am to being successful in track,” Harper said. “When I don’t do what I expect myself to do, I don’t take it lightly.”

Even as a freshman, Harper has become a role model for the track team.

“They see how she warms up,” Washington said. “They see her approach to just the sport in general, and it’s not so much her athletic ability that they look up to; it’s just her mindset.”

Harper is known for her positive attitude towards the sport and to her teammates.

“She always has something wonderful to say about her teammates and she inspires everybody and livens everyone up,” Washington said. “I appreciate that from a head coaching perspective.”

“We are in the same age group; so, we will always be battling on the track,” Holmes said. “Despite our friendship, she pushes me to be great, even if I am her competition.”

Harper said she runs track because she finds a sense of solitude in running and competing.

“It clears my mind,” Harper said. “When I run I don’t think about anything at all, it’s therapeutic for me.”

Harper has set high expectations for herself to end this season.
“I want to get top 10 in the state,” Harper said. “I have a good shot. I just have to stay consistent and keep a good mental perspective.”