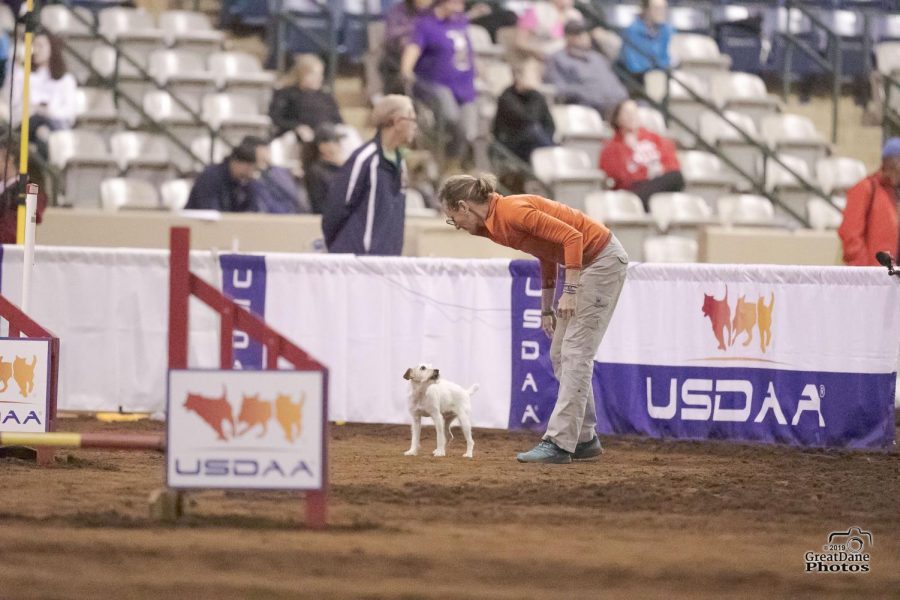 Nunnink at USDAA Nationals in Murfreesboro, Tenn., where she placed third.

Imagine training your dog to compete in an international competition while teaching engineering classes. That is the life of one of Midtown’s engineering teachers, Melissa Nunnink.

Nunnink went to the Cynosport World Games International Invitation where Nunnink’s dog, Toast, placed third in the dog agility competition. Toast has been in the top 10 for the last five years with the United States Dog Agility Association (USDAA). Toast passed away in July 2020, Nunnink now trains a new dog, Whisk.

“It’s Toast’s work,” Nunnink said. “My relationship with Toast is what got us really far. I didn’t think we could do as well as we did. The people around me, the other people on the podium — all they do is train. They don’t have a job, and that’s their profession, so for me to be up there, my little Toast going to the big city was amazing.”

Nunnink believes her ability to train dogs goes hand in hand with teaching students. She said the teaching and training of dogs and humans are similar in many ways. She teaches Toast by using games.

“The same challenges I face with teaching, are the same challenges that everyone faces when trying to change behavior,” Nunnink said. “Training dogs helps me realize that kids all learn in different ways. I know there is a limit to the words we can hear, so it gives me a whole new perspective.”

From an early age, Nunnink embraced her natural ability for teaching.

“I think it’s something that is a part of her DNA,” Melissa’s father, Leo Nunnink said. “Many years ago she was an instructor, and during one of her classes we got to sit in, I was just really surprised how good she was at what she was doing. I didn’t know she had a natural affinity for teaching.”

Students like freshman Anders Hart says Nunnink provides a lot of energy and gets to know each student individually, similar to the way she interacts with dogs, supporting them through passion and energy.

“Ms. Nunnink is different from most other teachers I’ve had, because she is very enthusiastic about what she does, and she always helps the students who need it,” Hart said. “She personalizes [teaching] for each student. She walks through anything that a specific student needs.”

Nunnink has high standards and expectations when it comes to any activities she participates in, ranging from teaching to training her dog at an international level. Unlike others, she doesn’t partake in common activities.

“I don’t have to drive to the gym to workout, I cut that time out of my day, and I bike instead of driving,” Nunnink said. “I don’t have kids; so, it’s easier for me. A lot of other people have a lot of pulling them in different directions, but I don’t.”

Nunnink’s dedication to all of her extracurricular activities is something unique. She spends seven to eight hours a week helping the Technology Student Association (TSA) program at Midtown by organizing events and making sure every participant is at the right place at the right time.

“There are few people that I know that are as intellectual, well-read, articulate and devoted as Ms. Nunnink, and those are a few of the attributes that make her special,” Melissa Hatcher, a friend of Nunnink said. “She goes above and beyond to anything she commits to and never leaves a job undone.”

Engineering teacher, Tonia Schofield, the other co-sponsor of Midtown’s TSA program, uses Nunnink as a role model, inspired by her commitment and determined mindset.

“She makes the best out of everything,” Schofield said. “She has learned to take and master things. Ms. Nunnink helps activate me, — she adds to the technical aspect of TSA and adds new ideas. She makes things run smoothly, she fills the gaps that need to be filled in, she’s been excellent — she’s been the driving force.”

Leo Nunnink admires her ability to teach dogs and students while continuing to take care of herself, as well as others.

“I think it’s amazing from my standpoint because there are things she has taught those dogs to do that I didn’t even know a dog could do,” Leo Nunnink said. “She is very capable of taking care of herself and helping others along the way.”

Nunnink’s dog Toast passed away in July of 2020, and Nunnink lost all of her statistics in her competitions. Through it all, Nunnink persevered and started training her new dog Whisk, whom she has high hopes for.

“My new dog Whisk is going to the regionals in Florida this year,” Nunnink said. “Whisk will be an international competitor, or that’s what I’m planning.”