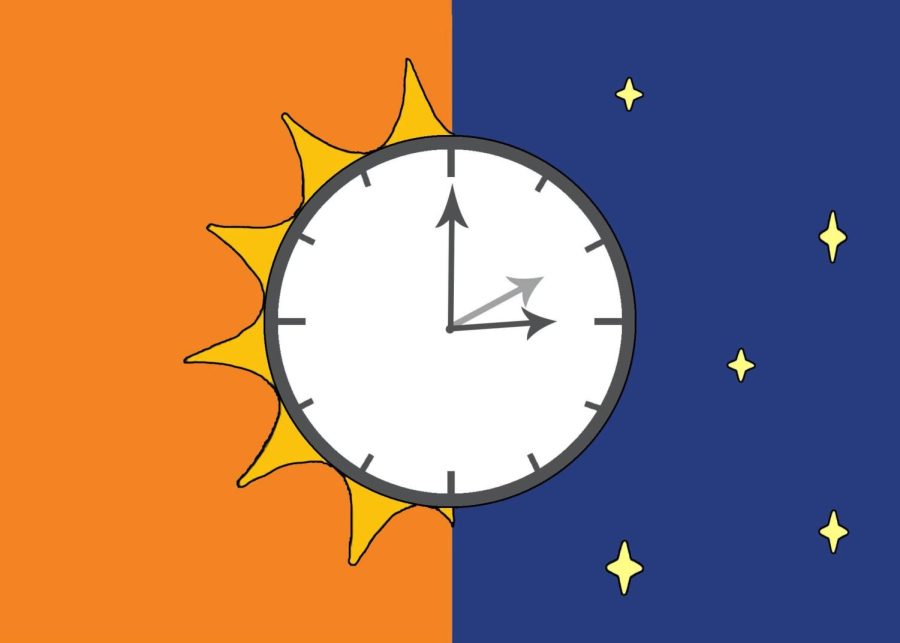 The senate voted unanimously to make daylight savings permanent. This means that Americans would no longer have to turn their clocks forwards and backward seasonally.

The U.S. Senate voted unanimously in March to make daylight saving time permanent as of 2023. The bill will now move to the House of Representatives.

This act, also known as the Sunshine Protection Act, was introduced in 2018 by Florida Senator Marco Rubio. It was created to eliminate the changing of clocks and make full daylight saving time permanent, instead of only eight months of the year. Despite many misconceptions, Rubio’s Sunshine Protection Act doesn’t modify or change the time zones or amount of hours of sunlight in a day.

Despite other perspectives of this legislation being passed, Cobb’s environmental perspective of the situation leads her to believe that this will be more detrimental to the environment.

“We’re talking about waking up in the cold dark morning versus waking up when we could have a little bit more prayer of sunlight earlier that would start warming in the day,” Cobb said. “If you were synced with that you’d have visibly lower heating demands.”

“You have to wake up in the dark and you lose about an hour or so of sleep and everyone takes around a week or so of adjustment; so, I understand the frustration and I feel it in my personal life,” Cobb said. “I would favor rather the permanent anchor to be in the fall to spring mode rather than the daylight saving mode.”

Cobb said that parents, cyclists and walkers like herself could experience larger safety problems with this potential change.

“I think there is a bigger safety issue involved,” Cobb said. “I am someone who doesn’t bike in the dark because it is much more unsafe. We already have to make sure our children are at school in pitch black for most of the year and if you were to extend that an hour later, now you’re talking about people who need to bike or walk to school or work, which is a much larger part of the population that’s going to be impacted.”

Because a reduction in pedestrians and bikers could increase carbon emissions being put into the atmosphere from alternate modes of transportation, Cobb explains that this change means many people would have to make a choice of whether to protect the planet or protect themselves.

“People will be more apt to go out and enjoy and spend money in the later afternoons and early evenings which extends the end of the day beyond work,” Cobb said. “For those of us who are looking at this from other perspectives including safety and greenhouse gasses, I see negatives there.”

Others believe that a steady schedule will be more beneficial to sleeping habits and an overall healthier schedule for the body to become accustomed to.

“My understanding of the data when it comes to changing our clocks periodically throughout the year is that it is harmful to the public to tamper with the times we are expected to be performing at work, or school,” engineering, drafting and design teacher Melissa Nunnink said. “The best thing we can do for each other is to stop moving the clocks.”

According to the Wall Street Journal, the disruptive sleeping rhythm during daylight saving time was linked with increased risks of metabolic and cardiovascular disorders. Nunnink argues that human bodies aren’t equipped for unnatural change from the natural night and day created by the sun.

“If you artificially create a situation by moving a clock back or forward an hour, you are interfering with the ability to function at our peaks,” Nunnink said. “This is not a healthy thing to continue because we are equipped with an internal clock that is connected to the cycle of light and day that the sun creates for us.”

“I am all in favor of the legislation because I find time change incredibly depressing,” parent Ashley Brightwell. “It would allow for me to be outside longer because it would still be light longer when I get home from work and allow us to do more things in the evenings.”

Some students are also satisfied with the new legislation.

“I definitely prefer the changing schedule,” freshman Leo Rose said. “I’ll know what time it is without having to guess. If one day it’s really bright and the next it’s really dark I won’t wake up on time.”

If this legislation were to be passed, longer dark mornings would transpire leaving the sunlight hours for the later afternoon permanently.

“I think you’ll see more people out and about, more people at the park, and more people walking to restaurants,” Brightwell said.