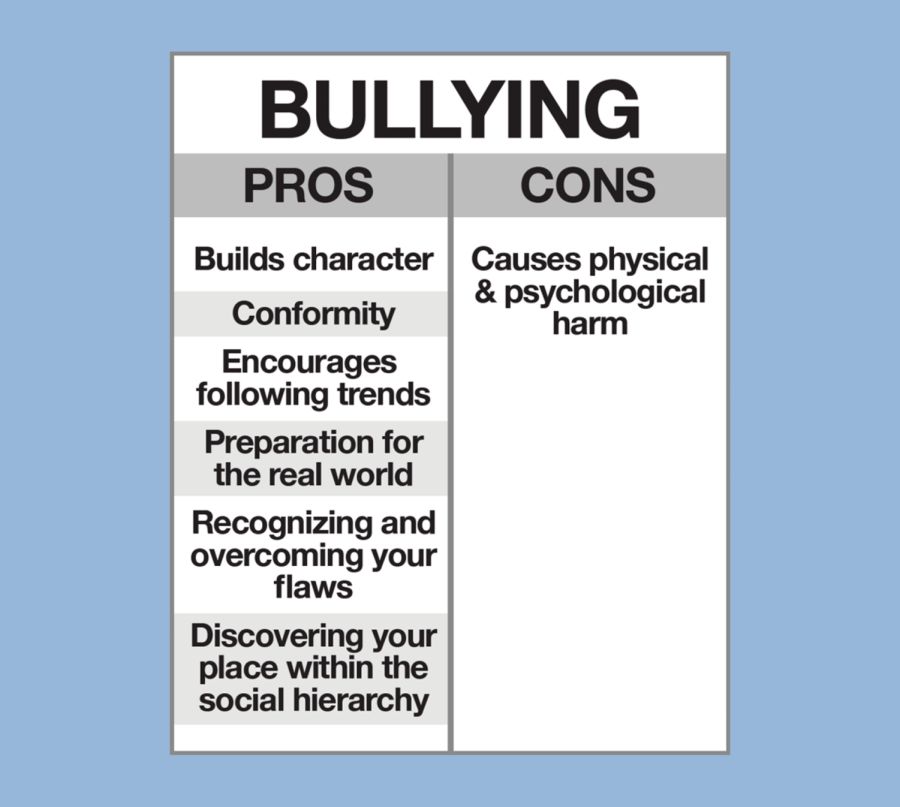 Bullying remains a controversial topic as students, parents, and teachers weigh the pros and cons.

Midtown is finally experiencing a new wave of respectable, normal students as a result of bullying, specifically stemming from upperclassmen.

Although this coming of age process has recently become more discreet, bullying and peer pressure is still rampant among students. Junior Stacey Greene encountered her own experience with becoming normal.

“When I was a freshman, I literally knew my Hogwarts house,” Greene said. “Now, I wear Lululemon and have about 1,000 Instagram followers. Honestly, I’m glad I was bullied because it was really eye-opening.”

Some students recognize their abnormalities and develop necessary insecurities as a result of bullying. Senior Harvey Lee found ways around showing his face during the COVID-19 pandemic.

“I was bullied a lot for my acne before the pandemic,” Lee said. “Accutane didn’t even work, so the mask mandate saved my life in more ways than one. I’m going to wear a mask for the rest of my high school career, then maybe I’ll take a gap year.”

This trend of character development tends to start around freshman year. Many upperclassmen recall times before their transformation when they still had some confidence left.

“I only wear earth tones now, I really don’t mind blending in,” Greene said. “At some point, between freshman and sophomore year, I started wearing mascara to school every day. I look pretty dead without it, at least on the outside.”

Sophomore Anais Hart is “still transitioning out of the sweet, bubbly girl her parents used to love.”

“Bullying has been a wonderful experience for me,” Hart said. “I’m still going through that transition, but hopefully soon I won’t be able to go to school without spending an hour on my makeup.”

While some students develop their personalities or appearances as a result of bullying, senior Janet White experienced a shift in her music taste.

“I listened to Taylor Swift two years ago, but some girls cyberbullied me into being a Mitski fan,” White said. “Now, those same girls have Folklore lyrics as their Instagram captions. I love Taylor Swift, but I can’t listen to her without feeling a sense of shame anymore.”

White thinks that girls used to compete to be different, but now they strive to be like other girls at school.

“It honestly speaks volumes about misogyny because girls are made fun of either way,” White said.

Freshman Sam Nelson and his classmates are waiting for their turn to transition into normal people.

“Freshmen are scared,” Nelson said. “We know what’s coming; it’s inevitable. This time next year, the boys will all be parting their hair down the middle.”

Fashion teacher Kelly Howard has noticed her students’ designs becoming less unique and diverse. She thinks this phenomenon is caused by bullying.

“I’m seeing my students draw black leggings on their fashion models,” Howard said. “Is this who we are? I think some of the kids are getting stared down in the hallway when they wear clothes outside of the ordinary. Obviously, they’re not being physically harmed, but one look can say everything.”

Howard supports mental development but encourages her students to express themselves through their clothes and physical appearances.

“Mentally, I want them to be normal, but that doesn’t mean they have to stop wearing platform shoes or fun tights,” Howard said. “I do not support bullying during high school. It should happen in college instead.”

“Everyone has to get normal at some point,” Powell said. “No matter when you think bullying should happen to someone, we can all agree that it is necessary. I think it’s better late than never.”