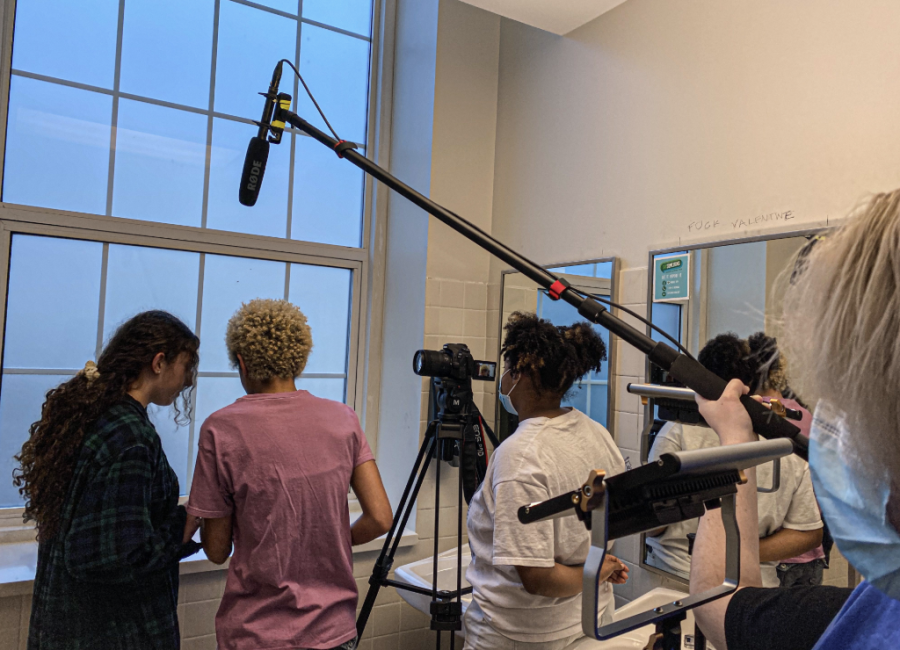 Midtown kicks off their first day of filming as they start production of a new spring short film “The Perfect Life." “We haven’t done a movie since 2018 so most of the people have not done this before,” theater teacher and film director, Jake Dreiling, said. “There were only a couple of people who were actually involved in the last one we did. It’s just brand new.”

After a four-year hiatus from film production at Midtown, students are shooting a new spring film: “The Perfect Life.”

The film features a student named Claire, played by senior Leah Boeson, who earns a scholarship for swimming. Her plans are derailed, however, once the character ends up pregnant by her boyfriend, Ethan, played by sophomore Emmett McNulty. The two have their own futures to think of but now, they also have a pregnancy to consider.

Some students are invested in participating in the tech aspect of the film production, while others are more focused on acting. Their combined interests in broadening their knowledge in the film industry and interest in the plot of “The Perfect Life,” itself help influence students’ choice to participate in the film.

“My reason for doing the film is I’d never been a part of film production before,” senior Lily Roman, script supervisor, said. “I really like the concept of the film in general. I thought it was a really interesting premise and wanted to be involved.”

This will be McNulty’s first time acting in a film. His work in the theater program was concentrated in technical work before, operating equipment such as a boom microphone. He saw the spring film as an opportunity to try acting.

“I thought it would be a good opportunity to act in a film,” McNulty said. “I’d never done it before, turns out, it could be a lot of fun.”

The film focuses on exhibiting artistic angles and perspectives. Underwater shots and sound manipulation, such as a water splash turning into a heartbeat, all work to convey the inventive technique of the film.

“We are doing more of an avant-garde kinda thing with this film,” theater teacher and film director, Jake Dreiling, said. “We are doing something that is not straightforward. We’re trying to do some very artistic, abstract choices for the filming, which we didn’t do the last time. We tried a few [films such as Midtown’s 2018 film, “Partner”], but it was not the main theme throughout. We’re trying to make this straightforward story, but with an abstract take on it.”

Students believe having access to film and film experiences in a city where the industry is expanding is important.

“I think it’s important just to know what it’s like to act, and I think it’s a great opportunity, especially in Georgia,” McNulty said. “This is like Hollywood 2.0. It’s the easiest place to start filming a movie, and I think it would be really fun to get to know that part of Georgia and to maybe be in a film one day.”

Some taking part in the film feel having film experience in Georgia will open pathways career-wise. The experience in high school of exposure to film could create a greater accessibility for students’ lives after high school.

“You could literally walk out of high school with [film] experience and get on a set, and therefore, be employed,” Dreiling said. “It does not take a college degree to go and be in the film industry. It’s so easy to do that and so accessible to people in Atlanta since we are such a hub now. We felt like it was important to bring that experience to as many people as possible in a high school setting.”

Senior Alaya Foote is the cinematographer and also helped write the script for “The Perfect Life.” She also sees creating films at school as an important way to expose interested students in the industry.

“I’d say it’s [getting exposed to making films in high school] very impactful and important because it’s an art form, and it’s basically the married version of our reality,” Foote said. “It’ll help us see things in a different way;it helps us get a different perspective, and you know, it’s also just entertaining; so, you get a new way to entertain people.”