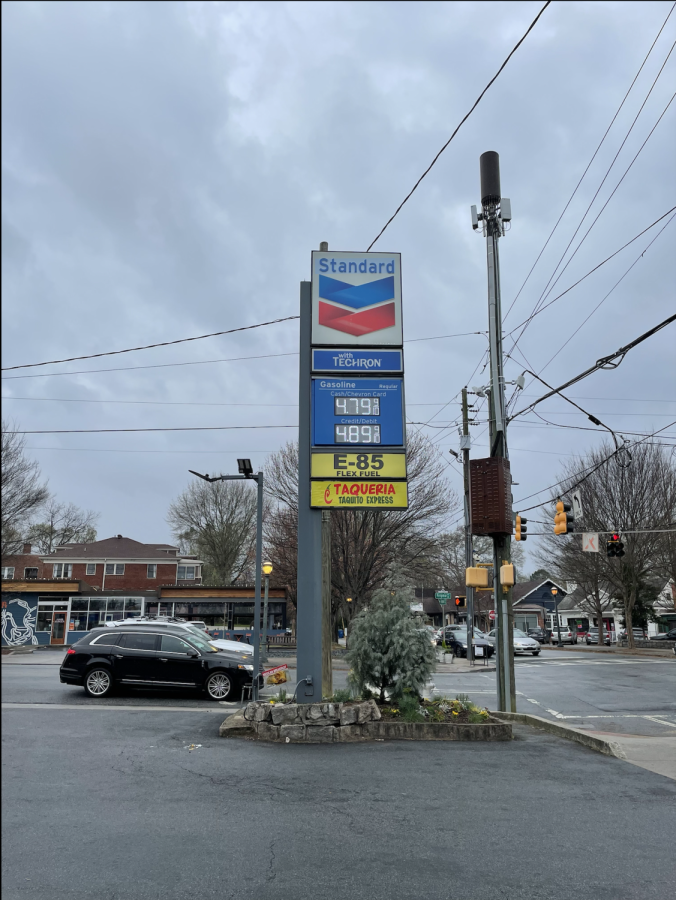 PRICE PROBLEMS: As worldwide inflation causes sky-rocketing prices, members of the Midtown community feel the effects both at the cash register and gas pump.

High inflation nationwide is hitting close to home in the Midtown community.

While the United States saw a 7% increase in prices, Atlanta’s local economy saw inflation reach 9.8% in December 2021. The rise in prices is a direct reflection of the increase in production costs, especially for items like raw materials and wages. Local business owner and Midtown parent Erik Lewitt owns a construction company in which he said saw an increase in the cost for resources this past year.

“Last year, lumber, concrete and steel went up for a lot of reasons other than just natural inflation,” Lewitt said. “A lot of it was from shortages, or people weren’t working at the port; so, we couldn’t get the products from the port to the stores, and therefore, everything got more expensive. There could have been a manufacturing plant that closed because of Covid; so, therefore, they shut down, and then there’s scarcity, and then they can raise prices.”

Lewitt has not yet increased his construction costs for his architecture business but could in the future if prices continue rising.

“Our cost of work hasn’t increased,” Lewitt said. “Once the labor starts to go up, our costs will go up, but that’s further in the future. All the food prices, labor prices, and then our prices will go up. It’s probably coming; it just hasn’t hit us yet.” Parent Glen Whitley has noticed other businesses around the community are forced to adapt to the rising inflation by increasing their prices. “Various consumer prices, like food, gas, I have noticed, are higher and/or less discounted,” Whitley said. “Gas has gone up for sure. A few months ago they were going down, and it looked like they were headed in that direction, but now they have gone back up.”

“It affects everyone to some degree or another,” Cowan said. “More money spent on necessities, like groceries, is less disposable income for other things that may still have value. Many people are already living on the edge and
making ends meet, and when you push prices even higher, it makes it harder to strike that balance and make sure you’re coming out on top at the end of the month.” Even as the prices for food, energy, housing and
gas increase across the metro Atlanta area, residents might not see a rise in their salaries. This could reduce purchasing power and the ability to afford items,
according to Cowan.

“We are seeing that for most consumer goods, between 2020-2021, we saw an average increase of 7% in prices over time,” Cowan said. “Prices are going up faster than incomes right now, which really means that at the end of the day, the average person can’t buy as much stuff that they could have one year ago.”

Inflation impacts those on low or fixed incomes the most.

“In terms of finding ways to deal with it, everyone can find their own way to get through it,” Cowan said. “It’s a matter of prioritizing what is most important to you in terms of purchasing and keeping an eye on your budget and not letting old spending habits continue if it’s no longer affordable for you to do so.”

Although the country and the local community are seeing an increase in inflation, Whitley said he is confident the problem in the economy will resolve with time. = “I think that in general, the market corrects itself enough
through the actions of companies and businesses, so I have confidence it will get reined in at some point,” Whitley said.