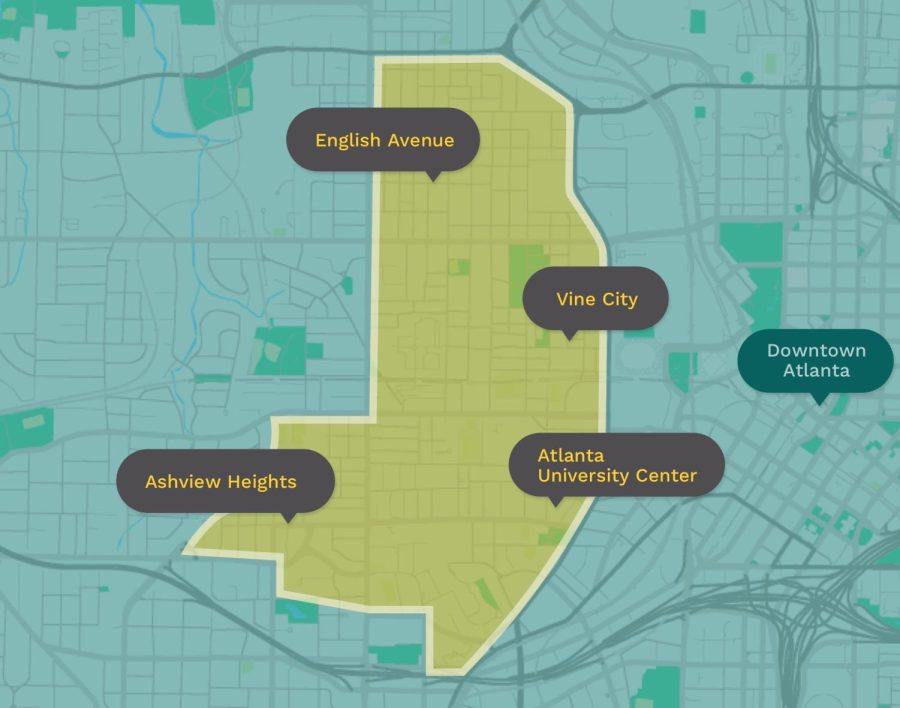 English Avenue, Vine City, Ashview Heights and the Atlanta University Center are in need of the most attention from organizations such as the EPA and the Westside Future Fund due to lead contamination.

In May of 2021, residents found slag, a by-product of steel production, on Atlanta’s English Avenue.

This discovery was evidence of lead, a powerful neurotoxin that can have harmful effects on children’s development. Since then, efforts have been made to revive the neighborhood.

“On the surface, Atlanta’s English Avenue is a historic neighborhood with high concentrations of unemployment and child poverty,” Lee Harrop, Vice President of Real Estate Development at Westside Future Fund said. “However, a greater issue is found within the soil.”

The Westside Future Fund is a nonprofit organization whose vision is to help the Westside neighborhoods revitalize and develop into a community. Once high levels of lead were identified in English Avenue, the federal Environmental Protection Agency, alongside the Westside Fund,

began to investigate a large section of the neighborhood. The EPA is requiring the cleanup of more than 2,000 properties in the area.

“We first clear out the trees on the property then strip two feet of soil off the site,” Harrop said. “We take that soil off to a Subtitle D landfill in North Georgia and bring back clean soil. There’s a plastic fabric we put down before we place clean dirt on top, that way there is an indication for future homeowners when they start digging gardens they know what to get tested.”

The initial dumping of lead in the English Avenue area has been connected to socio-economic differences and has contributed to the area’s prolonged underdevelopment. Economically, the neighborhood has suffered from a lack of investments and homeownership.

“From an economic development standpoint, opportunities on the Westside for people to sell properties and mobility centers is scarce,” Harrop said. “Although the properties we clean are vacant, you can see the impact that lead has had on community development.”

The Atlantic Steel Company, now Atlantic Station, began construction on its steel production in 1901. By-products of the factory have been dumped in neighborhoods like English Avenue since then Harrop said. The steel mill was nearly closed in the mid-1970s but remained nominally operational to avoid the costs it would have required to remediate the soil contamination present after years of operation.

“As Atlantic Station was developing land for property development, they were backfilling with whatever they had available, which a lot of times included whatever waste product from Atlantic Steel,” Harrop said. “The effects of littering were not yet understood. One hundred years later we are redeveloping and seeing the impact that this contamination has had on the Westside.” Unlike plastic or water pollution, lead contamination is difficult to remove. Although it appears to be far under the soil, the chemicals can still have an impact on the community.

“The lead is typically some number of feet underground; so, it’s unlikely that there’s lead at surface level,” John Ahmnan, CEO of the Westside Future Fund, said. “Let’s say that a child dug a garden and put it underground and didn’t raise a raised bed, that could become a concern.” The presence of lead can impact children’s development. Even at low levels, lead can damage children’s brains, lowering intelligence and weakening their powers of self-control. Lead can also impact growth and cause serious blood conditions later in life, Harrop said.

“I had heard about what was happening on the Westside, and it shocked me that kids that I could be going to school [with] could be impacted by this,” junior Mia Otoski said. “It is scary how chemicals below our feet can be impacting how we learn and function.”

Programs like the Westside Future Fund began to get involved after the severity of the pollution was understood. Shortly after the fund’s involvement, English Avenue was declared a Superfund site by the EPA, or a polluted location requiring a long-term response to clean up hazardous contaminants.

“It became obvious that the funding that EPA had designated for this project was going to be completely insufficient; so, by making it a Superfund site, we got more strings to pull from,” said Harrop. “It is unfortunate that Superfund can have a negative connotation, but it really is a good thing; it means more resources being brought to the issue.”

By working with the EPA, gathering community support and encouraging philanthropy, the Westside Future Fund has made a lasting impact on the neighborhood.

“I am very proud of the number of properties we’ve been able to pull out of the last year,” Harrop said. “We’ve now tested on 149 of our properties and have found lead above the 400 parts per million at 67 of those properties. We have remediated 33 properties with the EPA.”

The Westside Future Fund encourages community engagement with the project and hopes additional support will be provided to families in need.

“The awareness building is tremendous; people understand it’s not a glowing radioactive Superfund site and a place where families live and need help,” Ahman said. “Now we must ask what are the other health inequities? How can we make this neighborhood better for children in more than just protection from lead?”