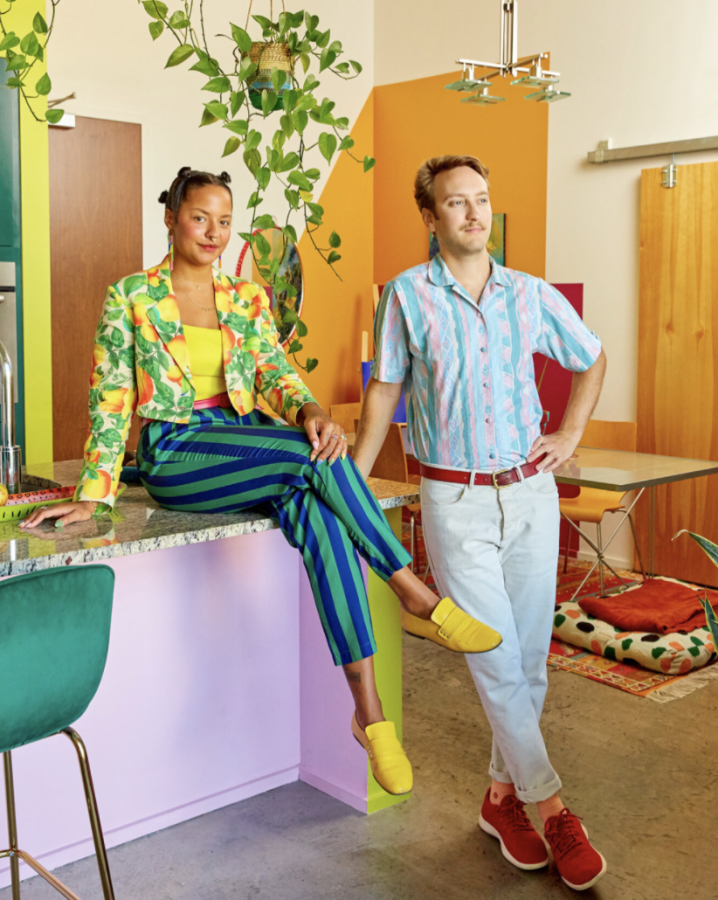 PICTURE PERFECT: Grady alum Forrest Aguar said Midtown had an impact on his photography career. The skills he learned at school have propelled him to succeed at the University of Georgia and his career post-grad. His style in art revolves around bright pops of saturated colors.

Some Midtown alums have taken their artistic education and applied it to the real world through photography and music.

Scott Semler graduated in 2016 and found that growing up in Atlanta was a catalyst for his career in photography.

“In a place as diverse and unique as Atlanta, I met a lot of people and was exposed to a lot of different viewpoints, information and aesthetics,” Semler said. “Certainly, my teachers, like (Dawn) Wadsworth and (John) Brandhorst helped me love art and exposed me to various artists and perspectives, but I learned a lot from my friends, as well. High school is a very formative time, and I think being eager for experiences is a driving force of creativity. I was always glad to meet new people, which opened a lot of doors for me in my early days of practicing photography.”

Semler then attended the Rochester Institute of Technology to study “imaging arts and sciences” with a focus on advertising photography. He received his first job shooting for Simon Malls in August 2016.

“Now, having only been out of college for what feels like a few months, my proudest accomplishment is to be sustaining myself and my work in New York City,” Semler said. “I’ve been lucky to have gotten to photograph some of the people and things that I have and look forward to any opportunity to continue honing my point of view.”

Photography teacher Kimberly Wadsworth taught Semler and admires his progress as a photographer and artist.

“I’m so proud of him,” Wadsworth said. “It almost brings tears to my eyes. The guts that it took him to reach out to photographers, move out to New York not having a job, is incredible. Especially for photographers and artists in general, you really have to put yourself out there and find your own work. It doesn’t normally just come to you. You have to beat the pavement.”

“Working with Vanity Fair was rad for sure, and seeing the work and my name in it is surreal everytime,” Semler said. “I was lucky to be able to work with my partner Maggie on this, and it was our first editorial piece in print, one prior for web only in Refinery29. We were contacted sometime in late November of 2020 and had to draft a bunch of ideas for how we could photograph the Tiffany ring, and eventually settle on a sketch that looks roughly like the image we made.”

Wadsworth graduated college with a bachelor’s degree in photography. When she graduated, she was unsure how she wanted to pursue her career in teaching. She had her first teaching job in Clayton County and connected with art teacher John Brandhorst at Midtown when she was studying at Georgia State University. Now, she is in her 17th year teaching.

“When I taught at my first job, I would have quit, and I would have done something completely different, and then I got offered a job here; so I took the chance,” Wadsworth said. “It was a thousand percent better. I loved it here, it was just a whole different feeling. It was very arts-oriented, and where I was before wasn’t at all. I just felt like the staff worked together and got along with each other better. It was a really creative and inspiring place to be.”

Wadsworth has a special place in her heart for Semler, and seeing him grow and prosper in his career has been rewarding.

“He’s really good; people know he’s really good; that’s why they hire him,” Wadsworth said. “He can work as much as he wants. I admire his stamina and his courage to work hard. He inspires me. I hope I will know him and be friends with him for the rest of my life. Not having kids, I feel like a proud mother to Scott. Getting jobs that people want and that they like and that they are passionate about is so amazing to me.”

Alum Forrest Aguar also has a career in photography. Aguar said he was a relatively well-known photographer and artist in high school and college.

“Grady was very culturally rich, and I felt very nurtured by Brandhorst, in particular, as a teacher who gave me lots of opportunities to try a lot of art,” Aguar said. “He let me do my own projects and had a lot of autonomy, which I think worked really well for my learning style and allowed me to explore myself as an artist. Grady was cool because it allowed me to consider art as more than just a hobby, like how it could be applied in different ways and use different media.”

Aguar attended the University of Georgia and started as a scientific illustration major, studying bugs and plants and doing drafting with pencil, ink and watercolor. He switched his major to photography due to his mental health.

“I ended up feeling really isolated and kind of depressed because I would spend like 40 hours drawing one illustration mostly by myself,” Aguar said. “It wasn’t a very social major. I decided to change majors; even though I didn’t know exactly where a photography career would take me, I knew that I wasn’t happy doing illustrations.”

Now Aguar works as a full-time artist and creator with partner Michelle Norris.

“I particularly feel very blessed to be in a creative world where we’re constantly working with new people,” Aguar said. “We’re not going to a nine to five job, seeing the same people every day. The assignments are constantly changing, which is very engaging. We are our own bosses; so, we have total control over our lifestyle; we’re able to travel and work remotely. This kind of quality of life is very satisfying, along with being able to make art for a living. There’s just so many advantages, and because we’re creators, we can’t be replaced by a robot.”

“Photography is one of my favorite hobbies, but it’s much more than a hobby,” Dongol said. “It’s like an escape from the real world into another dimension. It’s like a world you can customize. There is meaning behind every shot you take. Since its senior year, photography has been my main focus, and it’s just so enjoyable for me. Whenever I’m out, I bring my camera with me so I can’t miss any shots I like.”

Dongol’s style of photography focuses on capturing fun moments with his friends. Through editing, he likes to generate a vintage look.

“The greatest lesson I have learned from being a photographer was something my friend Brandon Buxton told me when I first started photography,” Dongol said. “He said, ‘Sudev, you’re either a photographer or just a person behind a camera. Your journey is in your hands. Being a photographer, you have to put yourself out there and not be afraid.’”

Alums have also pursued other forms of art, like Class of 2016 graduate Sam Wilson. Wilson found his passion for music during his high school years.

“In my sophomore year at Grady, I joined the jazz band and played bass,” Wilson said. “That was really cool because I got a lot of experience working with everyone. We had some gigs out and around town. Once, we played at an event that Jimmy Carter was at; so, that was pretty cool. I also started my own band with two of my friends when I was 16. Then I got to go on tour to New York, Chicago, Nashville, Detroit and Atlanta.”

Now at Georgia State University, Wilson studies music and will graduate in May.

“I study classical guitar right now and a lot of the stuff I learned at Grady really helped me in college,” Wilson said. “I play classical guitar music and also write music. Going to school and studying music has been great for me; I’ve learned so much, and it’s really sharpened my skills as a musician, and it has really challenged me and pushed me to be a better musician.”

“I perform a lot at different bars and social clubs, and I just performed at a church,” Wilson said. “In the world of music, you always have oddball places you play at; it’s not always gonna be a standard stage. Sometimes, you might be performing in a corner in a dark room where people are eating or there’s someone else performing or speaking. That’s just a part that makes performing different and exciting for me.”

Working in the arts and in music can be difficult for many, but to Wilson it is important to savor those moments where you are successful and confident.

“Sometimes, studying music can be really daunting,” Wilson said. “I think that applies to anything, especially in the arts. Sometimes, you feel self conscious and that you’re inadequate compared to other artists and musicians. But those moments in which you feel great feel like pure bliss. It feels amazing, and it feels like everything that you worked for has paid off.”