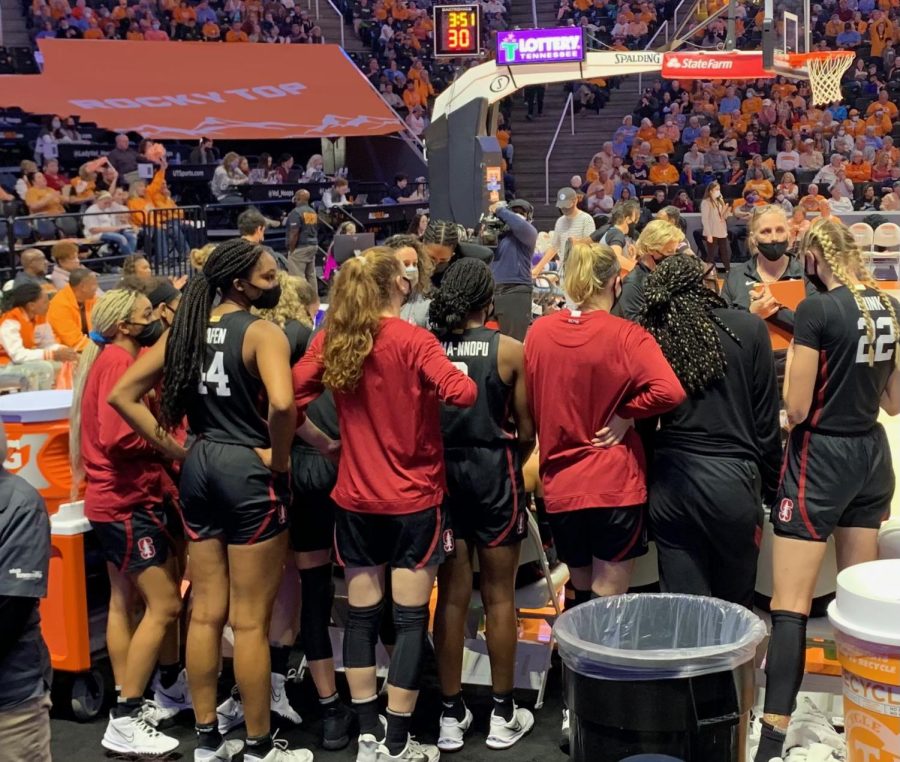 The Stanford women's baksetball team huddles before a game against Tennesse. Stanford won 74-63.

Women’s college basketball’s biggest tournament is approaching: March Madness. Multiple teams such as University of South Carolina and Stanford University are looking to make their mark this year.

University of South Carolina
The Gamecocks have been the heavy favorites since the beginning of the season, having been ranked first in every single Associated Press (AP) Top 25 Poll in the 2021-22 season. In last year’s tournament, the Gamecocks made it to the final four, where they lost 65-66 to the Stanford Cardinal. The Cardinal ended up winning the tournament. Coached by Dawn Staley, the Gamecocks finished 29-2 this season, with their only regular season loss being to an unranked Missouri on December 30th, 2021.This loss demonstrated how unpredictable the game is and that they have to bring their best every game, which has helped them grow as a team.

After winning the SouthEastern Conference (SEC) regular season conference title with a record of 15-1 in conference play, they were able to make it all the way to the SEC Championship, where they lost to Kentucky in the final minute of play, 62-64. The Gamecocks were held to two quarters where they scored in single digits, scoring only 9 in the second quarter, and then they were outscored 21-7 in the fourth quarter, causing them to give up a 12-point lead.

Boston, who is 6’4” and unstoppable in the post position, is currently one of the front runners for the player of the year award, and she recently broke Sylvia Fowles’ record of consecutive double-doubles in the SEC, getting 24 in a row.

Boston has continued to show her dominance this whole season, and with the help of two amazing guards Henderson and Cooke, it would be a surprise if they didn’t go all the way this year. If Cooke has a good shooting day and Henderson is able to feed Boston at the post, the Gamecocks will be practically unstoppable.

Stanford University
The reigning National Champions are looking to defend their title, and it’s definitely possible. They have consistently been ranked second and third throughout the season and won the Pac-12 regular season award, going a perfect 16-0 in conference play, then winning the Pac-12 Championship against Utah, 73-48. After the Pac-12 Championship players Cameron Brink, post, and Anna Wilson, guard, were named to the Pac-12 All Tournament Team, and Haley Jones was named Pac-12 Tournament’s Most Outstanding Player.

With no new point guard recruits coming in through the class of 2021 and no true point guards already on the team, the drafting of their former point guard, Kiana Williams, to the WNBA, has caused problems with getting the ball up the court without a turnover.

Stanford is 28-3 overall, with their losses coming from Texas, South Florida, and South Carolina. Tight pressure applied by the defense of opposing teams has caused issues for the Cardinal. Because Stanford doesn’t have a designated point guard, the guards have had to be rotated around to play point guard, but the ball handling skills aren’t good enough to be able to beat solid presses and defense.

On a positive side, Stanford has other successful players to make up for the missing position. Most notably, junior Haley Jones, last year’s March Madness MVP. As the number one recruit in the class of 2019, this 6’1” player can play anywhere on the court. She is dangerous when shooting on the elbows, and her drives to the rim are always strong. According to ESPNW, this season, she is averaging 13.1 points, 7.9 rebounds, 3.7 assists, and 1 block.

Cameron Brink also plays a big role in Stanford’s success this year. The 6’4” sophomore is averaging 13.6 points, 8 rebounds, and 2.4 blocks a game. Despite her outstanding statistics, she tends to get into foul trouble early in the game, but when she is on the court, she always makes a positive impact.

They are backed up on offense by a couple of very strong shooters in junior Hannah Jump and senior Lexie Hull, and a very solid defense led by Cameron Brink and Anna Wilson.
Many people on the team picked up Pac-12 awards, as Brink, Hull and Wilson all made the All Defense Pac-12 Team, and Brink, Jones and Hull made the All Pac-12 team. Head Coach Tara Vanderveer got Pac-12 Coach of the Year, Freshman Kiki Iriafen got an All-Freshman Pac-12 Honorable Mention, Brink got Pac-12 Defensive Player of the Year and Jones got Pac-12 Player of the Year.

Stanford has a lot of momentum coming into the tournament. By winning the Pac-12 Championship, it ensured that the Cardinal’s last loss was December 21, 2021. If Brink is able to stay out of foul trouble and Stanford organizes their offense more before the tournament, they have a very good shot of being back-to-back champions.