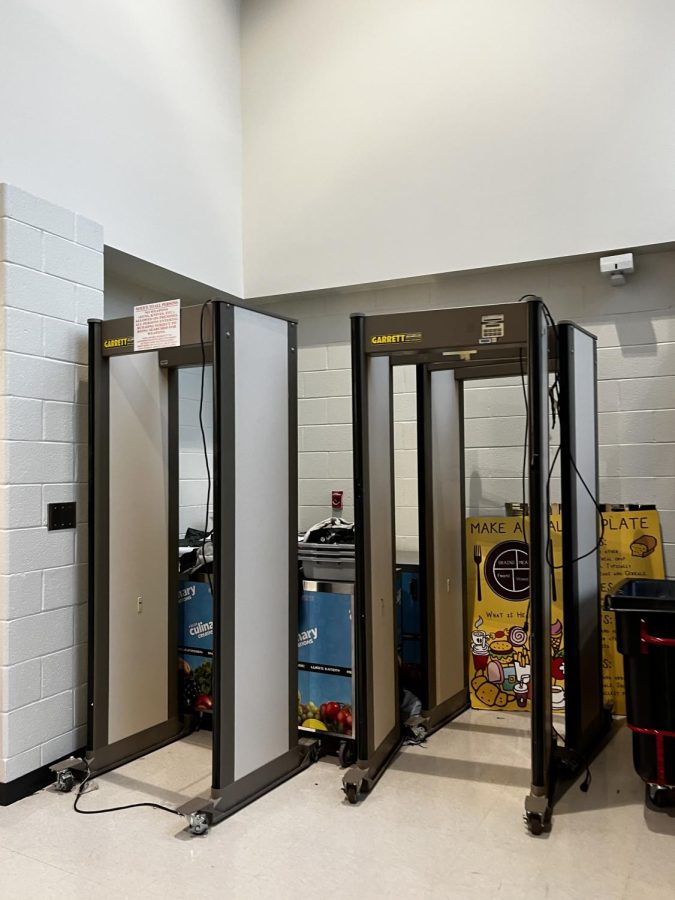 Last month, guns were found on the campuses of Midtown High School and Howard Middle School. The incidents have raised security concerns among the community, and both schools are working to ensure the safety of all students and staff. Midtown's metal detectors (above) are not in use, while Howard screens students every morning upon their arrival at school.

The recent discovery of guns at Midtown and its feeder middle school, Howard, has rattled the community and prompted a fresh look at campus security.

Last month, Midtown staff found a gun in a student’s possession after the student arrived late to school smelling of marijuana. A day later, a gun was found on a student at Howard and that student claimed they were holding the weapon for a friend. The students are facing disciplinary action and, potentially, criminal charges.

“I feel like the Midtown incident was concerning because people were saying this kid apparently had come in late, and, if [the student] hadn’t smelled of marijuana, would they have searched?’’ Midtown cluster parent Melanie Levs said. “That really concerns me because I know that you all don’t have metal detectors or bag searches … My first reaction was definitely [anxiety] and fear for my kids and for all at both schools.”

Midtown Principal Dr. Betsy Bockman, who is also a cluster parent, said she understands the worries and wants to reassure the community that security is always a concern, not just after an incident.

“Safety is a huge amount of things,” Dr. Bockman said. “It’s cameras; it’s the gates; it’s lighting; I mean, it’s a huge thing. We work with the [Atlanta Public Schools] Police Department all the time. It’s what we think about all the time. Trying to get kids to tell us things — and they do — is really important. That’s what stops things. It’s just not an easy answer, but our school is extremely safe. I’m really proud of that.”

“I feel like kids will not be comfortable at all bringing a gun to school,” Applin said. “I think we’ll see a stronger community coming together and create an environment where things like that won’t be accepted.”

Some would like to see metal detectors used to screen students daily upon arrival at Midtown, but they have not been used since before the pandemic closed schools in March 2020. Dr. Bockman said thoroughly screening more than 1,500 students every morning is a “mammoth task” and would require significant additional resources and delay students getting into classrooms.

“[You have to] search every bag, go into lunch bags, jackets, because the metal detectors go off with everything,” Dr. Bockman said. “We would have to have many more metal detectors, more tables, more people and a lot of money directed to that.”

In 18 years as a school principal, Dr. Bockman said she has never seen a gun detected in routine morning school screenings. She also acknowledges the need to create a welcoming environment for students and staff, particularly with the toll the pandemic has taken on mental health.

“It’s not that I’m saying safety is not important, because safety is what we do all the time, but it’s a really negative connotation to have people lined up outside, waiting to have their bag checked by teachers that are supposed to be forming trusting relationships,” Dr. Bockman said. “I really try to create or help create a climate where kids feel like they’re welcomed and that they’re supported, that it’s a positive atmosphere. We’re not a prison. We’re not the airport.”

Levs has children at Midtown, Howard and Mary Lin Elementary School. She has been active in parent discussions concerning the gun incidents on Facebook. Levs said she feels safe sending her kids to all three schools, trusting the community as a “team.” She recognizes that metal detectors could work as a deterrent, but not in all circumstances.

“Say that kid at Howard … if this was a kid that people don’t see as a threat or worrisome, he’s not going to be troubled that it would go off on him because they don’t necessarily search everyone after it goes off,” Levs said.

Along with other safety measures, Midtown emphasizes use of the anonymous “Say Something” program which was adopted at schools around the country in the wake of the Sandy Hook Elementary School shooting in December 2012. The reporting system allows students to anonymously report an issue through the app, hotline or website if they think a classmate might be at risk of harming themselves or others. Applin said making more students aware of the program across the cluster is an immediate priority.

“We’ve had [Say Something] in place, but we are making a big push to make sure everyone is aware of it,” Applin said. “The Secret Service did a study of active shooter events a couple of years ago. In that study, they noted that 84 percent of the time someone knew in advance and that is to me — that’s just crazy. That means 84 percent of the time, no one said a word, but they knew about it.”

According to Dr. Bockman, Midtown students also frequently reach out to trusted teachers, counselors and other staff on a variety of concerns, including drug use and eating disorders.

“[Students should] report anything that they even think is off — anything— even if they just think a student is acting strange,” Dr. Bockman said. “We really try to intervene really quickly to see if it is a problem. That is, to me, the best thing: all of us being watchful, caring. Any kind of weapon, any rumor of a weapon, needs to be reported right away to anybody.”

According to Applin, Midtown Cluster schools reported 29 safety incidents this school year, the lowest number of incidents reported in any APS cluster. Fights are also in the category of “safety incidents,” though not all of them rise to the level of requiring police investigation.

In the past five years, there have been two incidents involving a gun at Midtown: one in October 2019 and the other on Jan. 18. The 2019 incident was discovered through a tip Assistant Principal Willie Vincent received from a student prior to the start of the school day. When the student arrived at school, they were searched.

“I talk to [my children] about keeping a lookout for something, really speaking up and saying something if something doesn’t look right,” Dr. Bockman said. “You can do that and still be a friend.”

Freshman Marian Waller wasn’t aware of the most recent incident at Midtown until days later. She said finding weapons is an issue any school can encounter, and there are inherent safety issues at any large public high school, not just Midtown.

“There’s just so many people, and you just can’t control everything,” Waller said. “When you try to input metal detectors or whatever, that still doesn’t really solve any problem. I think better education is a big thing: more precautionary measures like telling the students how to stay calm [and] what to do in a situation like that.”

Midtown parent Elizabeth Soto has had three daughters at Midtown and, throughout the years, has never felt worried about sending her children to school.

“I trust the community that’s there and the administrators and the parent volunteers that are there,” Soto said. “I just feel like there’s a good mix of people there that I would trust my children to.”

Midtown will continue hard and soft lockdown drills to prepare in the event of an emergency. Howard students will also have active shooter drills, which will be announced in advance to reduce student anxiety. Due to the school expansion, Midtown will get a third APD School Resource Officer. However, responsibility for student safety extends beyond school walls and Applin says everyone has a role to play in keeping schools safe.

“When you talk about safety, it’s not just the responsibility of the police or the school, but also the parents and the students, the teachers,” Chief Applin said. “We’re all in this together. It takes all of us to really help get ahead of a lot of the issues that we were seeing.”

Dr. Bockman is also calling on parents to talk to their children about reporting anything amiss, despite how uncomfortable the subject matter may be.

“I don’t want this in my world as a parent,” Dr. Bockman said. “You don’t want to talk about it and have it in your world, but everything that happens at Midtown is a function of society. Guns are way too prevalent. It is way too easy to get guns.”

Applin said safety is the responsibility of everyone. He encourages parents to check their childrens’ phones, bags and rooms occasionally.

“It’s not just the police, it’s not just the school; it’s all of our responsibilities to engage and encourage the community to, if they see something, let us know, give us a call, call 911, reach out to somebody, talk to an adult,” Applin said. “I think it’s very important. If we can establish a community where we’re seeing things that we’re notifying authorities about . . . we’ll definitely see things change for the better. We’ll create a deterrent that’ll make people think twice about doing something. I just encourage everyone to be a part of the solution.”