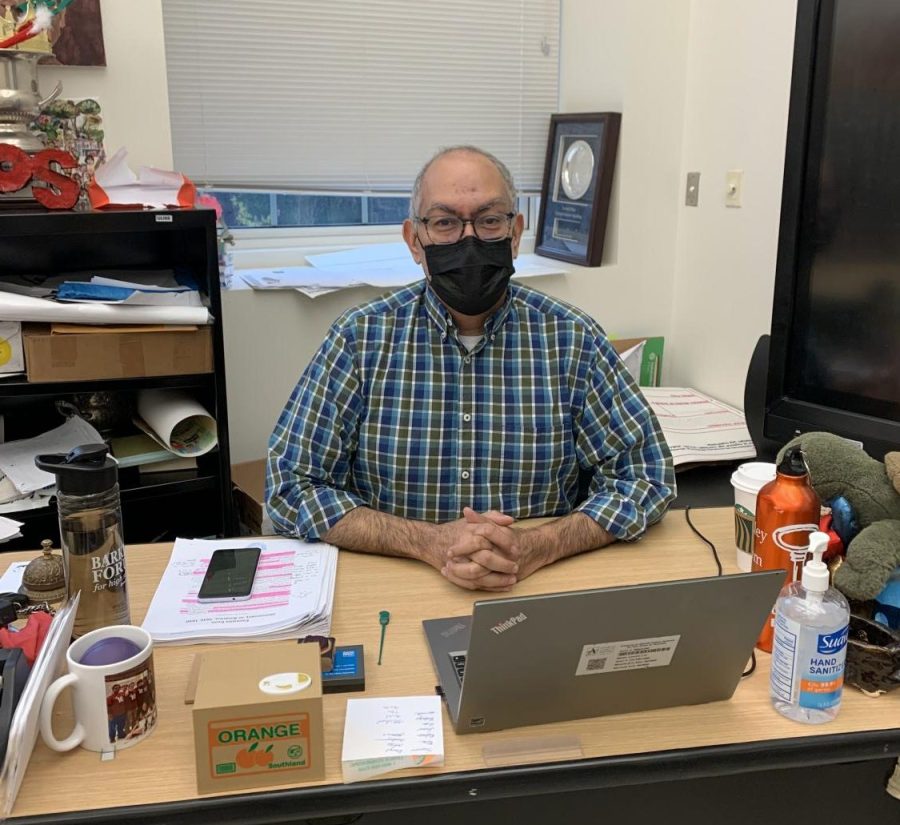 Mario Herrera has been part of the Midtown community for 17 years, during which he has served as a debate coach and taught AP Seminar, AP Research, and Speech Forensics. Herrera’s history hasn’t always been teaching, however.

“I worked for Disney for a little bit, I was choreographing show choirs at high schools for about 12-15 years, but I also worked in healthcare for 11 years,” Herrera said. “I was coaching debate the entire time while I was working at those other jobs.”

After his mother passed away, Herrera started teaching to follow in her footsteps. He decided to go back to school in 1997 in order to make an impact on the next generation.

“I decided to go into teaching not only because of my mom but also because I figured if I was spending all of my time coaching speech and debate, then why wasn’t I teaching it,” Herrera said.

On top of being a teacher, Herrera is also the head coach for the Jesters speech and debate team and has been coaching debate for the past 30 years. Under his leadership, the debate team has won the state championship 12 years in a row.

“One of the best experiences on the debate team was when I lost in the first elimination round of the state tournament my sophomore year,” senior Peter Haynes said. “The reason that it was actually a good experience was that Mr. Herrera really helped me develop from that loss to become a much better competitor.”

Junior Walker Land has been on the debate team since his sophomore year.

“Mario is a very good debate team leader and he is very on top of everything school and debate related,” said Land. ”He is very involved in multiple different things and is incredibly dedicated to being a great teacher and debate coach.”

While Herrera loves his job and what he does, teaching doesn’t come without its challenges.

“The most challenging part of being a teacher is being told what to do by people who haven’t been in classrooms for years,” Herrera said. “It’s frustrating when I teach my students to use their voice, and then when teachers use their voices they are ignored, so I think the biggest frustration is bureaucracy.”

Herrera’s highlight of teaching is seeing the lightbulb go on in students when they understand the material.

“My favorite part about teaching is seeing the ‘ah-ha’ moment when a student gets a concept,” Herrera said. “I like learning from my students and my colleagues. I like the challenge to make things interesting and grow as a speech and debate coach as well as an AP teacher.”

Although Herrera has made great strides with the debate team, COVID-19 put them in a difficult spot. All of the competitions since the start of the pandemic have been fully virtual.

“These past two years have been amazingly wonderful and tough,” Herrera said. “It was difficult to get used to what was the new normal. Trying to make sure that my students were all okay during virtual school was probably the biggest struggle of quarantine. The constant worry and high alert of wondering if everyone was alright was tiring.”

Students feel that Herrera’s class is something special.

“Coming into ninth grade was stressful, especially after quarantine, but he’s made it a lot better,” freshman Marian Waller said. Waller is in Herrera’s speech 1 class. “I look forward to his class and he has taught me a lot of things about high school and life.”

“Mr. Herreras’ class is unique compared to others because I am able to talk about issues teachers normally wouldn’t talk about and I’m actually able to voice my opinion,” Bolster said. “He actually listens to the students and interacts with them in a way that’s relatable and comforting.”

“One of the best qualities of Mr. Herrera as a mentor and a coach is that he will be completely honest with you,” Haynes said. “You can tell how genuine he is and if you need to step up your game he will definitely let you know. Mr. Herrera has enriched my high school experience immeasurably.”

Being a teacher to Herrera is all about finding joy within his students.

“At the risk of sounding cheesy, the best part about being a teacher is the laughter of students, when people are themselves, and when you get to see who the students truly are,” Herrera said.