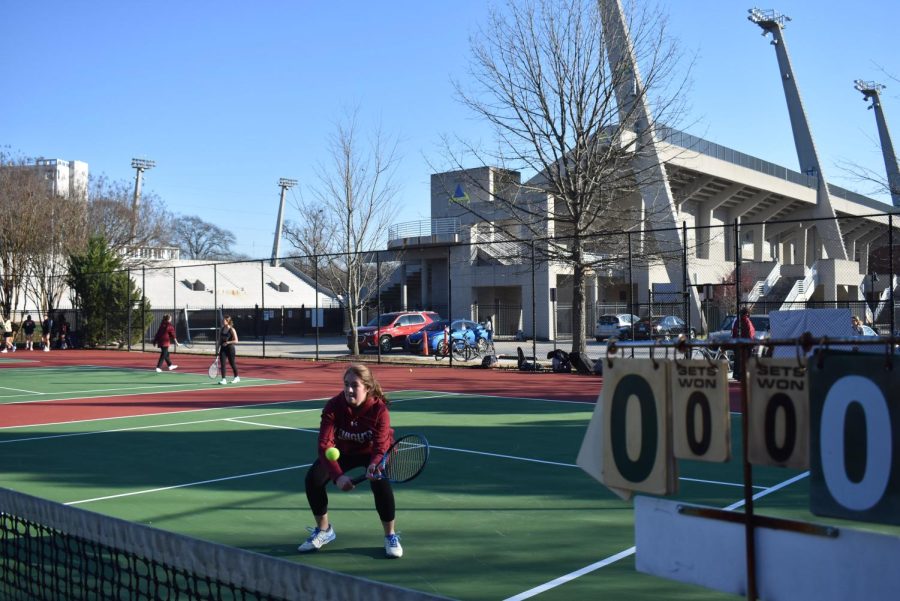 Strong underclassmen have made up for the loss of Michelle Durst and Emma Menzies to graduation.

“I think this season is going to be a really good season,” senior co-captain Annie Laster said. “Last season we made it to the Final Four of the state championship, and we lost two seniors, but this year we got some new talent. I think we have a shot to get at least as far as we did last year. I have not gotten a state championship win since I’ve been in high school, and I think this is the year that we get one.”

The team had around 30 girls tryout this season, to coach Val Taylor’s surprise.

“We have some ringers; these freshmen coming in are really good,” Taylor said. “We had about 30 girls tryout; that’s unheard of. The [team] was third in the state last year; success breeds success; so we had a lot of girls and a lot of interest. We had a lot of people to pick from.”

Many players have been practicing outside of the Midtown court’s, including freshman Devon DuBose.

“I train with a private coach every day of the week, and in the summer, I was training a lot with weight training,” DuBose said. “Now, I do it on the weekends, which really helps my strength and just being able to practice every day.”

To enhance their skills and create a powerful lineup, Taylor said the team’s strategy is to be on the court as much as possible, along with playing better teams before region play.

“The practice has been more intense, and we’ve really been focusing on trying to incorporate as many people as possible;so, we can have as many ball touches as we can,” Laster said.

The team’s chemistry drew in players like sophomore Jameson Knight.

“I joined the tennis team because I like playing tennis, and I get to meet new people,” Knight said. “I do not feel intimidated at all. The environment is very welcoming and nice to the new players.”

Joining alongside Laster as captain this year is junior Tori Williams. As one of the only seniors on the team, Laster is a leader, Taylor said.

“She is a great leader,” Taylor said. “She knows the game well, and can convey that to the team. She is always positive to everyone even if someone misses the shot she will say something positive.”

Taylor said she thinks the team’s chemistry, talent, leadership and hard work will take it far.

“This year I think we are going to do better than last year when we were third,” Taylor said. “This year our goal is to be first, I think we’ve got it. We have the tools to be first, we’re going to really have to work hard, work long and hit a lot of tennis balls, but if we do that the fruits of our labor will be great in April.”