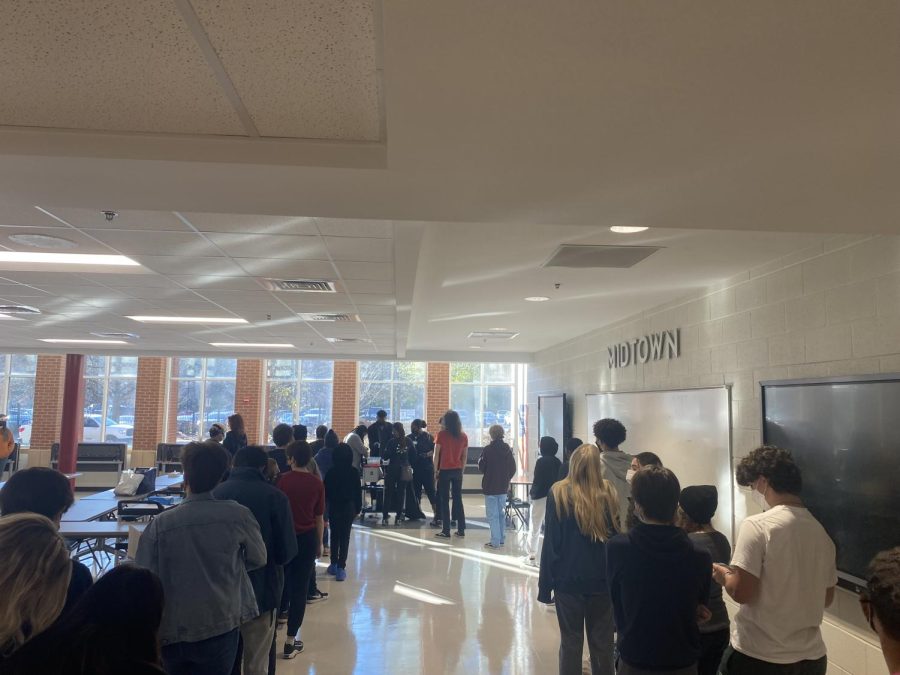 APS has expanded their surveillance testing initiative to include the option for students to be tested twice-weekly. This comes amid increased demand for testing as cases surge across the country due to the Omicron variant.

APS has contracted Viral Solutions to test students and staff twice a week. According to APS, twice-weekly testing is mandatory for teachers, and there are incentives for participating.

The district said employees who consistently participate in the twice-weekly surveillance testing and are fully vaccinated will be eligible to be paid by the district and not have to use sick leave for Covid-related absences.

History teacher Mary Van Atta said she thinks this policy is in place for two reasons. First, instead of a vaccine mandate, the testing schedule would help identify positive cases and limit spread to students. Second, surveillance testing helps the district track whether there are enough staff able to come to work to operate schools efficiently.

“I also think it is a good thing because tests are hard to get, sometimes,” Van Atta said. “We know whenever there is a big surge in variants, tests are harder to come by and more expensive. And that just clogs the work for businesses like APS and schools like Midtown that want to see how many people they have that are healthy enough to come to work.”

Starting this semester, APS opened testing twice a week to students, as well. Senior Adeline Diem has been sharing information via social media on how to get tested for Covid-19 at school because she found that many students didn’t know how to sign up.

“I get tested every Friday, but a lot of kids in my class are like, ‘Wait, how do you get tested?’” Diem said. “They announced they would be doing [Covid-19 testing] two times a week, and I was like, ‘You know what, people might actually want to get tested,’ so I posted [information] on my Instagram story because a lot of people might want to get tested. Right now, not many people do get tested, and I just wanted to increase that number so we are all safe.”

Freshman Lailah Stoudenmire is taking advantage of the new twice-weekly testing schedule by getting tested on Tuesday and Friday mornings.

“I like [the twice-weekly testing option] so there is less of a risk of more people getting it so we know if someone has it – basically, it’s more efficient,” Stoudenmire said. “If you don’t get tested, you could possibly have symptoms and you could risk the people around you, and it could be really dangerous.”

Junior Taylor Ward has gotten tested at Midtown consistently since the first semester. She agrees that getting tested twice a week is important, especially due to the heightened transmissibility of the Omicron variant of Covid-19.

“I think it’s really smart because this variant has spread really quickly, and it’s more contagious than it was in the beginning,” Ward said. “I think it’s important [that as many students as possible get tested] because … it could spread it easily, and if a student gets it here, it could spread to their household.”

Diem said she believes it is important for everyone at school to get tested so that it is easier to control the spread of Covid-19. According to Bookkeeper Alex Coffman, approximately 800 people have signed consent forms on file, and the school tests about 325-370 students each day testing is offered.

“I feel like we get a lot of negatives because the people who definitely take care of themselves get tested. I just want everyone to get tested,” Diem said.

Van Atta shares a similar sentiment and has been making sure her students have the information they need so they can participate in the district’s surveillance testing at Midtown.

“We need to know who has Covid and who doesn’t,” Van Atta said. “People can be asymptomatic or have very mild symptoms. If people know they have it, that way they can make better decisions about keeping themselves safe and other people in society safe. I think it is really very responsible. I like that the district has opted to allow students to test twice a week now. I understand that it’s an imposition on the first period, and I get that, but there’s a greater good benefit.”

Struggling to keep up with demand

Viral Solutions recently had to change the type of test they used for surveillance testing due to shortages of the previous test used. According to Brandi Thompson, who works for Viral Solution and helps run surveillance testing at APS schools, both tests provide quick results and have the same sensitivity. The major differences are that the tests are made by different companies, and the process for processing the tests takes longer, which has lines to be slower on testing days.

“For me, I feel like it is more labor-intensive with the new tests we have,” said Thompson.

Additionally, in late January, due to supply chain issues, Viral Solutions was not able to obtain enough tests to perform surveillance testing on one of the days they were scheduled to do so.

“We came into a little hiccup where we did not have enough tests to cover the assigned shifts,” Thompson said. “So, we have to make a final call to say, ‘We aren’t going to have enough to test Friday’… Right now, everything is on a day-by-day, case-by-case basis.”

Diem has been getting tested for Covid-19 outside of school often as a precautionary measure, not only to protect herself, but also to protect others who are at a higher risk.

“I’ve had a few Covid scares in my family, and I’m really scared,” Diem said. “Some of my friends are immunocompromised. I have some family members that are immunocompromised, and I really don’t want anyone to get hurt. I’ll be fine if I get it, but a lot of people I know won’t.”

Diem made an appointment at North DeKalb Mall and still had to wait in a multiple-hour line to get tested.

“I went to one that was three hours long … and then I went to one where there was no line, and it took 5 minutes,” Diem said. “It varies a lot. My dad had to drive to a red county to get [a test].”

After experiencing what she thought could be Covid-19 symptoms over holiday break, Van Atta also went to get tested.

“I literally sat in a car line for four hours, which was out of control,” Van Atta said.  “I mean, it was really out of control … It just proved to me how broken the whole structure is.”

Van Atta said that there was an option to make an appointment, and the line could have been shorter, but that would have required paying $175 out of pocket for the test.

Van Atta lives near the Viral Solutions testing site in Brookhaven and said lines were long there, as well.

“For a week, when I’d be driving through that area [the Viral Solutions testing site in Brookhaven], I would see an entire lane of traffic backed up for about a mile waiting to get tested,” Van Atta said. “I know the people doing these tests are exhausted. They are doing the best that they can. The doctor that took my swab said that the night before, they had been there until 2 a.m. running tests.”

Thompson said besides long lines, there were no major issues at other Viral Solutions sites, but that the time it takes for people to receive results was longer, due to increased demand.

Ward has also gotten tested outside of school but said her experience has been more efficient.

“I do it really quickly because now they have more testing sites where you can just drive up instead of walking into a place,” Ward said.

More people have started using at-home tests as well, but at-home tests can be hard to find and pharmacy shelves are often empty.

The Biden Administration has responded to the surge in cases and demand for testing by announcing Americans can order four free, at-home Covid-19 tests. Senior Frankie Soto’s family has already ordered its tests and are awaiting their delivery.

“I think it’s important to continue testing; so, I was pleasantly surprised when they announced that each household gets four tests,” Soto said.  “However, as a family of five, I was a little disappointed that we would have to share them. It’s especially important to order them now with the height of the omicron variant, especially since the exposure risk at school still remains high, in my opinion. It was a pretty simple process to order them; however, we have not received ours yet; so, it’s taking longer than anticipated.”

Ward is skeptical of the efficacy of this initiative because she worries that if people test themselves, the results could be inaccurate.

“I feel like it’s not going to work, honestly, because I don’t think it’s going to be right or accurate,” Ward said. “People don’t read directions and people do whatever they want.”

Stoudenmire is also skeptical of how widespread at-home test distribution and use will play out in practice.

“I don’t really like that idea,” Stoudenmire said. “It could be worse. You could get a false negative or a false positive and then you don’t really know if you have it or not and you could still endanger the people around you.”

Emphasizing importance of testing at Midtown

“I would say it is based upon the demographics of the school, and it is based upon the staff really stressing the importance of testing,” Thompson said. “But, here at Midtown, I count it as an honor that you guys are really diligent about the safety of others and your families, because you are here all day, and then you go home with your families all day. So, we want to do our diligence and just protect everybody and do what we can do.”