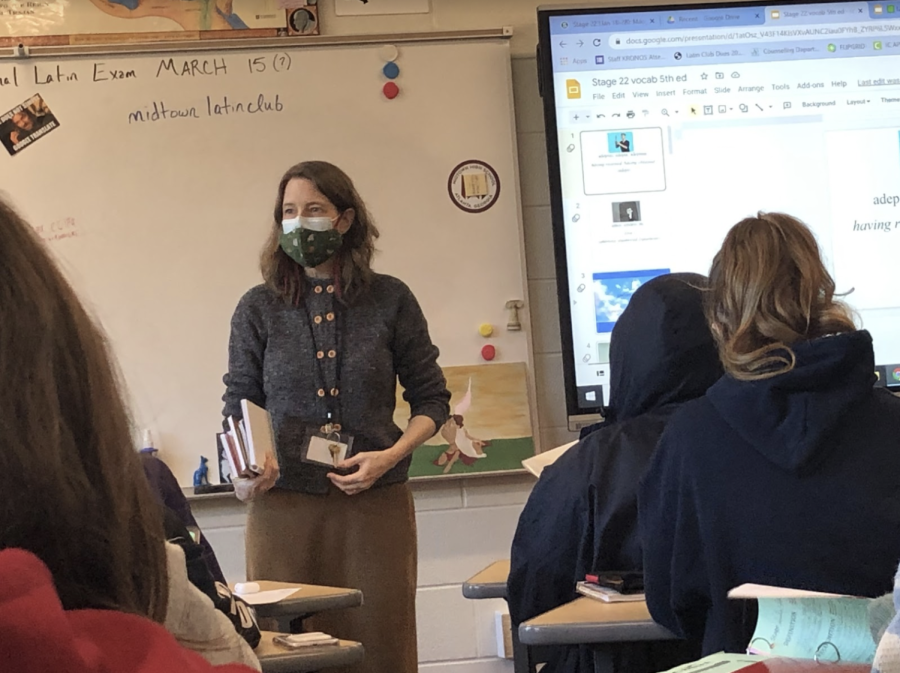 Latin teacher Amy Leonard has been working at Midtown for 17 years, passionately teaching the thought-to-be-dead language of Latin.

The first year of in-person school, still in the middle of a pandemic, Leonard’s classroom in the new A-wing of the building is filled with the sounds of students reciting proper forms of Latin words to the tune of familiar songs. Leonard has been helping students readapt to in-person learning, something especially needed to grasp the complex curriculum of Latin.

“Language by its definition requires that you acquire vocabulary and memorize things, and we had to throw that out the window [during virtual school],” Leonard said. “And so it kind of weakened what we did, and if we had stayed [virtual] I think I would have completely changed my teaching to a different format. But since we have gone back to in-person classes, I’ve mostly just gone back to the more traditional way of teaching, memorizing and reading.”

Leonard was first intrigued by Latin when she took it in college at the University of Georgia.

“I did not have [Latin] in high school and from the minute I had it in college I was like ‘This exists?’,” Leonard said. “And it just brought together a whole bunch of interests that I didn’t even know I had. I realized that I liked words and I liked history and I liked logic.”

Even once she found her interest and passion for Latin, it took a little more to help her get into teaching the subject. At the time, teaching Latin was not something that Leonard thought was an option for her.

“You go through life doing the things that you know, and so it took me a while to learn that that [teaching Latin] was a thing, and once I knew it was a thing, it was just a question of finding out how to do it,” Leonard said.

Leonard had many people as her mentors and inspirations, helping her learn to not only teach but to engage students in the subject matter and to make them genuinely enjoy the class and topic.

“One of my graduate school friends had been teaching for ten years, and he was my office mate,” Leonard said. “And because he had been teaching for 10 years, I just absorbed everything he did. I had some really strong influences that helped me be passionate about what I am doing as opposed to just liking what I am doing, kind of putting purpose into what I was doing.”

Now, after 17 years teaching at Midtown, Leonard has led many students, showing them the many components that go into the language. Latin is not just vocabulary, but culture, history, art, and more. Senior, AP Latin student and Latin club officer Marin Henley had Leonard as her teacher her sophomore and senior years, and she sees the passion that Leonard has for the language.

“I think that both [Mrs. Leonard] and Mr. Allen do a really good job in making a subject that can be rigorous at times more fun and easy, and it really makes a difference to have a teacher who loves their job as much as Mrs. Leonard and Mr. Allen do,” Henley said.

Leonard’s coworker Scott Allen, who also teaches Latin at Midtown, has admired her dedication since they first began to work together.

“She is amazing. I mean really and truly, just so passionate about teaching Latin and she is so into pedagogy. She was always going to conferences and learning what other teachers are doing and adapting it in her room,” Allen said.

Freshman Donovan Doyle has been taking Latin since middle school and has enjoyed the subject ever since.

“I originally started taking Latin in middle school based on random selection but decided to continue taking the class,” Doyle said. I felt the subject was interesting, learning about an ancient language and also an ancient civilization.

Even with COVID-19, Leonard and Allen have developed a method to ease students back into in-person learning. They do not want their students to struggle too much with the sudden change from virtual learning right back to the classroom.

“I would say that the only thing that’s changed is that the students have had to adapt back to [in-person learning], and we have had to build a couple ‘safety nets’ into the system to help,” Leonard said, “I didn’t want to pull out the carpet from under them completely because honestly, it’s hard.”

Freshman Latin student Marian Waller is grateful for easing back into the language now that classes are in-person, for learning Latin requires a lot of visual learning and explanations to fully understand.

“I think it’s really nice of her and it shows that she understands the transition has been hard for us,” Waller said.

Despite the drawbacks, Leonard feels there are good things that came from a year of virtual learning.

“It made me grateful for having students in class again,” Leonard said. “For me, I was approaching some teacher burnout before COVID, and going home and having to teach that way reminded me that I do value teaching in person even with all the complications, I think it breathed new life into my teaching.”