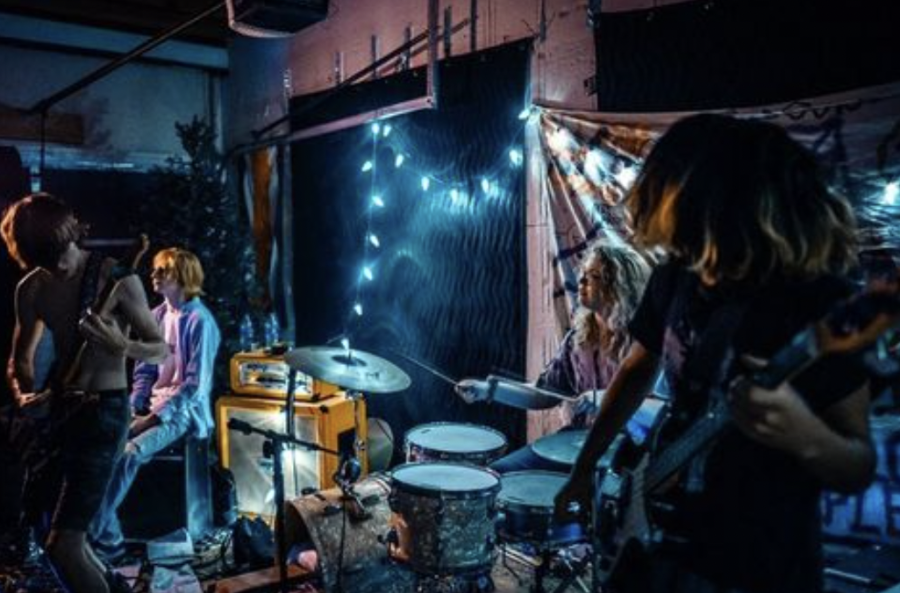 With a mixture of punk and rock sounds, the student-run band “Nakid Ailen” diversifies the music scene in Atlanta.

Senior Elijah Senter is Nakid Ailen’s vocalist and guitarist. He said the band started with himself and a former bandmate as an “art project.”

“Our ex-bandmate made a bunch of weird, oddball zines and I loved that art style,” Senter said. “We combined our love of really weird stuff and music, which resulted in Nakid Ailen.”

The band decided on their name as a deliberate misspelling of “Naked Alien” after finding the name was already taken.

“Naked Alien is a German band that released one album in 2009,” Senter said. “The name ‘Nakid Ailen’ embodies the spirit of the band better than ‘Naked Alien’ would.”

After deciding on a name, Senter asked two of his friends to join the group, and the band was born. Junior Ari Harrelson plays the drums for Nakid Ailen and says the band can best be described as “punk.”

“We aren’t a straight-up punk band, but punk is probably the best descriptor for our sound,” Harrelson said. “We experimented with shoegaze, but it didn’t really work out.”

Shoegaze is a mixture of indie and alternative rock.

Senter and Harrelson instantly connected and decided that Harrelson’s drum skills would be the perfect addition to the band.

“Ari and I got close over text and we realized they could be part of the band when we heard that they play the drums,” Senter said. “We connected right away.”

“When I met Elijah, there was already a big musical connection there,” Arieh said. “The rest of the band thought I was a classic rock kind of guy at first, but when they realized I was into the same stuff, we clicked right away.”

Since its start, the band has since released 23 songs.

“Our song ‘Goo Man’ really gets us going, it gets the crowd going and it’s a really fun song to open with,” Senter said. “It’s how we get the blood flowing.”

Junior Alexander Spiegel, a Nakid Ailen concert attendee, says the crowd goes “feral” because of the band’s ability to put on an entertaining show.

“The crowd matches the energy of the musicians because they’re all still tightly-knit, and they know what it’s like to be on the stage,” Spiegel said. “They always let loose and have fun. It’s really cool to see.”

Senter’s sister, Aubrey Senter, is an eighth grader at Howard Middle School with a punk band of her own. She believes the music scene for young artists is “really unifying and supportive.”

“Everyone does everything for each other, and if you need a drummer or guitarist, there’s always someone who will do it for you,” Aubrey Senter said. “I feel like Nakid Ailen is our big-brother band and performing in front of that scene is really unifying. You can feel when the crowd likes your music — it’s cool.”

Senter said he’s excited for his sister’s band and what they’re contributing to the local music scene.

“I’m really excited to hear what they do,” Senter said. “I’ve heard some of their music because I make them play songs for me in exchange for the use of my equipment.”

Spiegel acknowledges how  unique Nakid Ailen is and hopes other Atlanta residents will support the band.

“Even if you’re not into their music, their shows are a super fun experience and everyone is into music so they’ll talk to whoever approaches them,” Spiegel said. “Even without music, they know how to interact with the crowd and put on a good show.”