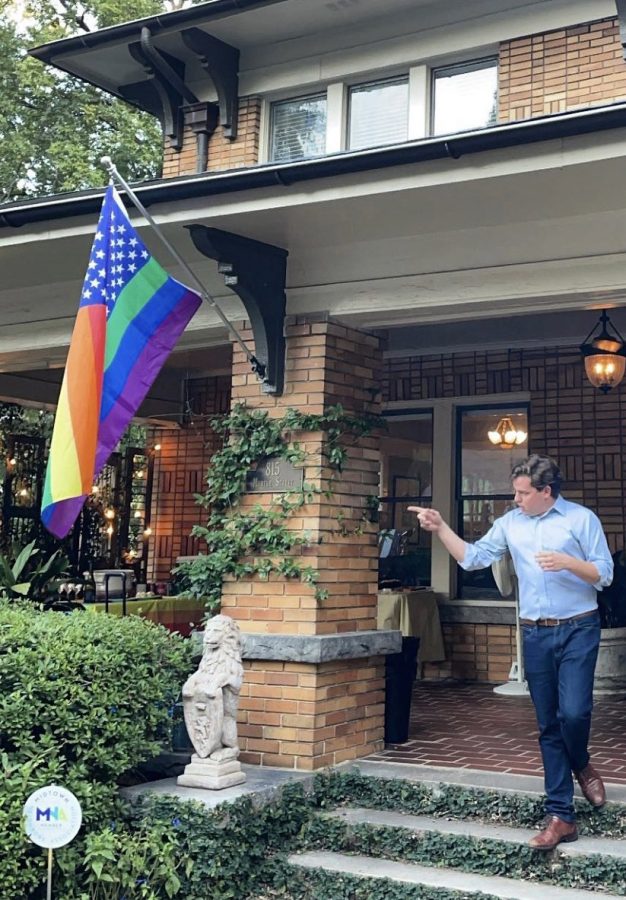 For the first time in history, the Atlanta City Council has four openly LGBTQ+ members.

Grady alumnus and City Council member Matt Westmoreland came out as gay on Jan. 2 via Instagram and Twitter. Westmoreland said he wrestled with whether to say anything publicly.

“It has been a journey that I have gone through internally first, and then with some close friends and family over the last year,” Westmoreland said. “It’s kind of a personal thing. I never planned months ago that January second is the day that I’m going to announce this. It was the start of the new year, and it was the start of a new term on council, and this was a thing that was going to be new to almost everybody.”

Westmoreland will now join the three other openly LGBTQ+ council members, including Liliana Bakhtiari, Alex Wan and Keisha Waites. Wan became the first openly gay male member of council in 2010. Bakhtiari is the first non-binary person to serve on the council and the first queer Muslim person to be elected to any office in the state of Georgia. Waites is the first Black lesbian on council.

“We have such a diverse caucus,” Bakhtiari said. “Matt’s been so brave and communicative and open and honest about coming out. That’s really important for people to see; it’s never too late for people to come out. They can come out at any stage, no matter what in life. Alex is amazing and is there and ready to lead younger LGBTQ+ individuals who are finding their way. Keisha Waites is super passionate. And then there’s me, who identifies as nonbinary and genderfluid, which brings up a whole different conversation to council.”

Westmoreland attended Morningside Elementary, Inman Middle and graduated from Grady High School in 2006. He said he has watched the city’s attitudes toward the LGBTQ+ community change while growing up in Atlanta.

“I think Atlanta has become more accepting of the LGBTQ+ community over the years,” Westmoreland said. “Even during my lifetime, Atlanta, specifically, and society, more broadly, has continued to become more accepting, but, even more than just accepting, I think there has been an embracing of this and other types of diversity.”

“There are LGBTQ+ people everywhere,” Wharton said. “Atlanta, especially, has been a magnet in the South for people who want to find a community; so, like a lot of other major cities, Atlanta has a pretty large LGBTQ+ population, and a large population of allies. Having representation on the council, I think that it is important to make sure that our issues are not ignored. When they’re part of the decision making, it’s hard to ignore.”

Wharton was raised in rural Virginia, where there was little to no LGBTQ+ representation in government, and recognizes the significance of being represented in leadership as a minority.

“Growing up in the South, having any kind of LGBTQ+ representation in politics was very rare, if not nonexistent,” Wharton said. “But now, this is amazing. I grew up in a different time, where having a GSA Club at my high school would have been unthinkable. We would have just gotten beaten up daily.”

Many LGBTQ+ students like senior Jack Kast also feel appreciated to be represented on the City Council. Kast, who identifies as queer, hopes this representation will benefit Atlanta.

“As a queer kid myself, I appreciate having representation on the City Council, especially for more progressive members like Liliana Bakhtiari,” Kast said. “But my principal concern is more about what the members are doing to progress the interest of the LGBTQ+ community in Atlanta.”

“I’m proud of Mr. Westmoreland and the other LGBTQ+ people on the City Council for being open about their identity, and I’m proud of our city’s environment for welcoming them,” Ruhe said. “However, I find it important to note that individual identity doesn’t equal progressive views, and we shouldn’t support candidates solely on the basis of belonging to a certain group.”

Wharton said he hopes the LGBTQ+ representation will prove successful to the community in Atlanta.

“I’m hoping that they represent us well and that they do a good job,” Wharton said. “I feel like whenever minorities or any group start getting a chance to have representation in leadership, we’re all holding our breaths a little bit saying, ‘You have to do a good job; don’t mess this up.’ I think every minority has felt that at some point.”

Westmoreland said he wanted to share a part of himself to help other people with their confidence.

“Once you get comfortable and honest with yourself, you turn around and think about sharing that authenticity and honesty with other people,” Westmoreland said. “I wanted to share my small piece of that in hopes that other people would continue to feel confident and comfortable doing the same. It’s a piece of who I am. One day, I hope we’ll get to a world where people don’t really feel the need to make such a pronouncement.”