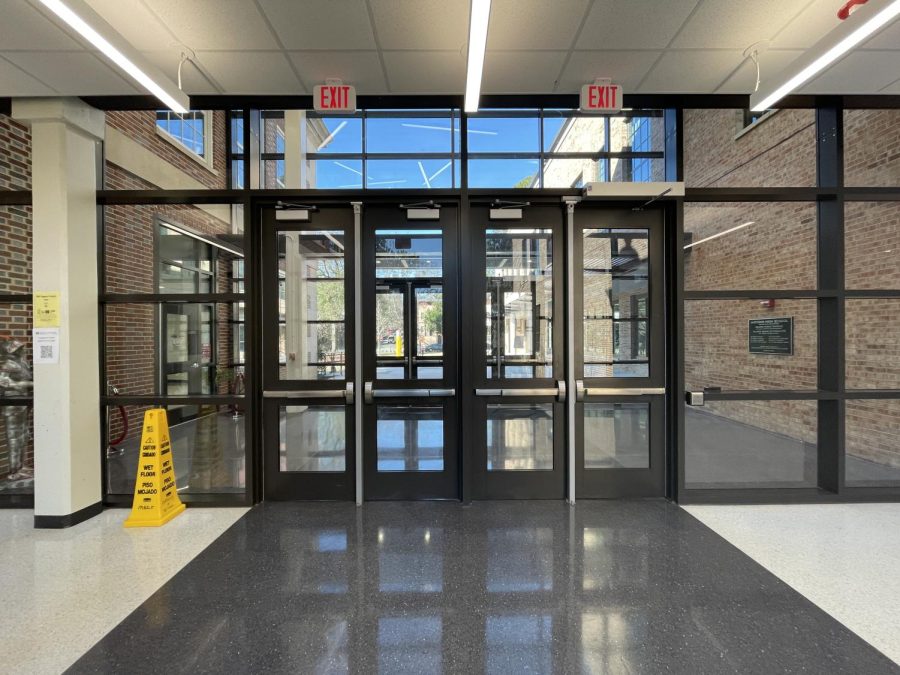 In the late afternoon on Jan. 18, students and parents were notified by Principal Dr. Betsy that a student who arrived late at school was searched near the school entrance, and found to be in possession of a weapon. In a stark contrast to this incident, on Jan. 5, Georgia Governor Brian Kemp announced his plan for a new state law that would loosen the requirements to carry a handgun in public.

In the late afternoon on Jan. 18, students and parents were notified by Principal Dr. Betsy Bockman that a student who arrived late at school was searched and found to be in possession of a weapon. The APS Police Department is now in possession of the weapon and the student is facing disciplinary charges.

In a stark contrast to this incident, on Jan. 5, Georgia Governor Brian Kemp announced his plan for a new state law that would loosen the requirements to carry a handgun in public. This announcement was made from “Adventure Outdoors,” a gun shop in Smyrna, Ga. that calls itself the “world’s largest gun store.”

With this new law, anyone can carry a handgun, openly or concealed, without the need of a license. This would allow convicted felons to purchase and carry handguns in public. Nothing would stop them from entering a school, or any public place and jeopardizing the safety of the students or citizens.

As of now, to own a firearm in Georgia, you must pay $75 to register with the state and pass a background check before being issued a license to carry a handgun in public. This law protects the safety of Georgia citizens, especially students who are at risk of the rise in school shooting threats in the state. Allowing anyone to carry a gun would bring danger to not only the public, but also to law enforcement.

Kemp believes that this new law would allow for all families in Georgia to protect themselves and uses the fact that 20 other states don’t require a permit to back up his plan. It is regressive thinking to believe that allowing anyone, no matter their mental state or past history, to carry a gun in public is safe. Since 2013, there have been 2,007 gun violence related deaths in the United States, and allowing easy access would only drive up that number.

On Nov. 8, 2022, Governor Kemp will run for re-election against Democrat Stacey Abrams and former Georgia Senator David Perdue, who has the support of former President Donald Trump. Abrams has already announced that she will call for an increase in firearm restrictions to reduce violence. This is the kind of protection and thinking that we need from someone who has the power to control the safety of all students and teachers across the state. Voting for Kemp in the upcoming election will only weaken the protection of everyone in the state due to this new bill.

Students should be able to go to school without having to worry about their safety. Forty-six school shootings took place in Georgia in 2021, making it the state with the 10th most school shootings. Last year, Fulton County Schools received over 140 school shooting threats that caused students, faculty and parents to fear for the safety of themselves and their children.

Midtown has had recurring issues with gun possession, with a student in 2019 being arrested after bringing a handgun and marijuana to school today in a backpack. The situation in 2019 brought up concerns surrounding students’ safety outside of school and how students felt the need to have weapons in their belongings to protect themselves off-campus. While loosening gun restrictions helps protect the individual, it increases risk to the overall community. Midtown’s situation regarding safety of student versus safety of the student population demonstrates the dichotomy of gun laws in Georgia and who they’re meant to protect.

Loosening gun restrictions in Georgia just increases the chances of further weapon incidents and school shootings happening. It is evident with the recent event that took place at Midtown that the wellbeing of the students needs to be the state’s top priority. The Georgia Senate and House of Representatives should not vote this new law into existence if they want the safety and security of its students and teachers to remain as strong as possible.