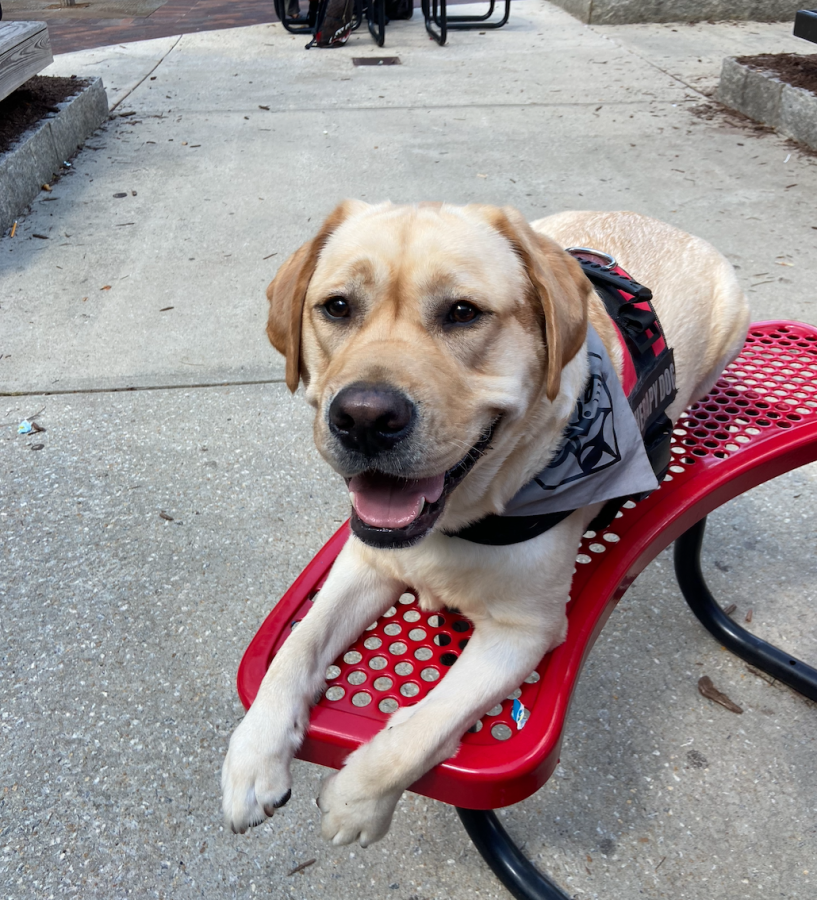 Language Arts teacher Emily Dohogne first brought Ike to school during the spring semester of 2021, when Midtown was doing a hybrid method with some students in class and some in school. As Midtown as returned to in-person learning, many students have had the opportunity to meet, pet and bond with Ike.

Dogs aren’t among the things most high school students expect to come across during class. However, seeing one at Midtown is a fairly common occurrence thanks to Ike, a certified therapy dog.

Language Arts teacher Emily Dohogne brings Ike to class with her almost every day. However, that wasn’t always the canine’s intended path. Ike was originally trained as a service dog and was raised in a prison through the Kansas-based nonprofit CARES Inc.

“CARES dogs are raised in a medical prison in Kansas for a year, for the first year of their life,” Dohogne said. “After they’re weaned off of the mom, they go to the prison for a year for all of obedience training. After that, they move to social training, which is where they learn to ignore people and to operate in public and all of those things to actually be a public service dog, in addition to the obedience part of it.”

Social training is where Ike’s life changed course, as a birth defect was discovered in his leg.

“They did a bunch of tests and x-rays.  Essentially it’s a ligament issue; so, he’s fine,” Dohogne said. “He might need surgery one day to fix it, and dogs who have any kind of predisposition to need surgery cannot be placed with a medically needy person because they have to be healthy and be with that person at all times.”

A family friend of Dohogne works with CARES and connected her with Ike. She began bringing Ike to classes last year when in-person learning was opening back up during the pandemic to prepare him for official therapy dog certification.

“He didn’t have the social training,” Dohogne said. “However, since he had all of the obedience training, he is very well behaved. When I first got him, I was like, ‘He’d be a great therapy dog.’”

“Getting permission to bring him to school was surprisingly easy,” she said.

“I reached out to Dr. Bockman (Principal Dr. Betsy Bockman), and I was like, ‘Hey, I have a dog,’ and I gave her the whole background,” Dohogne said. “I said, ‘I’m getting him certified to be a therapy dog, would you mind if I bring him while we have the smaller amount of kids here?’ She was all about it.”

“I had economics with Mr. Cowan (John Cowan, who teaches Economics), and he would come in there sometimes,” Sanders said. “It was very helpful (in facilitating interaction) because you’re in a class with one other person, and you have a dog in there, and there’s just fewer people.”

Over the summer, Ike completed his training and became a certified therapy dog. Now, with a full return to in-person learning, more Midtown students are becoming acquainted with him.

“His energy is something that is comforting when it’s high stress,” said junior Daisy Auger, a student in Dohogne’s class.

Students not in Dohogne’s class get a chance to interact with Ike as well. Language Arts teacher Mary Villalpando often has him in her classroom.

“My 2A classes are always asking for Ike,” Villalpando said. “I’ve definitely noticed the excitement when they see him.”

Students can sometimes find him in the hallway outside of Dohogne’s room between classes.

“I was really excited because I love dogs,” sophomore Fiona Bray said. “I think it’s a great idea (to have Ike in school).”

The emotional and mental support Ike provides has been valuable to the Midtown community, especially with the added pressures of the pandemic, Villalpando said.

“Especially last year towards the end of the year, kids were stressed and teachers were stressed,” Villalpando said. “It was a nice relief to have Ike.”

While contact with Ike outside the classroom is often brief, the stress relief he provides has still been noticeable.

“Genuinely, just being able to do anything to interact with him at all helps me,” Sanders said.

The joy Ike brings was interrupted when he was temporarily removed from school earlier this year for a few weeks due to a student in one of Dohogne’s classes who had a dog allergy.

“There was a whole protest,” Dohogne said. “It was hilarious, but it was also very stressful.”

Part of the stress came from the impact Ike’s absence seemed to have on Dohogne’s students.

“My attendance went down,” Dohogne said. “I have some students who really, really love him and love being around him. Some of their grades went down.”

Sanders participated in the social media campaign to bring Ike back.

“I posted ‘I like Ike’ pins to Instagram,” Sanders said. “I, of course, respect people who have allergies to dogs, but I don’t think it was fair to remove him.”

Bray was disappointed to see Ike leave as well.

“That made me feel upset because whenever I see him in the hallways, he brightens my day,” Bray said. “He’s so cute that everyone runs over, and they get all happy because it’s Ike.”

Ike is now back at Midtown and no issues from having a dog in an academic setting have arisen.

“Ike’s a good boy,” Sanders said. “There’s really no drawbacks to having him around.”