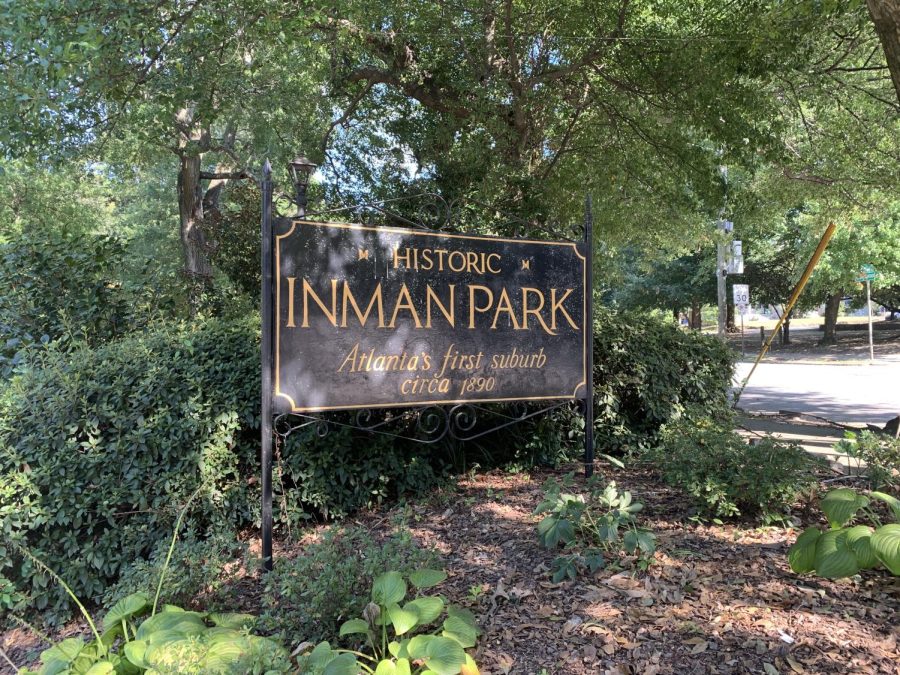 The famous ‘Welcome to Inman Park’ sign greets people as they enter the neighborhood. The signage is located at multiple locations throughout the Inman Park.

Inman Park is one of the few places in Atlanta that has stayed true to its roots throughout all of the major developments the city has seen in recent years.

The neighborhood was founded in 1889, and it has seen numerous changes and developments since. Beverly Miller, a former Inman Park Neighborhood Association president, explains the history behind the neighborhood.

“Atlanta, by the 1930s, had 400 miles of street cars. Inman Park was on a streetcar line, and it was built by a man named Joel Hurt,” Miller said. “After about 20 years, there was a little kind of recession and a lot of the big lots had not sold; so, they were divided up into smaller lots.”

“I was just a kid when we moved into the neighborhood and a lot of the homes were in disrepair,” Swain said. “But, young couples were moving in at the time and buying these homes fairly inexpensively and then renovating them.”

At the time, Inman Park was also being threatened with the proposal of a freeway that would run through the center of the neighborhood. Through neighborhood action, this plan was changed.

Karen Kelly, another resident of Inman Park, has lived there with her husband since 1988. She too has noticed many changes within the neighborhood.

“But even [in 1988] you could see that things were kind of changing,” Kelly said. “The housing prices were definitely going up. It was definitely in the area of becoming a neighborhood people wanted to live in.”

One of the things that ensured these changes supported the neighborhood’s history was the implementation of Historic District Zoning.

“One of the big changes was the Historic District regulations, which help preserve the character of the neighborhood,” Kelly said. “It means you can’t tear anything down if it’s what’s  considered contributing. Contributing means it’s anything 50 years or older.”

However, these regulations haven’t stopped the neighborhood from growing in recent years.

“Now we have all these cool restaurants and shops that are in the neighborhood that we can walk to and enjoy,” Swain said. “And that wasn’t going on so much back then.”

Not only has Inman Park seen an increase in restaurants and shops, but new houses have been built as well. Bri Erwin is another resident of the neighborhood, who moved into one of the newer additions in 2018.

“We moved specifically to Inman Park because it’s more of a progressive neighborhood, which reminded us of what we had in San Francisco,” Erwin said. “You don’t feel like you’re in the suburbs, but you are in kind of a suburb of downtown I would say, but it was walkability that makes it feel more urban.”

These new developments come with drawbacks, including a significant increase in housing prices that has raised concerns among residents.

“The other piece that I’ve always sort of worried about is that we were able to buy into Inman Park because our house was affordable,” Kelly said. “I think that’s another change where we’re not getting people getting their first homes and then staying in the neighborhood because they can’t afford them. It’s not really a first home kind of neighborhood anymore.”

Despite all of the new changes the neighborhood has seen, one thing remains constant:  the connection between its residents.

“I love being part of a community. I love that my kids went to school with everybody in the neighborhood and then middle school and high school, and they’re still friends in college, and it gives this sort of groundedness to it,” Kelly said. “I like the community spirit. You know I like that feeling of belonging and being a part of something.”