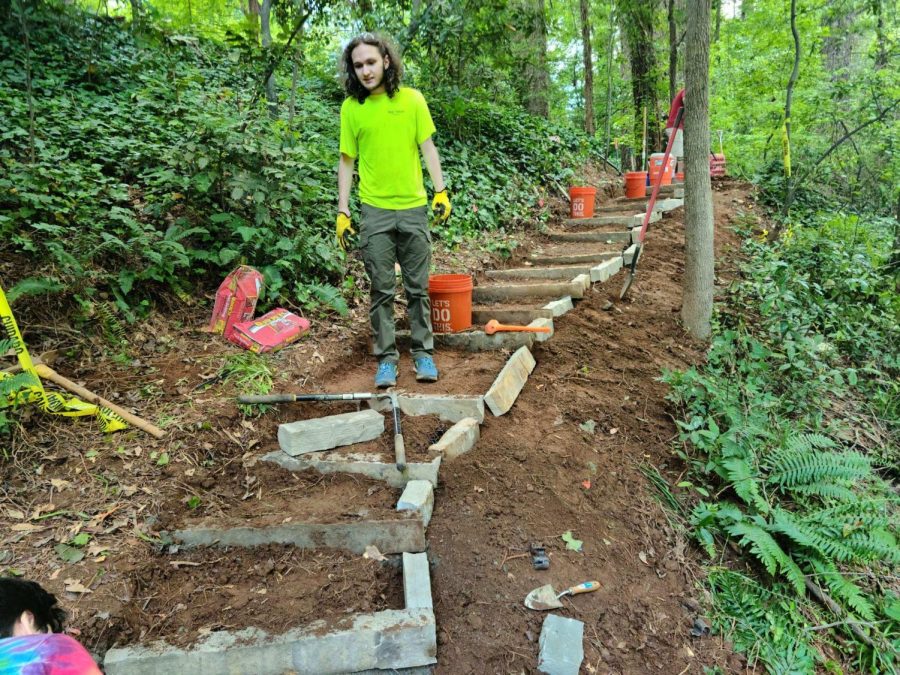 Senior Benne Ackerman developed a pedestrian walking path in Lennox-Wildwood Park, at the heart of the Morningside neighborhood

Most juniors spend the latter half of the school year taking the SAT and cramming for AP tests — but not senior Benne Ackerman. Along with answering to the trials of junior year, he spent his afternoons in an urban Atlanta forest crafting an Eagle Scouts service project to benefit generations to come.

Ackerman has been a Boy Scout since 2010. His interest in the program piqued out of natural curiosity, which has propelled him upwards of 11 years in the organization (BSA). Boy Scouts has provided him with vast amounts of responsibility and leadership skills.

“A big part of responsibility is learning how to become a more independent individual, through merit badges, such as ‘Personal Management’ and ‘Cooking,’” Ackerman said. “They teach you skills that you can use in the real world, because a large part of personal management is keeping track of your spending.“

A pivotal point in a Boy Scouts career is reaching the rank of Eagle Scout. To earn the title, scouts must complete a service-oriented project. Crucial steps include obtaining correct permits and fundraising for materials and labor involved in the project. According to a 2019 survey from BSA, only 8 percent of Boy Scouts achieved the Eagle Scout rank.

For Ackerman, becoming an Eagle Scout meant making an impact in his community, such as improving accessibility in his neighborhood of Morningside.

“There’s kind of a joke that people in scouting in this area make about having your Eagle Scout project,” Ackerman said. “They say that everyone’s project is going to be a bench, as in, that’s the lazy route. So, I find it kind of amusing — that what I did was a trail and then a bench.”

Ackerman targeted fixing pedestrian trails in Lennox-Wildwood park, an area which was previously considered underdeveloped and unsafe. The previously rocky and unpathed path provided a challenge for residents of the neighborhood. Ackerman utilized his skills as a Boy Scout and picked a project that would challenge him.

“I decided that erosion control at Morningside probably would be a bit too easy for me and I decided that the work on the previous boardwalk would probably be a bit too unsafe and a bit too hard — ultimately, I settled on the literal area in between and worked on the path to improve accessibility,” Ackerman said. “At the time, there was a lot of work being done on the entrance with the installation of a bridge and pathway that kept on starting and stopping. So, I worked on regrading the trail to improve accessibility.”

Dylan Miyake is a Merit Badge Counselor for BSA and has witnessed Benne throughout his scouting journey. While he was present at workdays for Ackerman’s project, he cited Ackerman’s leadership as “having the clipboard in hand.”

“He [Ackerman] was carrying the clipboard, and I was doing the shoveling,” Miyake said. “Really, it was Benne that drove this whole process through, from choosing the project itself to making sure that he got people involved, to actually making it happen.”

Ackerman displayed a wide range of skills throughout the course of his project, Benne’s mother, Amber Ackerman, said. From big picture objectives, like recruiting a group of volunteers and working with the park beneficiary, to analyzing soil retention of the area, Ackerman was challenged with a multifaceted project.

“The Eagle Scout project was something that he wasn’t sure that he wanted to do early on, because it is supposed to be a challenge,” Ms.Ackerman said. “He actually took it as a challenge and did a project that he thought was worthy of being an Eagle Scout project, instead of the easier route that some scouts take — to get it done and check a box.”

Lennox-Wildwood park, located at the center of the Morningside neighborhood, has had past attempts to improve pedestrian accessibility, Ms.Ackerman said.

“He [Benne] knew that there had been a trail there in the past,” Ms.Ackerman said. “People who had lived in the neighborhood in the 60s and 70s remembered this trail, and we had found some stones early on — there were a few that were that you could see.”

With a minimal foundation, Ackerman took charge to improve pedestrian safety on his own terms of his own accord .

“What really stood out to me was the fact that [Benne] built an entire staircase where there has been none previously,” Benne’s sister Amalia Ackerman said. “He actually did such a good job that several members of the community called to ask if he could build a similar one at their houses.”

As an adviser and a community member, Miyake recognizes the importance of a project like Ackerman’s.

Senior Zack Strange has been in Boy Scouts with Ackerman since the pair were in third grade.

“He knew enough people to where he could get a good turnout for the project,” Strange said. “We actually got so many people that we had some hands just standing around. When it comes to an Eagle Scout project — that’s a good thing. Then if you have an emergency, you can just give it to them.”

While Eagle Scouts is recognized as the height of a Boy Scout’s career — paving the path to gain this title is the most important for Ackerman.

“You just kind of have to go through each event, each meeting and each different experience in itself,” Ackerman said. “It’s unreasonable to think that everything would be moving towards the end goal. Sometimes you just have to enjoy the journey.”