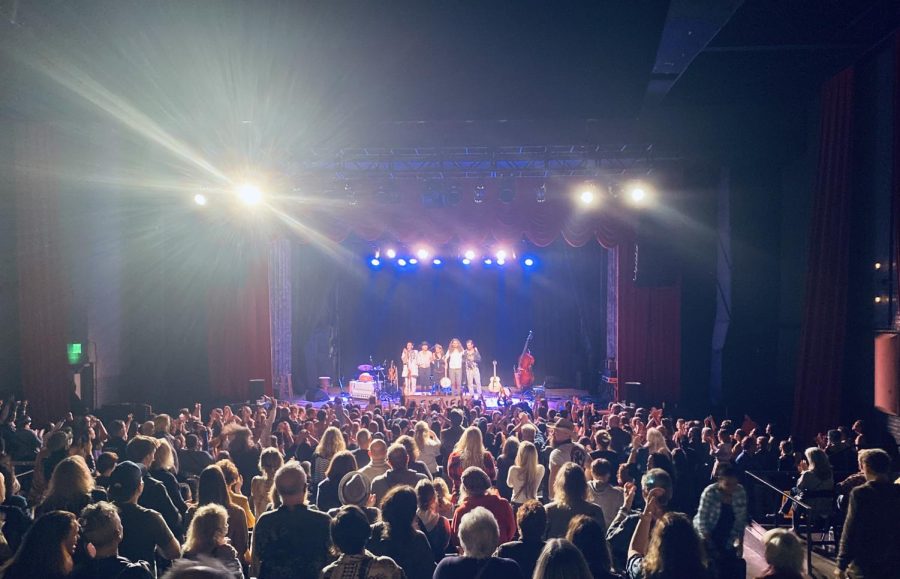 “How are y’all feeling? It’s been a little bit of a freaking whirlwind since we last saw you.”

Leah Song’s voice captured the attention of the entire crowd, from those with their hands up in the front row to the people howling on the balcony. Song, her sister Chloe Smith and the rest of their band, Rising Appalachia, received a warm welcome back to their hometown of Atlanta for the first indoor show they’ve played since the beginning of the COVID-19 quarantine.

“I like the different influences that they accumulate as they travel the world and meet new people in different cultures, so I like how that all comes together, and they create a little harmony,” Lester said

Both Song and Smith grew up in Atlanta and attended Grady High School. They graduated in the early 2000s and have since built an internationally recognized band that blends folk music with influences both from around the world and their childhood in urban Atlanta.

Rick Williams attended the concert in Atlanta and planned to see the band again at their concert in Asheville, Nc. the next day. Williams watched the concerts from the very front of the venue and said he has given the sisters gifts, including t-shirts he made that say “Dirt church is where I pray,” — an iconic lyric of the band.

“I call them the sirens,” Williams said. “Their harmony is totally incredible.”

Williams said that music venues reopening back up is an opportunity to help people like him, who have struggled with depression during the pandemic.

“People are jonesing for live music,” Williams said. “They’re struggling. I lived with depression for years a long, long time ago and hadn’t had any [but] I went through, just recently, a little bit because the solitude is killing people.”

Angie Grayson first heard about Rising Appalachia from some of her friends at a pool party. Attending the Rising Appalachia concert with her daughters was a birthday gift from her husband. It was her first time seeing the band live.

“[I am attracted to their music because of] the importance of the words, their musicality…and originality,” Grayson said. “I’m very excited.”

Danielle Brown said she was “hooked” by Appalachia almost 10 years ago. She gravitates toward the sisters’ music because of “the message, the vibe, the beat [and] the spiritual vibration in their music.”

In addition to their live performances, Rising Appalachia also hosts “Permaculture Days,” which focus on regenerative and sustainable systems of agriculture and giving back to the community. Rex Payne, who was at the concert with his daughter, first heard about Rising Appalachia in Knoxville, Tn. He said they were so good, he followed them to Asheville the very next night. Payne has attended Permaculture Days and said he feels that through their community initiatives and lifestyle, the band embodies the messages they spread through their music.

“[I gravitate toward their music because of] their message, the causes they promote,” Payne said. “I’ve always felt accepted at these shows. The music of love is what it is. They live their music.”

Brown said she pulled her daughters out of school to attend one of the permaculture events where she met Song.

“The three of us went to go do the event and the girls got to meet them,” Brown said. “Leah [Song] has the most incredible energy of any female I’ve ever been in the presence of…you can feel it.”

The band’s setlist consisted of songs from across their albums including the songs “Harmonize,” “Wider Circles,” “Resilient,” “Make Magic” and “Catalyst,” a song from their most recent album, “The Lost Mystique of Being in the Know.” Integrated in the rhythm of their music is a social commentary.

Like Williams, Payne also planned to follow the band from Atlanta to Asheville for their last show of the tour. He said seeing the show multiple times “just adds to the experience.” The Asheville show will be Payne’s 21st Rising Appalachia concert.

“A lot of times, I’ll do two or three shows in a row,” Payne said. “[My daughter and I] have done their shows…for the last three or four or five years. It’s kind of our thing.”

Brown brought her friend who has never been to a Rising Appalachia show before.

“Just wait until it is actually unleashed on us,” Brown said. “You’re not going to walk out tonight the same person you walked in, guaranteed.”