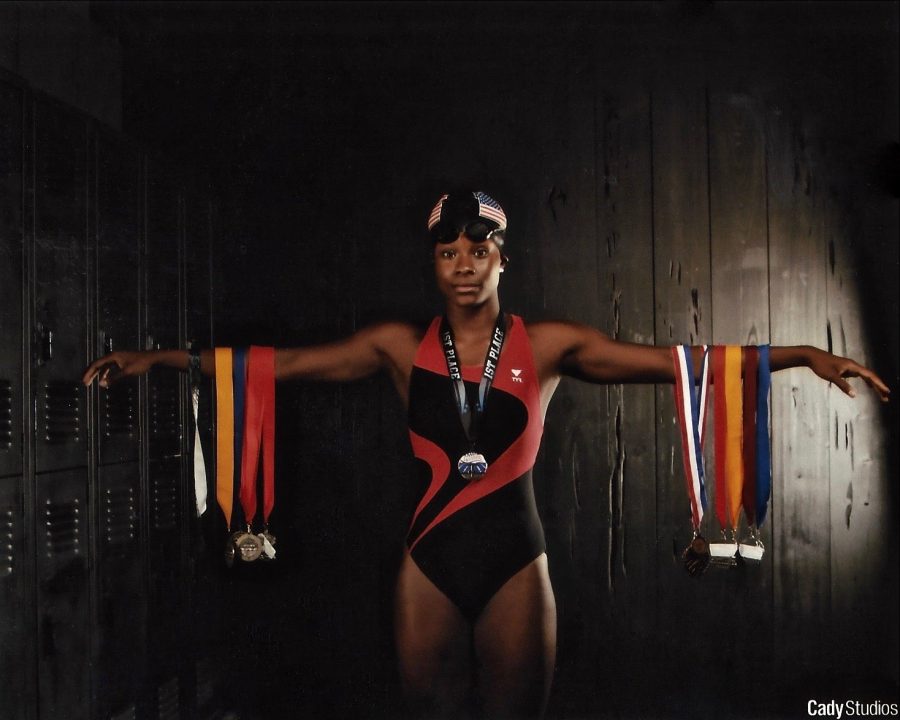 From 2013 to 2017, Grady alum Melissa Brown set records in almost every event she swam in. Four years after graduating, Brown has returned to the school, no longer setting school and division records, but coaching the next generation to break them.

“I think I built a lot of character, from freshman year to senior year,” Brown said. “It taught me that it doesn’t matter if you’re the best athlete or the best jock. Everybody has their own personality, and you should not judge anybody because you never know what they are going through.”

Brown was recruited to swim at the University of North Carolina at Asheville in 2017 and joined the track and field team her junior year. She was the first African-American to swim and receive a scholarship at UNC Asheville. After graduating in May of 2021, current Midtown head coach Adrienne Wesley offered Brown an assistant coach job.

“I reached out to Melissa because I thought Midtown needed a coach that is accomplished, can relate to the students and receive respect from the community,” Wesley said. “I have been watching her since she graduated, which was in my first year of coaching.”

“She understands,” Wesley said. “She knows what it’s like to be a high school swimmer. She stood on stage with a metal representing not only Grady, but APS. She signed a dual scholarship. She experienced college and its challenges. She has tried for the Olympic Trials. She has done it all.”

As a coach, Brown hopes to use her personal experiences to relate to the current swimmers.

“I love getting to see the other perspective, or the other side of the pool deck,” Brown said. “I obviously was a swimmer, and I’ve always been the student. Now that I’m the coach, it’s really been a learning experience. Just to take what I went through to just remind myself that, “Hey, the swimmers might be going through the same thing,” or just knowing that I was in that position. I try to really connect with them.”

Wesley values her relationship with Brown.

“I love working with Melissa,” Wesley said. “She is fun; she is creative; she values the position. She is a part of a small group of black swimmers and black women in collegiate swimming. I am a part of the community that takes care of them by supporting them in any way we can.”

Brown’s time coaching at Midtown has evoked plenty of nostalgia.

“I decided to come back because it was just a full circle moment for me,” Brown said. “Why wouldn’t I help a team that I was a part of and really loved? Some of the kids I now coach, I swam club with when we were younger. A lot of their siblings I actually swam with at Grady, so it’s really interesting, and I love to see it.”

Co-captain and junior Jory Richardson is the current record holder of the 100 butterfly and 100 backstroke, in addition to recently breaking Brown’s record in the 100 free. Brown remembers participating in club swim with Richardson when she was younger, and admires the improvement she has made.

“Before I went off to college, I swam with Jory,” Brown said. “I’ve literally seen her grow into the swimmer that she has become. Seeing her go from just being average to getting national cuts is crazy.”

“Because of her high school and college swim experience, she knows what she is doing tactically and pushes us in the right ways,” Richardson said.

Co-captain and junior Riley Browning appreciates Brown’s experience being a student-athlete at Grady.

“She brings a positive energy to the team and makes practices more enjoyable,” Browning said. “It helps that she was a Grady swimmer in the past because she gets it. She really understands it and the struggles of being a high schooler and being a student athlete.”

Although Brown didn’t expect to venture into the world of coaching, she is grateful she did.

“Four years ago, I walked off a podium, and to think that I would come back, I never expected it,” Brown said. “I had thoughts about it as a kid, but I was like, ‘They don’t ever want me to coach. I would never,’ and then when they [Midtown] reached out to me, it was like, ‘Wow.’ So I’m really excited about it, it doesn’t even feel real. There would be no other place that I would want to start coaching.”