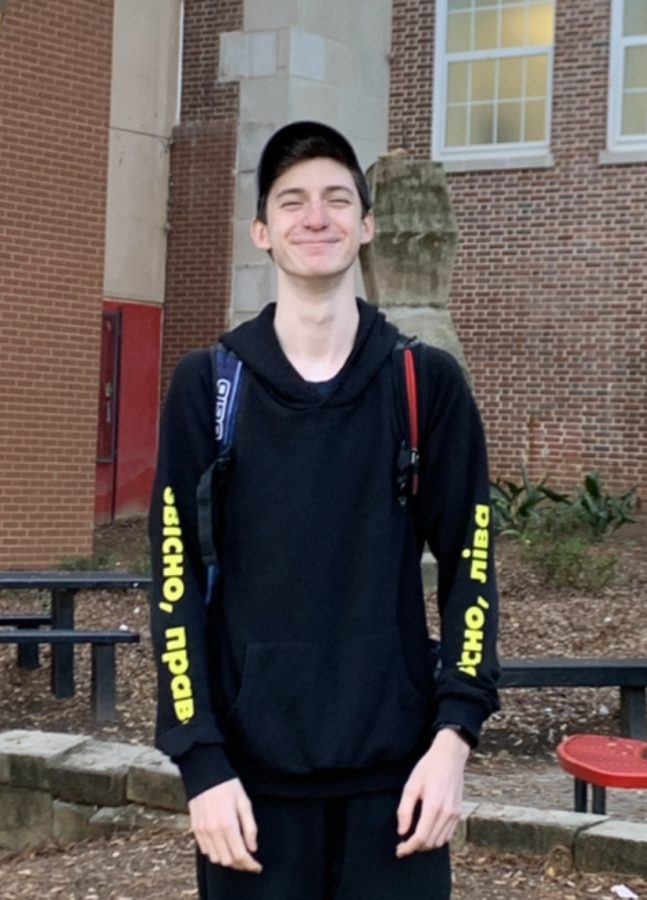 Nahornyi smiles in the courtyard prior to an FBLA meeting. Nahornyi reached nationals for FBLA last year in “Introduction to FBLA” and continued to participate throughout the summer.

It has been no easy journey for sophomore Vadym Nahornyi. He moved to the United States at the age of 8 without knowing how to speak English well. Despite the difficulties of living in a completely new country, Nahornyi adapted well and is now the 10th grade class representative.

Before moving to Atlanta in 2016, Nahornyi lived in Tampa, FL., but had previously lived in Kyiv, Ukraine. For Nahornyi, one of the biggest differences between Ukraine and the U.S. is the way people interact with others.

“Here [in the U.S.], you can just come up to pretty much anyone, and you can talk to them,” Nahornyi said. “They’re happy to talk to you. No one is like that in Ukraine, as people are ‘closed’ in Ukraine. You have to know the person to even ask for advice.”

The process of immigrating to the United States was not a simple task for Nahornyi and his family. Nahornyi says that when he and his family arrived at Hartsfield-Jackson International Airport from Kyiv, the immigration officers seemed to have trouble with their documents.

“We were held at the airport for around a day,” Nahornyi said. “From 8 p.m. to 7 a.m., we just had to stay at the airport to actually get into the country.”

When Nahornyi began to attend elementary school in Tampa, his limited English skills made school tough.

“Doing any well at school, trying to understand the teachers, trying to find friends and trying to get involved was difficult when you don’t know the language,” Nahornyi said. “That was the biggest problem I was faced with, and I had to learn the language by reading books.”

However, now, Nahornyi prefers the U.S. compared to Ukraine, even though he misses his friends in Kyiv, because of how friendly everyone is. Friendliness is a factor that has helped him acclimate to the new environment.

“It took me a long time to understand [American culture],” Nahornyi said. “But, I liked how everyone is welcoming and open to new people. It helped me adapt and find friends.”

Nahornyi has exemplified his ability to adapt in his new role of sophomore class representative in the Student Government Association (SGA).

“I saw the information about [the election for class representative], and it felt like it was a great opportunity,” Nahornyi said. “I thought this was going to be the best opportunity for me to show and demonstrate leadership skills.”

As class representative, Nahornyi has helped organize Spirit Week and ensured that information is more widely available to students. Sophomore Eamon Walsh, a friend of Nahornyi, believes Nahornyi has been successful in his role thus far.

“I definitely feel like he’s doing a good job of bringing the 10th-grade voices to the table,” Walsh said. “He’s done a very good job of networking and putting his name out there as the representative.”

Sophomore Vice President Claire Diem said her duties primarily entail work on managing and planning, while Nahornyi acts as a liaison between SGA and 10th grade students. Diem believes Nahornyi is a good class representative since he is outgoing and good at communicating.

“When decorating the E200 hallway, he organized the supplies we needed and communicated that to Ms. (Blair) Barksdale and Ms. (Susan) Barber,” Diem said. “He also always communicates updates and reminders to the 10th-grade GroupMe, which is really helpful.”

SGA teacher sponsor Barksdale says Nahornyi is suited to be the class representative because of his leadership qualities. Barksdale also highlights Nahornyi’s efficiency in organizing events and getting students involved in school-wide decisions.

“A lot of times, sophomore and freshmen are nervous and hesitant to bring stuff to the group because they’re younger,” Barksdale said. “However, he always comes with their ideas. His class respects him.”

FBLA teacher sponsor Stacey Tanner believes Nahornyi is driven and hardworking. Nahornyi reached nationals for FBLA last year in “Introduction to FBLA” and has continued to participate throughout the summer.

“I was like, ‘Okay, we’re going to lose this kid — it is FBLA in the summertime, and we’re all virtual,’” Tanner said. “But, he still emailed me and asked me what he needed to do. I saw that as a tremendous honor. It spoke to me about his character.”

From his experience in FBLA, Tanner believes Nahornyi can gain a greater leadership role in the future.

“I can see him being the president, or even a state officer,” Tanner said. “He motivates the other kids, and he tries to encourage them to participate. He has a very good spirit and vibe.”

Nahornyi believes being an immigrant may have put him at a disadvantage in the past when running for class representative.

“Your name might not be as out there as if you were embedded in the school community since elementary school,” Nahornyi said. “That was the main issue.”

Nevertheless, Nahornyi wants to run again for class representative next year due to how the position has shaped his personality. Barksdale believes if Nahornyi runs and wins again, he will only grow as a leader.

“If he runs, I see him having a good career next year,” Barksdale said. “I think he’s going to make a huge impact on SGA.”