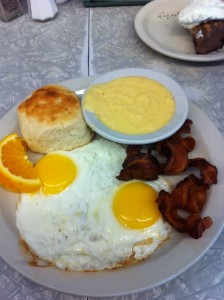 When I started writing this article, I realized how small a part of my diet biscuits were. However, like any other food that you eat too much, you become a conossieur. You learn to appreciate the little things, like the way a biscuit tastes with and without jam, the way a biscuit breaks apart, and even the texture of the biscuit.

Determined to give biscuits their shot at the limelight, I toured around Atlanta, stopping at some of the most popular eateries on my quest to find out which restaurant can boast that it has the best biscuit.

There’s a groovy joint located on Ponce de Leon Avenue called Java Jive that proudly displays outside of the restaurant a banner that reads “Voted Best Biscuits by Atlanta Magazine.” With high expectations, I walked through the front door into what almost felt like an overboard attempt at a ‘60s or ‘70s diner. The walls were decked with random memorabilia from restaurants and companies like posters, little dolls, and in the waiting room there must have been three or four old ovens that were used in restaurants back then.

Since this is the first biscuit I reviewed, I want to preface it with the factors I used to determine the quality. A biscuit had a high rating if it had a perfect consistency; like when you pull open the biscuit and the few last threads of dough cling to the other half.  Other characteristics included texture, originality, and overall taste.

Picture the Pillsbury biscuits: solid, uniform rounds of dough that don’t differ a lot in taste. Honestly, that’s the picture I got with this biscuit. By no means did it taste good, but the look and feel of it reminded me of something I would cook for myself on a lazy Sunday morning right out of a package. Not exactly much to write home about.

The Thumbs Up Diner is a hip restaurant on Edgewood that has a lot of features similar to a 24-hour diner like the majestic. The major difference is that it’s not open 24 hours and the food is actuality good. Here I experienced the first of many long lines and as a result I decided to go ahead and get the biscuit to go.

True to the diner’s name, I’d give it two thumbs up. Their biscuit was a little darker, so I’m assuming it was made of wheat flour. It wasn’t too crispy, but was a little on the doughy side. Regardless, it was delicious; a biscuit that differentiates itself from the others but doesn’t fall behind in taste.

Ria’s Bluebird doesn’t sound like the name of a restaurant, but it’s definitely worth the trip.  The waitress there eagerly told me how their biscuits were made from scratch every morning in a pan so that they resembled cornbread. As I walked out with biscuit in hand, I could  feel how warm and soft it was. It was square-shaped, but still had all the fluffiness of a circular biscuit. My mind kept going back to cornbread because to the untrained eye, it wouldn’t appear to be a biscuit. There was a nice crispy layer on the bottom, but the one drawback was that it was difficult to split the biscuit in half to put anything in between. Despite that shortcoming, it was one of the best biscuits I ate.

I headed to my next destination with tremendous expectations, as the Flying Biscuit is heralded by many as the the default best biscuit in Atlanta. This claim makes sense, though, because it’s the only restaurant I went to that offers biscuits as it specialty. When I arrived there and ordered, however, the woman at the counter pulled my biscuit off a shelf in a matter of seconds. At this point I had been to four different restaurants, and this was the only one who didn’t even serve my biscuit warm. It was rather dry, and there wasn’t a lot of flavor, but the redeeming factor for the Flying Biscuit is their apple butter served with every biscuit. Overall though, it was a lackluster biscuit that failed to make my taste buds soar. As my server at Radial Cafe told me about their biscuits, the infamous Atlanta bakery is called The Flying Biscuit because when you figure out you don’t like them, you just let ‘em fly. They’ve become too notorious for their biscuits, causing their business to expand which decreased the overall biscuit quality.

Lastly, with little time remaining before most brunch restaurants closed on Sundays, I walked into a cool cafe along Moreland Avenue named the Radial Cafe. While mostly being known for their environmental awareness, Radial’s entry for best biscuit would have to be my sleeper pick for best biscuit. I did have to wait a little bit longer, but it was obviously worth it. The biscuit was nice and warm, slightly crispy, and was served with some of the best marmalade I’d ever tasted.

The next stop was a vintage diner named The Silver Skillet. It’s one of those places where you go for the atmosphere more than the food. However, the AJC held a contest to determine the best biscuit and the readers chose this diner so I knew I had to give it a try. The biscuit was ready in seconds, a sad sign, and handed to me by the cashier who spoke with a southern drawl. I was thoroughly underwhelmed by the biscuit, not because of it’s taste, but because of its size. The flavor itself was incredible, even a little salty, great with jam, but it left me wanting more.

Now, I know the phrase “saving the best for last” gets used often, but I don’t think it was ever more applicable than now. I debated whether or not the journey out to Memorial Drive would even be worth it, but I’m grateful I decided to go, as I would say that the best biscuit I ate was at Home Grown, an exceptional diner in downtown Atlanta. The place was packed when I got there, with parking spilling over the lot that forced me to park about two blocks away. The waitress there guaranteed me that I would find the best biscuit there, and the biscuit she served me proved me right. The biscuit was everything I wanted. It looked completely symmetrical with nice crisp layers. The biscuit was fluffy on the inside which complemented its crispy outside. It split right in two, perfect for spreading out whatever you desired. It was undoubtedly the best biscuit I had eaten.

If you want the best biscuit in the city of Atlanta, get down to Home Grown and you won’t be disappointed.