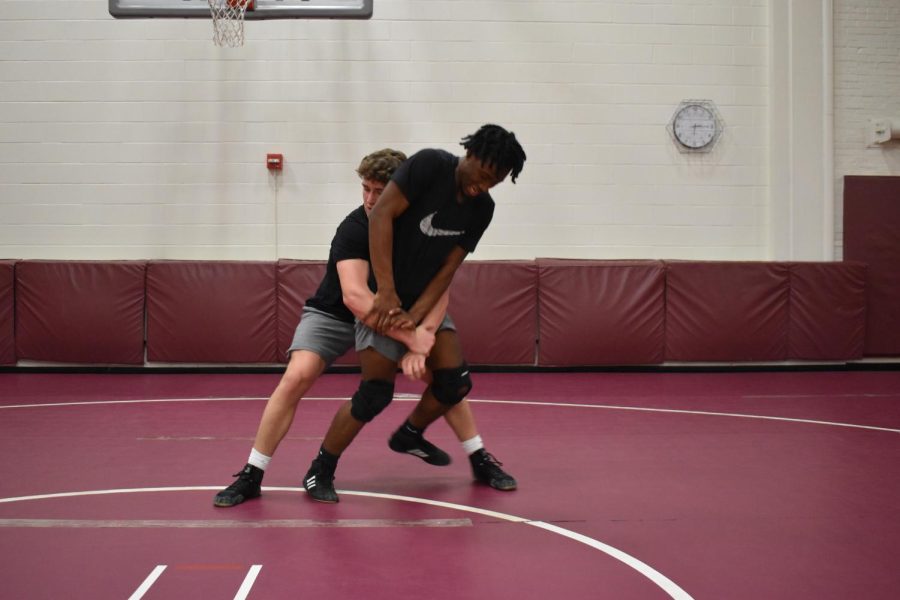 The wrestling team is excited about getting back out on the mat after only competing in two regular-season meets last season.

“We’re obviously coming off of a hard season like everybody else; 2020 was tough,” said co-head coach Josh Crowder, who resurrected the program in 2018 with the help of co-head coach David Bunker. “Numberswise, we’re definitely not where I want to be, but to be honest, we haven’t been where I want to be for the last four years.”

Currently, the team has eight wrestlers — one sophomore, four juniors and three seniors. Four are first-year wrestlers. Last season, the Knights started with eight wrestlers, but due to Covid-19, they finished with only two — then-sophomore Liam Doherty and then-junior Elijah Francis, who is now a co-captain.

“We have almost a whole new roster,” Collins said. “We had some people leave last season, but we have a bunch of new guys who are really motivated to work, and I think it’s going to be a good season.”

Some of the new additions to the team have experience.

“We have two people with martial arts backgrounds,” Collins said. “Finn does MMA fighting, and we have a senior named Anderson Culbreth who does judo.”

Although initial practices were spent teaching the basics of the sport to the new wrestlers, Crowder said reviewing the fundamentals of wrestling is beneficial, even for experienced wrestlers.

“We teach from the very beginning because you can’t have a skyscraper with a bad foundation,” Crowder said. “Really drilling the basics and techniques is our main focus.”

A major key to success for Bunker is “keeping up morale.” One tactic he and Crowder have taken to achieve that is creating a point system that acts as a currency, awarding wrestlers who work hard at practice.

“The point system really gives us an opportunity to gamify practice a little bit and let loose,” Bunker said. “At the end of the week, we’ll hold an auction, and whoever has the most points can be like, ‘I want to spend my points on dodgeball.’”

Last season, the team sent then-first-year wrestlers Doherty and Francis to compete in the State 5A meet, where both wrestlers competed in the first round but no further. Bunker’s goal this season is to build off the early success the young wrestlers found in thepast season.

“What I would like is for the amount of athletes we have this season to not decrease, and I would like to take them all to state,” Bunker said. “We’ve taken athletes to state before, and I think we can do it again, but more.”

In addition to sending more Knights to the state meet, Crowder hopes to teach his wrestlers important life lessons throughout his time coaching the team.

“Obviously, I like to win, but the thing I care most about is building exceptional people,” Crowder said. “Honestly, even if we don’t win a lot, what I want is to teach our wrestlers how to be decent humans and succeed outside of wrestling. I personally love this sport and think it is an excellent conduit to teaching what needs to be taught outside of wrestling.”