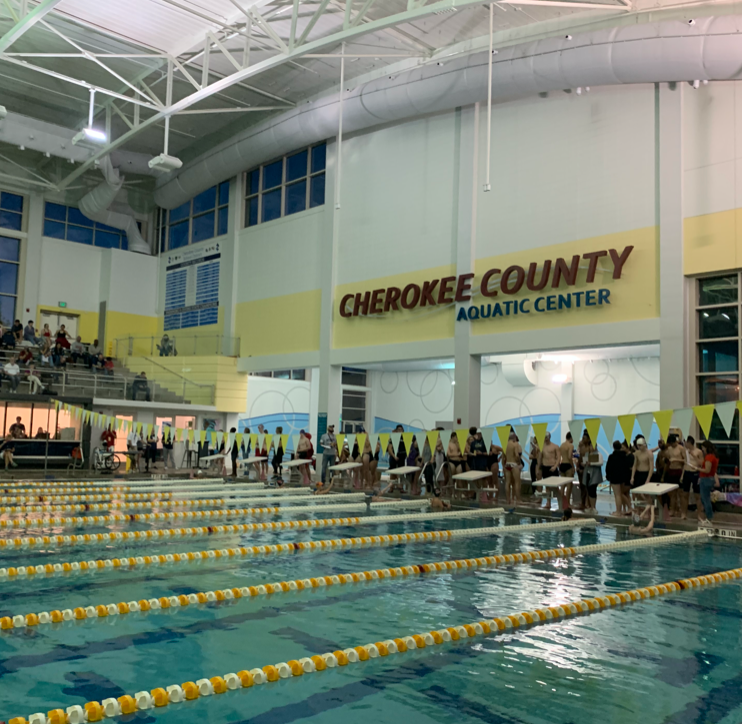 The Midtown swim team competed at their first meet on Thursday, Nov. 11. They placed fourth out of eight at the River Ridge meet.

In the wake of a record-setting state meet with the most medals in school history, the swim team will attempt to maintain and improve its performance this season.

The team opened its season at the River Ridge meet on Nov. 11 at the Cherokee Aquatics Center, placing fourth of eight teams. Junior co-captain Jory Richardson, who won the 200 and 500-yard freestyles, was satisfied with the team’s performance.

“[The meet] went really well,” Richardson said. “I won my individual events, and both our relays got third place for the girls. People were actually good at making their events and not missing them. It was hard to do this meet because we didn’t really warm up that much because we got there late, but all things considered, people swam pretty well.”

Following its first performance, Midtown lost a dual meet to St. Pius on Nov. 16. The team was missing some key swimmers, including Richardson and senior Liam Bray.

Head coach Adrienne Wesley said the team is moving in the right direction, despite the loss of graduated seniors last season
“I think last year the team did amazing, especially for it being a COVID season, and we ended really strong,” Wesley said. “We got individual medals and are now ranked high in the state. What is so great is that we lost some great seniors, but we inherited some really great freshmen. The seniors this year have been on the state team since they were freshmen, so this is going to be a really big year for them.”

Wesley chose eight captains to share the load of leading the team. These individuals carry out a variety of tasks, including helping to lead morning practices, warmups at meets and dryland (out of the water) practices. Despite the many responsibilities delegated to captains, captain and junior Sarah Prevost said it is sometimes hard to get all captains together.

“It feels a little bit frustrating being one of eight captains, having to discuss everything with all the captains and not having all the captains be able to be at every practice and see them all the time,” Prevost said. “But, it’s exciting to help lead the team that I’ve been on for four years.”

Melissa Brown, a 2017 graduate and new addition to the coaching staff, swam at Grady (Midtown’s former name) for four years and is the current school record holder of the 50-yard Freestyle. Wesley said bringing in Brown will give the team someone to relate to.

“As a coach, I’m setting up opportunities like bringing in coach Melissa for them to get that experience from her,” Wesley said. “She’s been where they are. She was college recruited to swim. She’s young, and it helps to have something tangible that they can kind of look up to.”

Prevost agrees that Brown’s experience helps with her coaching and understanding of the team.

“I think that she knows swimming well enough to provide good sets, so everyone knows what intervals to put things on,” Prevost said. “In the past, we had [another coach] who would mainly run practice, especially for the faster group, but I think that Melissa is definitely able to keep that up and challenge the team to help us get better.”

Brown is excited to see the team improve.

“I told them, you are not going to do your best time all the time, but we have time to improve and get the stroke right and get the times that you want,” Brown said. “Just seeing the end result is what I’m excited for and the progress along the way.”

Wesley’s coaching philosophy for this season will also revolve around disciplines outside of the pool, like promoting good habits that support stable and strong improvement in the water.

“Healthy minds, healthy bodies, and helping their attitudes is important,” Wesley said. “We know that they have skill;so, now we are focusing on having good character, making sure that you’re going to practice on time, the accountability piece. You are at practice, every practice, you’re having every opportunity that you can, so that you’re able to be successful when you get in the water.”