More out-of-zone students should be allowed to attend Midtown 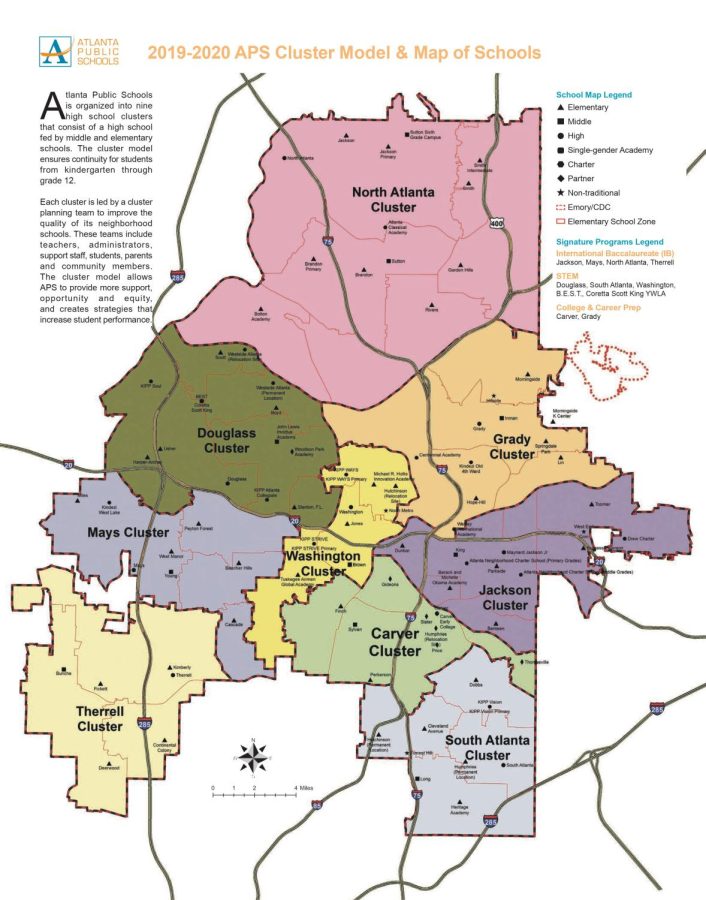 A student's ability to attend a higher performing school such as Midtown hinges on whether they live on the right side of the arbitrary attendance zone boundaries, creating an increasingly exclusive community.

The school a child attends can have a tremendous impact on their socialization, academic outcomes, development and social mobility. About 90 percent of students in the United States attend public schools, where households are often assigned to schools based on district-drawn attendance zones. The result is limited educational opportunities for many students.

From 1991 to 2011, Midtown High School (then Grady High School) served as the communications magnet school for the district, and allowed out-of-zone students interested in the magnet program to attend the school. When Atlanta Public Schools moved away from the magnet program system, however, out-of-zone students seeking to attend Midtown were left with limited pathways to do so.

The magnet program was replaced by a plan emphasizing neighborhood schools and putting every school in the district on equal footing. The purpose of this plan was to replace the previous system with one that kept students in their neighborhood school and in their designated attendance zone, shifting the magnet curricula into pathways at each local school.

However, inequities between APS schools still remain. In 2020, Midtown had an average SAT score of 1112, above the district and national average, while schools in lower-income neighborhoods such as Washington and South Atlanta had significantly lower SAT scores. Housing costs and school quality continue to go hand in hand, and students at schools in lower-income neighborhoods continue to suffer from unequal educational opportunities.

In APS, official boundaries between schools are established by the Atlanta Board of Education, and students are now required to attend the school in the zone they reside in. Currently, some out-of-zone students are allowed to transfer to schools below capacity through special permission, although this is at a principal’s discretion.

As a result of a 2014 APS investigation into ineligible out-of-zone football players using fake addresses to fraudulently attend Midtown, more stringent enforcement of out-of-zone regulations was implemented. This implementation, along with capacity limits due to increased enrollment, has caused the number of out-of-zone students at Midtown to decline in recent years. According to a 2021 report from the Georgia High School Association (GHSA), Midtown has only 22 reported out-of-zone students.

While Midtown administrators have stressed the importance of serving the students within the school’s attendance zone over out-of-zone students, this is an arbitrary distinction that perpetuates educational disparities across the district. Midtown consistently performs above the APS and Georgia averages in the College and Career Ready Performance Index (CCRPI), SAT scores, and graduation rate. In 2020, Midtown’s average SAT score was almost 200 points higher than the district’s average, and graduation rate was 10 percentage points higher as well. However, whether a student is able to attend Midtown hinges on whether a student lives on one side of the attendance zone boundary line or the other.

Many parents who are seeking to provide their children with access to the educational opportunities of higher-performing schools are impeded by the real estate prices of the neighborhoods that shape Midtown’s school attendance zone. As of September 2022, housing prices in the Midtown attendance zone ranged from approximately $400,000 to over $1 million while two bedroom apartment rents ranged from $1,300 to more than $3,000 per month, according to Zillow.

Households with children, including low-income families, strongly consider school quality when moving to a different neighborhood. However, traditionally higher housing prices surrounding higher quality public schools increase even more as the demand for living within that attendance zone increases. A 2019 report from the United States Congress Joint Economic Committee found that median home prices were four times as high in neighborhoods associated with the highest quality public elementary schools than those associated with the lowest quality public elementary schools.

High housing costs prevent many families from being able to live within these school zones, and in turn, prevent many lower income students from attending higher-performing schools. In 2019, 72 percent of Midtown students scored proficient in English and 54 percent in Math. At Washington High School, whose attendance zone borders that of Midtown but has consistently lower average housing prices, only 20 percent were proficient in English and 7 percent in Math. The result is a growing divide in quality, as well as de facto economic and racial segregation, in public schools in Atlanta and across the country.

However, there are tangible steps that Midtown can take to bridge the divide. The addition of the new school building should increase the student capacity and enable the school to accept out-of-zone students again. Midtown must reverse its harsh restrictions and enforcement of those restrictions on out-of-zone students, realizing that its current policy discriminates against lower-income households that cannot afford to live within the attendance zone and creates an increasingly exclusive school that shuts out students not only from the education that they are seeking, but also the opportunities that come with that education.

Long-term solutions can also extend from the school itself to city-wide initiatives. A number of other school districts in cities throughout the United States have open enrollment policies that allow students to attend public schools outside of their designated attendance zone. While Georgia currently mandates that student transfers between schools within the same district must be allowed, capacity provisions and school board approval limit the extent to which households can take advantage of these opportunities. However, APS already has a number of charter schools which are more inclusive in allowing out-of-zone students to attend, and APS should extend similar inclusive open enrollment policies to all schools within the district.

Midtown should be eager to accept out-of-zone students into our community. By giving students who are looking to further their education the opportunity to do so, our school community would benefit as well by fostering a more inclusive environment.

Midtown and APS should be committed to providing the best educational opportunities to all students, and that means enabling lower income students to attend higher-performing schools out of their designated attendance zones. As housing costs price many lower income households out of Midtown’s attendance zone, it is crucial that out-of-zone students are welcomed into our school and our community.