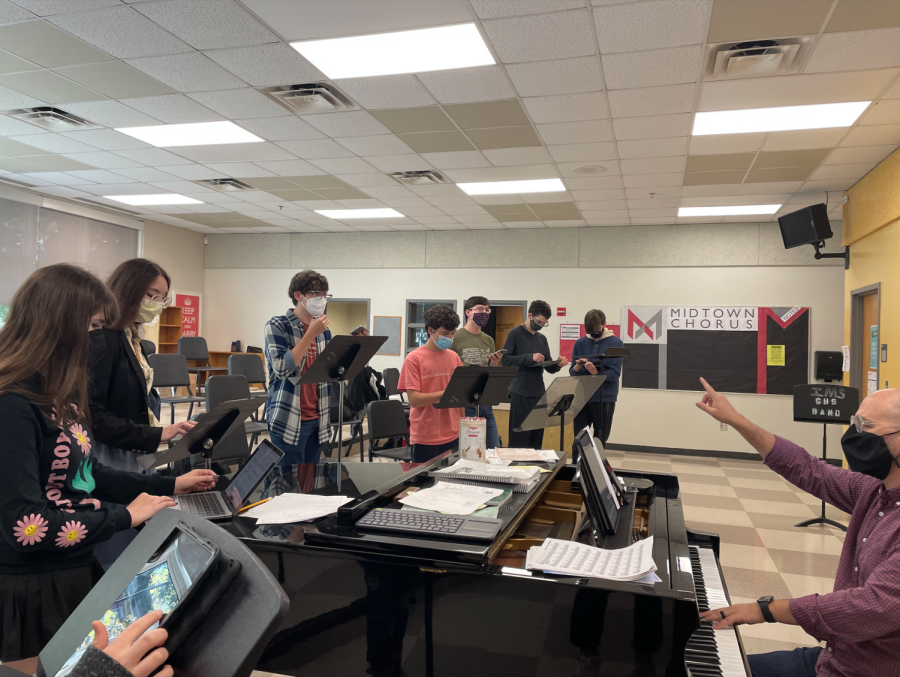 With the resurfacing of chorus, orchestra and band concerts, one group of musicians stand out from the rest. An a cappella group, Voxology, offers students a unique opportunity to share their voices.

When Midtown chorus teacher and Voxology director Kevin Hill began at the school in 2002, it barely had a chorus program.

With just 16 students in the club, Voxology includes some of Midtown’s most talented singers.

“At the beginning of each year, we do auditions,” Hill said. “The auditions are based on singing ability and reading ability. It’s typically folks that are in chorus, but we have opened it up to kids who can’t get into the class, due to schedule issues. It really requires students that have the best voices for the part but then also have the best reading ability because we have to learn the music quickly.”

During the 2020-2021 virtual school year, Voxology continued to meet via Zoom meetings. However, some students felt as though the energy of a cappella was lost in the online world.

“It was a lot harder online because so much of acappella is the connection with people,” senior Tui Brattain said. “With the chorus online, there was lag for Zoom, so we couldn’t all sing at the same time. So, you’re basically singing your part on your own, it was really frustrating. One of the most exciting things about acappella is the energy of being with people. It’s reliant on being a group activity, and being by yourself in your room was not the same.”

Brattain’s passion for music peaked when she saw Voxology perform at a chorus concert her freshman year. Her inspiration led her to join the club her sophomore year.

“My friends did Vox, and it sounded really fun,” Brattain said. “I really enjoyed the feeling of the chorus and the connection you feel between other people when you’re singing with them. And then, doing that in a smaller group where it’s acappella, you can’t rely on instruments. It’s a really interesting exercise where you have to rely on people. And so, I thought to myself, ‘that sounds like something I want to do.’”

Some students said they were inspired to join Voxology by popular a cappella movies, like “Pitch Perfect.”

“Vox is special to me because I was obsessed with ‘Pitch Perfect,’” senior Brady Stroppel said. “There’s something pretty special about not being able to use instruments and making instrumental sounds with your voice, it’s really interesting. It’s a very fun opportunity, and the people are super great. Mr. Hill is fantastic.”

Junior Haven Li has been in Voxology since her freshman year, but took a break her sophomore year because of the pandemic.

“I actually decided against auditioning for Voxology last year because I don’t find virtual performances to be as rewarding, I’ve heard it wasn’t exactly favorable in an online setting,” Li said. “I think Vox is different from other clubs at Midtown because while it’s fun and casual, we also get experience in reading music and learning our distinct harmonies. Everyone in the club is very talented and dedicated, but the atmosphere is still light and we all have a lot of fun.”

“We did Voxology during virtual school, which was more of a struggle to find the practice time,” Hill said. “There were some good things that came from that. Some of the kids that had to learn how to be more independent with learning their part, I wasn’t there to bang the notes into them and to help them out.”

As opposed to chorus, Voxology allows students to select more pop songs, such as those from the Beatles, BTS and ABBA.

“I want people to know that these are some of the best musicians we have at this school,” Hill said. “They are great singers, all of them. In chorus, we can’t just always focus on just the fun, pop stuff, but in that group, they get to choose what they want to do and have fun with it.”

Some students appreciate the casualness of the club and the ability to take on more of a leadership role.

“It’s really fun to work in tandem with Mr. Hill because he lets us codirect the pieces we choose to perform,” Li said. “No one is ever left out, and there isn’t any vocal part that’s more or less important than the rest. It’s really hard to feel nervous or anxious about singing in front of other people when you’re surrounded by a group of performers who like what they do and do it well.”

The connection the students develop with each other contributes to the creation of the best vocal performance possible. However, for some students, the reliance and timing can be more difficult than it seems.

“The hardest thing about acappella is keeping time,” Brattain said. “You don’t have anything to rely on. So, if the person doing percussion messes up, then you all mess up. You’re all relying on everyone else. But also, the hardest bit is that there is just so much going on. There are so many layers; everyone has a different part.”

“Being in person with people rather than online was just so much better,” Brattain said. “You get so much more work done because you can hear other people, but also just being able to sing with people is so rewarding. There’s something very satisfying about listening to a whole piece come together, and everyone knows their notes, and the harmonies are good, and everyone’s pitch is right, and it’s just so special. It’s a very empowering feeling.”